I built this to illustrate an article where the CSS Tuscaloosa attacked the yankee clipper Snowsquall. After I had built it, I found I had built the wrong one, the ship that attacked Snowsquall, was not an ironclad, but a conventional sailing warship of the same name! So it was consigned to our small display cabinet where it has remained ever since. It only took about three hours to build! The black and white picture is the last mortal remains of the Snowsquall that I took in Port Stanley, Falkland Islands in 1982. In 1983, still in Stanley, I met the American team who were surveying the remains prior to taking it back to the US. That has now been done!
Bob
PS
The Snowsquall got away because of her superior speed! 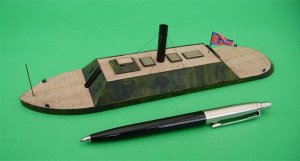 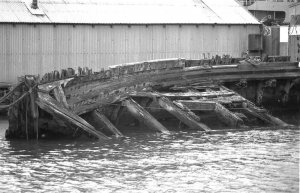