Finally, I came to the point that I can start on something different than Sovereign of the Seas and Le Soleil Royal. This is a project which I have been thinking of for a long time. I was making lots of inquiries regarding her plans but all turned out to be dead-end streets. A model (actually two) of her had been done by a Russian model builder Narim Majgeldinov (one of them is said to be sitting in the office of the Russian Premier). I tried to contact him a number of times but I did not receive any answer at all. There are a few pictures of one of the models at www.shipmodels.com.ua. This shows a narrow cabin, there are also some pictures of another one with a full-width cabin. This model is an Admiralty type which is I think a contradiction in itself because the original ship has been built in the Low Countries where the English shipbuilding methods were not necessarily followed. On the Russian site (thanks, Jim!) there were serious discussions about the origin as well as about the name of the original ship so it is not 100% sure that this is the model of De Crone (other names for this ship were Golden Transport and The Gold Yacht). I also found another model of De Crone, built by the well known Italian modeller Giuseppe Trombolesi. He seems to have built the model using photographs (most likely of Narim's model). I wrote to him a number of times too, inquiring about possible plans but he did not respond either. He must have promised Narim not to forward the photos to anyone else.
However, I managed to contact the late Alexander Dobrenko who was close to Narim and he sent me a few pictures of the model as well as about the plans Narim was working on at the time. So this is the only information I have about the model - as well as a few photos which can be found on the Internet at different locations.
This is the end of the whining session... I will try to reconstruct the plans based on the information I have. So I have to start drawing. I was swearing during the Soleil Royal stern-model project that I am not going to do this - but there seems to be no more information so I have to do this. I just like De Crone too much. It will definitely NOT be an Admiralty model, but plank-on-bulkhead and at a scale of about 1:50 which I like the most. Not sure yet whether there will be masts, yards and rigging, but one thing is sure, there will be no sails. There will be no inside shown either. The carvings will be done by hand (not sure about the material of the 18 gunport wreaths though) and most likely will be gold plated. Again this is something which I promised not to do again but I will have to cover the gunport wreaths if they will be done by putty. And as a preparation for this project, I bought some European Boxwood which turned out to be full of grey rot so the carvings have to be covered too. So most likely the gold leaf will be the solution unless I manage to find some good golden paint.
The attached picture is that of Narim's model.
Janos 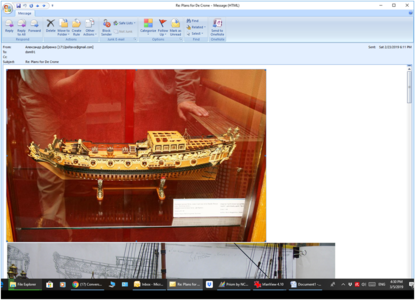