Duyfken (Dutch pronunciation: [ˈdœyfkən]; Little Dove), also spelled Duifken or Duijfken, was a small ship built in the Dutch Republic. She was a fast, lightly armed ship probably intended for shallow water, small valuable cargoes, bringing messages, sending provisions, or privateering. The tonnage of Duyfken has been given as 25-30 lasten (50-60 tons).

In 1606, during a voyage of discovery from Bantam (Banten), Java, captained by Willem Janszoon, she encountered the Australian mainland. Janszoon is credited with the first authenticated European discovery of Australia. In 1608, the ship was damaged beyond repair.

A reproduction of Duyfken was built in Australia and launched in 1999.

When you see this video, we can imagine the daily adventure these old sailors had to pass 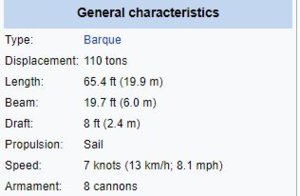 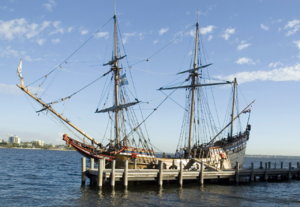 Voyages
In 1596, a ship named Duyfken sailed in the first expedition to Bantam, the crew was captured by the islanders on Pulau Enggano. On 23 April 1601, Duyfken sailed from Texel as the jacht, or scout, under skipper Willem Cornelisz Schouten to the Spice Islands. After reaching Bantam, the "Moluccan Fleet", consisting of five ships including the Duyfken under admiral Wolphert Harmensz, encountered a blockading fleet of Portuguese ships totalling eight galleons and twenty-two galleys. They engaged this fleet in intermittent battle, driving them away on New Year's Day 1602. Thus, the undisputed dominance of the Iberians (Portuguese and Spanish) in the spice trade to Europe was ended.

The fleet received a warm welcome in Bantam, repairs were carried out to damage caused in the battle, and a survey of Jakarta Bay was undertaken, where the Dutch would later build Batavia, their capital in the Indies. Then, sailing by way of Tuban, East Java to the Spice Island of Ternate, cloves were loaded on board and the ship returned to Banda for a cargo of nutmeg. 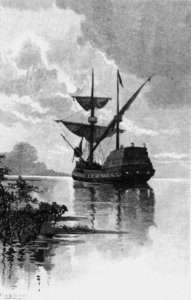 The Duyfken was then sent on a voyage of exploration to the east when the newly formed United Dutch East India Company (VOC) was granted a monopoly on trade to the Spice Islands by the Dutch government. On the voyage home from the Indies the Duyfken was separated from the larger ships in a storm off Cape Agulhas, southern Africa and reached Flushing in April 1603, two months ahead of the larger ships.

On 18 December 1603, the Duyfken, with Willem Janszoon as skipper, set out on a second voyage to the Indies in the VOC fleet of Steven van der Haghen. The VOC fleet captured a Portuguese ship in Mozambique Channel and sailed to the Spice Islands via Goa, Calicut, Pegu and finally reaching Bantam, Java on New Year's Eve 1604.

In 1605, the Duyfken was in the fleet that recaptured the fort of Van Verre at Ambon in the Spice Islands, from the Portuguese. She was then sent to Bantam, Java for urgently needed provisions.

In 1605, the Dutch East India Company (VOC) sent the Duyfken, captained by Willem Janszoon, to search for trade opportunities in the "south and east lands" beyond the furthest reaches of their known world. Willem Janszoon took the ship southeast from Banda to the Kei Islands, then along the south coast of New Guinea, skirting south of the shallow waters around False Cape (Irian Jaya) and then continuing east-southeast. 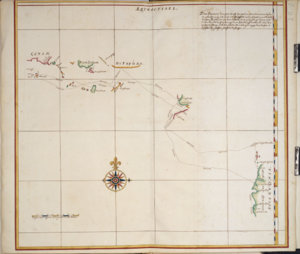 In early 1606, Janszoon encountered and then charted the shores of Australia's Cape York Peninsula. The ship made landfall at the Pennefather River in the Gulf of Carpentaria. This was the first authenticated landing on Australian soil and for the first time all the inhabited continents of the world were known to the European science of geography. Janszoon is thus credited with the first authenticated European discovery of Australia. The ship sailed back to Bantam.

In 1607, the Duyfken may have made a second voyage east to Australia. Later in the year, she was sent to Java to get supplies for the beleaguered Dutch fortress on Ternate. In February or March 1608, the Duyfken was involved in hunting Chinese junks north of Ternate.

In May 1608, the ship was engaged in a five-hour battle with three Spanish galleys. In June, she was sent with larger ships to capture the fortress of Taffaso on Makian Island. A month later, she was brought inside the reef at Ternate for repairs. It seems that she was hauled on her side to repair the bottom but this caused further damage, and the ship was condemned as beyond repair. 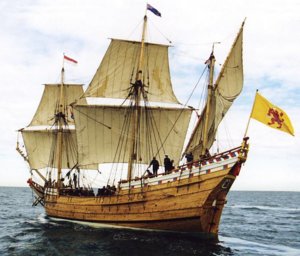 The Duyfken Replica Project founder was Dutch-born Australian historian Michael John Young[6] who became aware of Duyfken as early as 1976 and lobbied extensively for a new replica project after the launch of the Endeavour replica in Fremantle, Australia in the mid-1990s.

The Duyfken Replica committee was established in 1995 with Michael Young and Dr. Kees de Heer and late journalist James Henderson. This led to the establishment of the 'Friends of the Duyfken' group then ultimately with John Longley's support, the 'Duyfken 1606 Replica Foundation'. The Foundation was initially chaired by entrepreneur Michael G. Kailis of Perth, who led the charge in raising the $3.5 million building budget. 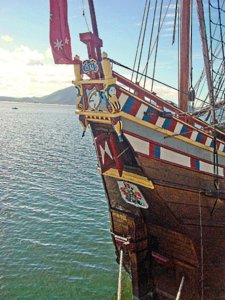 Decorated stern of the Duyfken replica in Cooktown harbour in 2009

A full size reproduction of the Duyfken was built by the "Duyfken 1606 Replica Foundation" jointly with the Maritime Museum of Western Australia and launched on 24 January 1999 in Fremantle. She then undertook goodwill tours to Sydney, Queensland, Indonesia, Sri Lanka, Mauritius, South Africa, and finally Texel in the Netherlands. While in the Netherlands, the floor of the hold was replaced by antique Dutch bricks.

For a period in 2005, the Duyfken was berthed alongside the Old Swan Brewery on the Swan River in Perth, Western Australia. The replica was open for visits by the public.

In 2006, Western Australia played a big role in the 400th anniversary of the original Duyfken's visit to Australia and a national group, Australia on the Map: 1606–2006, was formed to commemorate the arrival of the Duyfken and to mark this important milestone in Australia's history, by also giving recognition to all who followed her and contributed to the mapping of the Australian coast.