This will start a log of a my scratch build of a generic oyster sharpie from the late 19th century. The plans come from the NRG and were conceived and produced by Bill Strachan and Al Saubermann. The scale is 1/16, or 3/4" = 1'. From the NRG website:

"The Sharpie originated in the mid-19th century in the vicinity of New Haven, Connecticut. The design quickly gained popularity, and by the 1880s, sharpies could be found in Florida and the Great Lakes. Sharpies were working boats with hard chines, flat bottoms, shallow drafts, and a centreboard. Their ease of construction, small size, low draft, and low, straight sides made sharpies perfect for harvesting oysters in shallow, tidal waters.

Sharpies varied greatly in length and rig, including Howard Chapelle’s elegant 14' Sharpie design to large boats in the 30-35' range two masts and 2-3 crew. The design is still popular as both a recreational and a working craft, with local variants found worldwide. As a result, the sharpie offers the modeler a wide range of options for detailing, paint schemes, sailing rigs, and weathering." 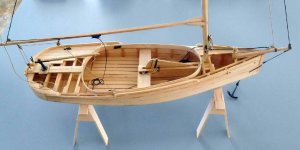 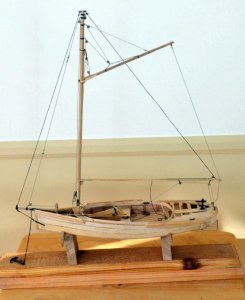 I purchased the plans, and cut out the building board base out of 3/4" maple plywood. It is purposely oversized. Picture in the photo is construction template A1 which will be glued to the plywood base. There is a blank for building jig 1 (BJ1) which will be ripped to 1-1/2" wide.


I've not decided as to whether i'll mill my own boxwood for the project or ask Crown to do it. I've got a lot of things going on, so hiring it out may be best. Here we go! 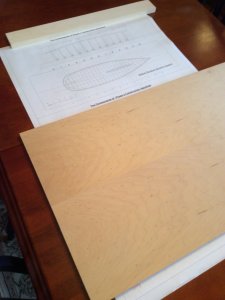 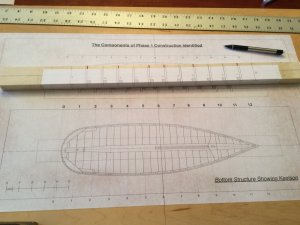 After removing the rip fence from my Byrnes saw, I set the carbide ripping blade to 1/4". I then cut 11 notches wide enough to fit a thickness of 1/8" aircraft plywood. Using the template on the plans, I carefully screwed Building Jig 1 to the main build board. Next comes shaping the station templates. These are 1/8" plywood bulkheads that fit in the grooves on the jig and have cutouts for the chines and keelson. The bottom of the boat is then planked in this " up side down" position. 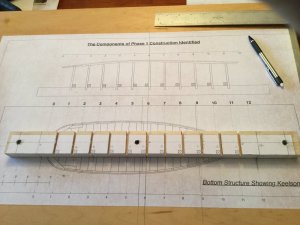 The eleven station templates were rubber cemented to 1/8" plywood blanks. They'll be cut out and beveled according to the plans using the Byrnes saw, the scroll saw and the Byrnes sander. This is the most critical part of the build, so I plan to take my time! 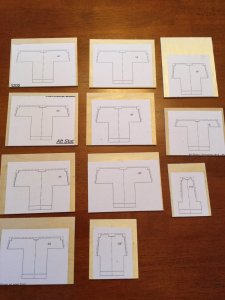 All the station templates were cut out, and the lines trued up with the Byrnes sander. The chine notches and sides of the templates were beveled according to the plans. The practicum explain how to bevel off the drawings themselves, but the plans list with bevel angles of each station template calculated by CAD. I went with the CAD bevels!. The next step is to temporarily set the templates in the jig and fine tune the notches so the side planking, chines and keelson fit properly. 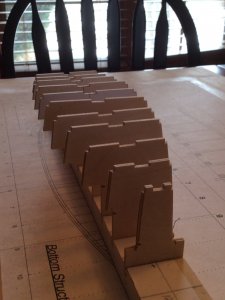 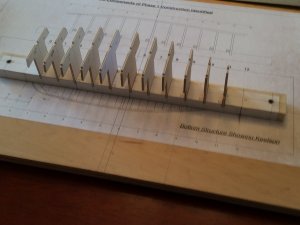 A very interesting boat. And a very interesting start of your building log.
I am looking forward to see how the jig is working.....I will follow your log with big interest.
Thanks for sharing.......

Wow Dave!!! I don't know how you juggle all these projects!! Very impressive.

Mike: I have a short attention span!!!! The biggest problem is that they're starting to take over the house. I'm on my best behavior with the admiral

I've always liked these shoal draft flat bottomed sloops, and the gaff rig is perfect. I actually built one a few years ago and we still sail her.

Here's a link to some photos of the boat, and photos of us sailing her.

It's necessary to build the second jig (BJ2) before anything is added to the first. This jig forms a "press" to establish the curve of the keelson, which, together with the chines receive the bottom planking on the first jig. The structure is then transferred to BJ2 to complete the hull framing. The photo shows the component parts. To get congruent parts, the two and three layer pine parts are ganged together with doublesided carpet tape for cutout on the bandsaw and smoothing to the layout line on the oscillating spindle sander. 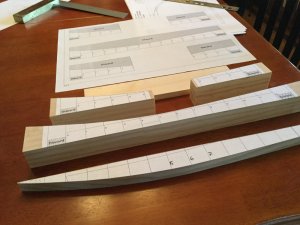 Dave , how did you glue the paper on the wood?any special glue what comes of easily?

I use Elmer's rubber cement. Coat both the wood and the paper for the best bond. The best part is the paper comes off easily: just lift a corner with your fingernail and peel it off. There is a rubbery residue left on the wood after the paper is removed but it rubs off with your fingers. To be sure it's gone, wipe with acetone or mineral spirits. 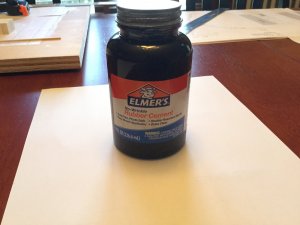 A similar glue I use in scratch building, for fixing temporary the part of the plan of f.e. a futtocks on the board. After finalization of the complete frame you can peel the paper off......

G'day Dave
I'm going to watch this build with both my eyes open. I have learnt some interesting things so far.
I have to learn CAD. It appears that using this type of programme you can easily add extra bulkheads with ease and also do bevelling.

Is that true?​
I was a graphic artist in my Hay-Day, and before the computer influenced, I used rubber cement all the time.
I forgot about it! You are correct about the advantages of this 'gooe' as we called it.
In the morning I'm going to buy some straight away and redo some work for my RC build.
Thanks a million mate.
Greg

No problem, Greg!
The rubber cement holds well, even for small parts cut out on a scroll saw. It's what I use to cut out futtocks from a billet of wood when making frames.

The parts for the second jig (BJ2) were trimmed to length and the notches wher the parts rest on the base plates were formed using the dado set on my table saw. The two shorter blocks are actually 3 parts ganged together using carpet tape. The long part is two separate parts joined by tape. The glue up will leave a slot for the centerboard. Next: gluing up the jig. 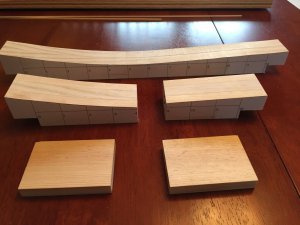 G'day Dave
Your last post the pic didn't show. Could you fix it if you can?
Thanks mate
Greg

I could see it fine, Greg, but I did reload it. Any better?