Hey Guys a Model Company I used to do design work for asked me to draw up plans for a Higgins Boat. and sent along some factory drawings for it.

They want it at 1/6th scale as there are a lot of model military reinactors that do a lot of 1/6th scale R/C plane and tank reinacting and so wanted landing craft for their jeeps.

I will be drawing this up in Solidworks following the factory drawings and then I will be building one at 6th scale for R/C to verify Proof of Concept. so this should be a good build. 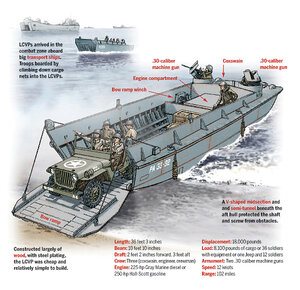 That sounds like an awesome idea. I look forward to it.

at one time I did a Fletch Class Destroyer Hull for them I have the complete set of Bath Shipyard drawings for the ship The cool thing with Solidworks is that you can use the Tables of Offsets to generate the curves. Wished these tall ships had them 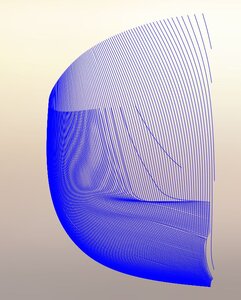 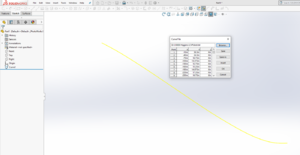 Hello Joe,
I am not to savvy when it comes to computers and am really impressed with what people can do with it. I however, can look at drawings and can get a lot of information from them. The drawing on your fifth post seems that the stations are actually wood frames.

Please correct me if I'm wrong, but weren't these vessels constructed with wooden frames and then covered over with metal such as steel and/or aluminum?

Also, looking at the dimensions of 27 frame stations at 15" it seems that this vessel was approximately 33'-9" long. It seems that it would make for a nice static model at 1:24 scale which would be about 16" long. Anyway, its food for thought.

ziled68 said:
Hello Joe,
I am not to savvy when it comes to computers and am really impressed with what people can do with it. I however, can look at drawings and can get a lot of information from them. The drawing on your fifth post seems that the stations are actually wood frames.

Please correct me if I'm wrong, but weren't these vessels constructed with wooden frames and then covered over with metal such as steel and/or aluminum?

Also, looking at the dimensions of 27 frame stations at 15" it seems that this vessel was approximately 33'-9" long. It seems that it would make for a nice static model at 1:24 scale which would be about 16" long. Anyway, its food for thought.

At just over 36 ft (11 m) long and just under 11 ft (3.4 m) wide, the LCVP was not a large craft. Powered by a 225-horsepower Diesel engine at 12 knots, it would sway in choppy seas, causing seasickness. Since its sides and rear were made of plywood, it offered limited protection from enemy fire but also reduced cost and saved steel. The Higgins boat could hold either a 36-man platoon, a jeep and a 12-man squad, or 8,000 lb (3.6 t) of cargo. Its shallow draft (3 feet aft and 2 feet, 2 inches forward) enabled it to run up onto the shoreline, and a semi-tunnel built into its hull protected the propeller from sand and other debris. The steel ramp at the front could be lowered quickly. It was possible for the Higgins boat to swiftly disembark men and supplies, reverse itself off the beach, and head back out to the supply ship for another load within three to four minutes.

Armor was a problem, but also other problems found later were that the boat could not go through shallow water and reefs. Other vehicles were created to meet those drawbacks in amphibious operations.

The Higgins boat was built in New Orleans

so basically the only metal was in front to help protect as coming in but watch all the D-Day movies or Saving Private Ryan and youll see most the men bought it coming in on the first couple waves until they could pin enemy fire down. they were really death traps for landings but great for extraction and resupply.

Ok so I have the stations marked out the keel curve, Buttock-01, Buttock-02 curves used the TOO for the curves I still have the chine and the 2 Sheer Curves to create tables for and bring in 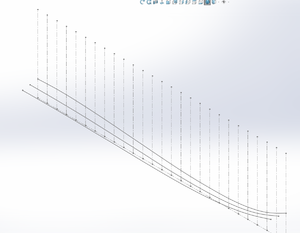 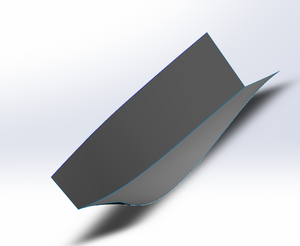 So Lets back up a little. Some people may not know what a Table of Offsets looks like or what it means so Ill try to simplify it

so in the order to loft out a curve you need several points. and in 3D they will need 3 values and X, a Y, and a Z value

think sort of graphing in school but you need a 3rd dimension.

in the chart above we are making lines front to rear and all except the chine, so the info for 2 of the reference points are in the chart. the one we are missing is the side to side for that we need to look at the plans and get the keel half width and the location of the 2 Buttocks and add them to our table.

the other thing on modern ships is they usually dont tell the distance between stations unlike this one. in Modern ship building the length of the ship is divided by the number of stations to get the distance as all stations are equally spaced apart

Oh another thing you will sometimes see a + or - next to the 8ths Dimensions. You see these towards the end of the chine. what those mean the technical term for it is fudge of an inch

so a 8th of an inch marked 5+ means 5/8ths plus a fudge, in order to figure out a fudge we just use half an 8th or 1/16th an inch. this is catually what the shipbuilders call this dimension a fudge

An interesting boat for more modern Navy collectors. Would make a nice piece to add to a large scale collections.

What I would love to see is a large scale DVWK the smaller size, as I think they had two sizes.

Post WWII my dad was assigned to Germany in 47-48 and owned a small Duck available to GIs as they were surplus from war. My mom has told stories about him coming to pick her up on date in his Duck.

Yes, big fuss when one large tourist Duck sunk with soles on board in the Ozarks a few years ago.

They went out in choppy waters overloaded and had a cover over the top of duck to keep sun off pax. Cover trapped most passengers inside when it sunk after swamping.

yea happened just a little after we moved back to illinois from the area. used to live in mountain home arkansas area 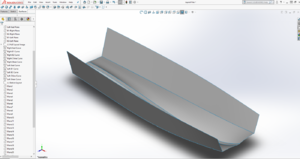 ok now I have the Stations made from intersecting the planes with the lofts. 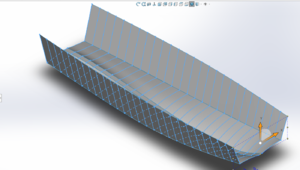