This was one of my first models, completed around 2007. My intent was to depict the crowded conditions on the Bounty’s launch. I used the launch plans and lines found in the Bounty volume of the “Anatomy of the Ship” series, hand carved two halves of the hull from basswood (I was a pretty unskilled modeler at this point but was a decent carver), and glued them together onto the midline stem, keel, and sternpost pieces. Ribs, stringers, gunwales, thwarts, masts, and sails were added to the assembled hull. The nineteen figures were made from polymer clay, sculpted to shape, individually fit to a specific spot on the launch, and baked to harden. As I made the figures one by one, it became harder and harder to find spots for them in the increasingly crowded boat, which made my point, I guess. The poses and activities of the crew figures were based on descriptions found in Bligh’s journal of the 3600-mile open boat voyage.

Much to my surprise and wonder, images of this model have been requested for, and included in, two books about Bligh and the Bounty mutiny, and most recently images were included as part of a major exhibition about Bligh at the National Maritime Museum in Falmouth, Cornwall, England.

The dimensions of the completed model with its extended oars cried out for a non-traditional case, and I chose a polystyrene dome placed on a rotating, “lazy Susan” base. The model can be rotated for viewing from any angle. One of the photos below shows the model on its custom-built shelf in our den at home. The space below the shelf holds the books in which images of the model can be found and several other books about Bligh and the mutiny. 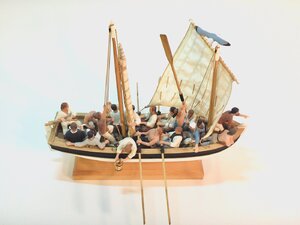 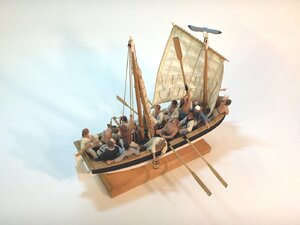 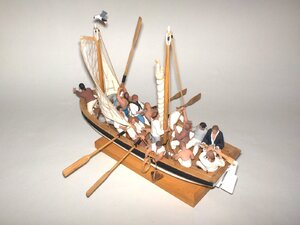 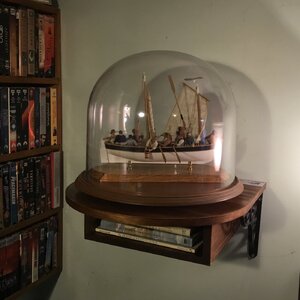 In addition to the model (wow!) what a lovely way to display it, with a place to put the books that give more depth to the model.

This is a true work of art. It expresses the situation so well, better than any book description or sketch I have seen! I love the added touch of a sailor trying to knock a seabird down to eat! That was a key source of food (well, any source of food was key to their survival).
J

This is amazing piece of work, and you are right, it really depicts the crowded condition on Bounty launch. The whole composition is beautiful and custom hand made sailors figures are awesome.
It's hard even to imagine how captain Bligh and his crew managed to sail across the ocean a few thousands miles until touching the friendly harbor.
With your permission I would like to share your pics