Hello David, just catching up on your build log, and its really looking very impressive.

More rainy weather, more days indoors ship building.
The upper deck is now complete, more guns more gun tackle. I assembled all the tackle before installing the guns. Having done the tackle with the guns in place on a previous project (with far fewer guns!) I decided there had to be a better way so a bit of artistic license resulted in some of the tackle being represented by thin timber strips where it is tucked away below decks or gangways but where more visible, such as the the train tackle, I have made up blocks from 2x2 mm walnut and ring bolts from 0.5mm brass wire finished with chemical blackening.
More work has been done on the detail hull decoration. Again a bit of artistic license has been applied and an "impressionist" approach has resulted in details which are pretty rough when viewed up close but I think create a reasonable look when seen in the overall. 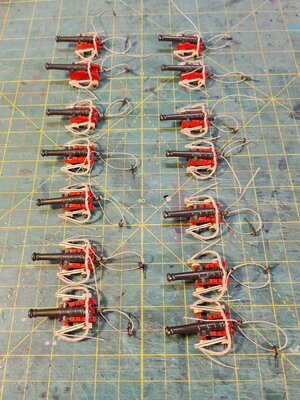 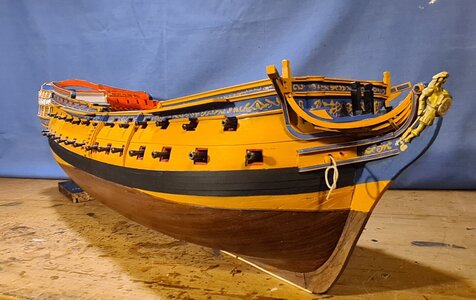 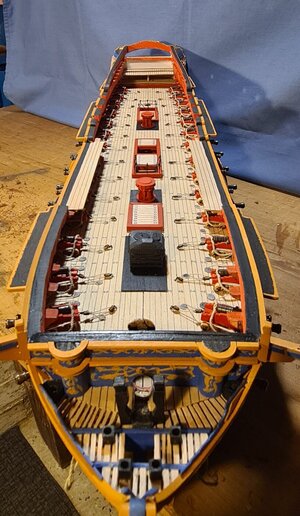 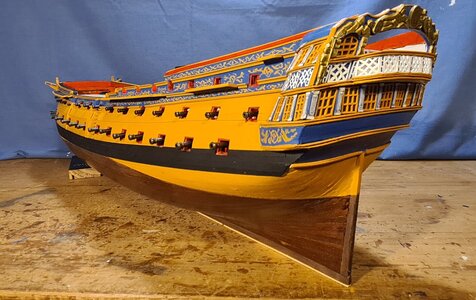 Hi, My Bellona build is progressing to the point where I am assembling deck fittings related to the rig.
The standing rig looks relatively straightforward despite the massive number of shrouds and chains.
The running rig presents some difficulties.
I was able to substantially complete the running rig for my previous build, HMS Surprise, as I have Lennarth Petersson's excellent book "RIGGING PERIOD SHIP MODELS" which is based on a ship quite similar to Surprise. So rope layout and most importantly the belaying patterns at deck level was well described.
The running rig for Bellona is basically a scaled up version of Surprise but the similarity ends when the ropes hit deck level. Surprise has extensive belaying pin racks attached to the bulwarks, Bellona does not, so where these ropes terminate is a bit of a mystery. At the forecastle the bowsprit and foremast lines seem to terminate at the many timberheads that surround it. Others terminate at the forecastle rail. I am unable to work out which lines terminate where. The desination at deck level of the main and mizzen ropes is a complete mystery to me.
Any advice that the SOS collective mind can provide would be greatly appreciated.
Thanks and cheers, David.

I do not have the details of the Anatomy book about the Bellona in mind, but did Lavery not explain the belaying points detailed enough?
Based on the first post of this topic we know, that you have the book by hand....

Book Review: The 74-Gun Ship BELLONA - (Anatomy of the Ship) by Brian Lavery My copy is the original version published by Conway Maritime Press in 1985, the revised version has an additional 1:96 scale fould out plan in the book cover Hardcover: 120 pages Publisher: Conway Maritime...
shipsofscale.com

Uwek said:
I do not have the details of the Anatomy book about the Bellona in mind, but did Lavery not explain the belaying points detailed enough?
Based on the first post of this topic we know, that you have the book by hand....

Book Review: The 74-Gun Ship BELLONA - (Anatomy of the Ship) by Brian Lavery My copy is the original version published by Conway Maritime Press in 1985, the revised version has an additional 1:96 scale fould out plan in the book cover Hardcover: 120 pages Publisher: Conway Maritime...
shipsofscale.com

The Lavery Anatomy book includes quite a detailed layout of the running rig at the spars and masts and has lots of arrows on lines pointing towards the deck but does not have what happens when they reach deck level. I can make an educated guess as to which ropes run through sheave blocks and terminate at the pin racks at the base of the masts but this only covers the heavier ropes.
I know that kits of 74s exist. Could possibly the kit instructions that include a belaying plan be scanned or photographed and included in a message.
Again, any information that can be provided would be greatly appreciated.
Cheers, David.

I've sent you pm.
Maybe some lines end at shroud cleats.La Bretagne french vessel has such endings. At the same time there's other very similiar ship L'Ocean which has pin rack 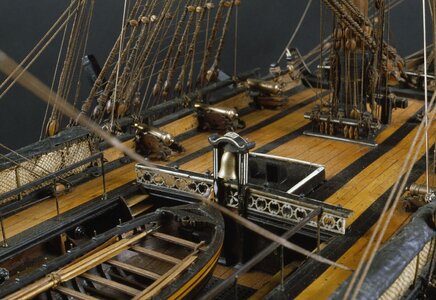 Thanks for the replies.
I am gradually getting an idea of where various ropes terminate at deck level.
Possible pin racks towards the bow end of the quarterdeck could be a bit of a problem due to gun locations and the height of the bulwarks. The termination of many of these ropes on shroud cleats as shown on the great photos of the model solve this and this is probably what I will do.
Cheers, David

Update time.
All decks are now permanently fixed in place and the deck fittings are progressing. The bellfry was a good little challenge. The long guns on the forecastle and the carronades on the poop deck will be installed once the shrouds are in place so there is no positions clash. Setting out the gun ports on the lower decks had to be carefully considered with the lower sections of the masts in place and dummy shrouds run.
The rudder has been fabricated and installed along with more of the stern detailing.
The poop deck skylight was again glazed using the PVA method.
Picking up the hull and turning it to work on opposite sides was becoming a real problem so an essential addition to equipment is a "lazy susan" style stand with a swivel fitting from the local hardware store. The plywood base can be chocked and the turntable locked to enable work on hard to reach bits on the hull.
It's almost time to start on masting and spars.
Cheers, David. 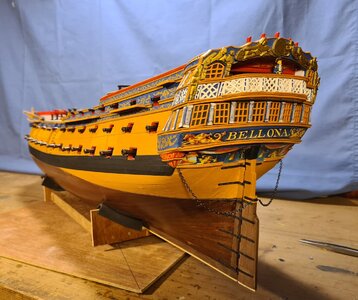 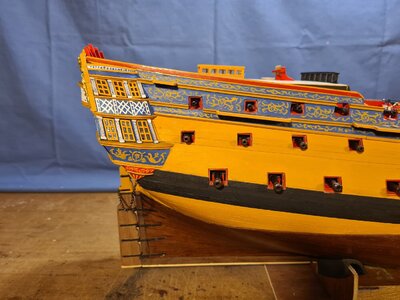 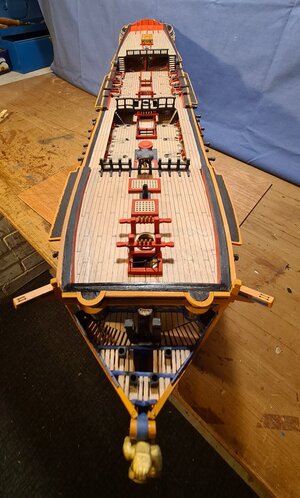 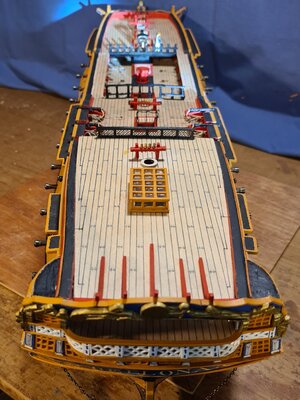 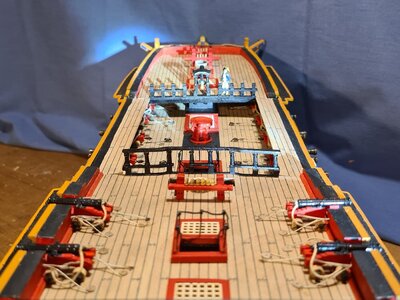 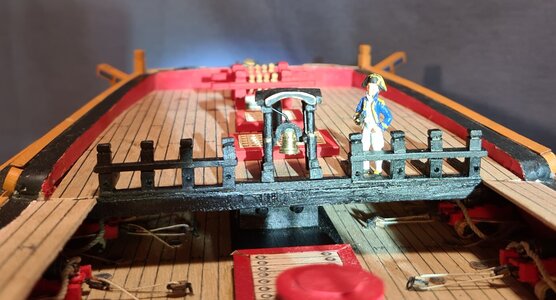 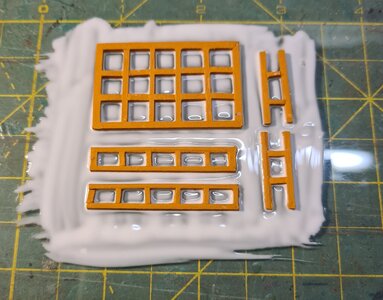 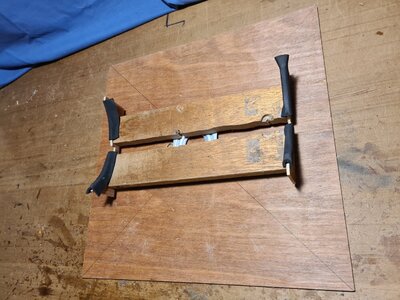 I have reached a milestone. The mast components have been made and for the first time I can see the full size of the model. It's pretty big at about 1,050mm long and about 900mm high. When the yards are fitted, the widest being the main yard the model will be about 400mm wide. That's going to be one BIG perpex box! 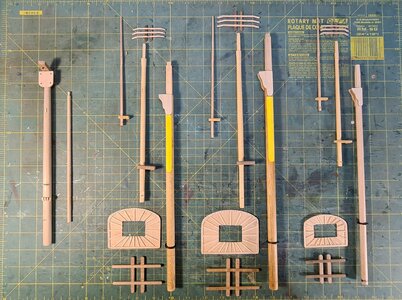 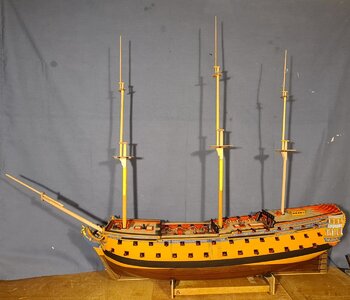 Update time for my Bellona build.
Work on the hull is nearing completion and the start of the rig is getting closer.
The chains have been made using 20 gauge brass wire and the deadeyes fitted. The chain sections are shaped using a block of hardwood as a mandrel with pieces of wire of different thickness and at different spacings to make the shapes. Once made up the chains are then disassembled and treated with a chemical blacking agent. Then reassembled.
I believe that getting the chain angles right is really important so I spend quite a lot of time with the masts in place and dummy shrouds to mark out the angles. there is also quite a bit of pre-planning needed to ensure that there is no conflict with the shrouds and the gun port positions so very early on in the hull construction I marked out the chain positions. 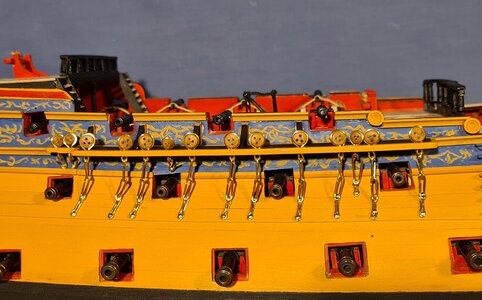 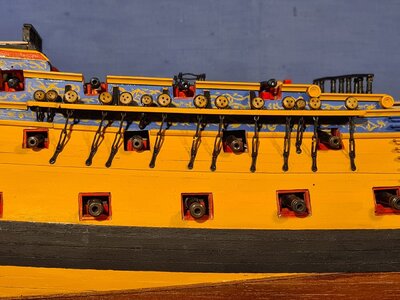 Very good result
How did you make the blackaning of the brass material after the installation on the hull?

Hi, the brass fittings were all made up and fixed in position to make sure it all fitted together then dismantled, blackened and then reassembled. A time consuming process but it worked.
Cheers

Navis Factorem said:
Hi, the brass fittings were all made up and fixed in position to make sure it all fitted together then dismantled, blackened and then reassembled. A time consuming process but it worked.
Cheers
Click to expand...

OK - clear and many thanks for the fast answer