Recently bought this old book about the HMS Captain disaster in 1870. I have always been fascinated by this transitional iron and steam/sail warship touted as the most advanced warship at the time. A consequence of populist politics pushed by a talented and persuasive charismatic amateur inventor versus bureaucrats with tried and tested sound ship building practices of the time which could only lead to disaster. Captain Cowper Coles the inventor of the Coles Gun Turret believed he could build a better turret ship than the British Navy and used his powers of persuasion, the media, political clout and interference to have the Captain built. The Admiralty were aghast but powerless to stop him having his way and being forced to accept this ship for the fleet.

So the Captain was built in a private shipyard with funds raised by public subscription with minimal input and supervision from the Admiralty. The design was fatally flawed, construction poorly supervised, was overweight, top heavy and had dangerously low freeboard for an ocean going sailing ship with a maximum righting angle of only 23 degrees. As well it had an enormous hurricane deck that acted like an extra sail when the ship heeled in front of the wind. It was over sailed with the most canvas ever rigged on a warship. No stability tests were conducted before joining the fleet. It sailed smoothly in fine weather but the Captain capsized and sank on its first meeting with a moderate force 6 gale several months after completion. Over 480 crew perished including Cowper Coles with only 18 survivors.

This book focuses more on the politics around the building of the ship, the war of words and bitter divisions between Coles and his strident critic Edward Reed the Admiralty‘s chief constructor and the subsequent soul searching to court martial trial makes an excellent read. It would have been better to have more of the testimony of the survivors and details on the ships construction included. But there is little else available on this tragedy, one of Englands worst peacetime naval disasters. 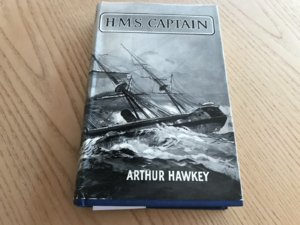 That would make an interesting model.
A

Brian077 said:
That would make an interesting model.
Click to expand...

Yes , it’s unusual but clean and streamlined lines plus tripod masts and turrets would make it stand out. A good project for a scratch build also.

Take a look at this:

Today in Naval History - Naval / Maritime Events in History 6 September 1842 – Launch of HMS Superb, a 80 gun Vanguard-class Ship of the Line HMS Superb was a two-deck 80-gun second rate ship of the line of the Royal Navy, launched on 6 September 1842 at Pembroke Dockyard. H.M.S Superb, (80...
shipsofscale.com

1870 - HMS Captain capsized with the loss of nearly 500 lives because of design and construction errors that led to inadequate stability.

HMS Captain was an unsuccessful warship built for the Royal Navy due to public pressure. She was a masted turret ship, designed and built by a private contractor against the wishes of the Controller's department. The Captain was completed in April 1870 and capsized in September 1870 with the loss of nearly 500 lives because of design and construction errors that led to inadequate stability.

Sometime back I read a testimony from one of the sailors who survived. He said he had just finished his watch and was disturbed to the severity of the Captain‘s condition during the storm that he took it upon himself to cut the lashings securing the ships launch and climbed inside under the tarpaulin. When the Captain capsized the launch was hurled into the sea. He managed to help the other survivors to get on board. Without his actions there would have been no survivors. He said he knew he would likely get into serious trouble for his actions if the ship did not sink but thought the risk was worth taking. Along with the rest of the survivoirs he was exonerated.
Last edited: Apr 7, 2020