I was thinking about builders saying they had limited space to display a model and limited room for more than one or two.

my first thought is wow that is small but then again model railroad people can achieve remarkable results at HO scale.

if I took a ship like the schooner Chaleur at HO scale is about 7 1/2 inches and cut all the frames parts deck etc. it is impressive to build at a small scale and the ship model is small enough it can be set in any diorama. HO scale offers many pieces and parts, little people, buildings, machines etc.

Pretty much every model train person has spent a lot of time considering the scale question. Coming from that world, here’s my thoughts on working at small scales. My train is N Scale which is 1:160 scale. The joke amongst N scale guys is that HO stands for Horribly Oversized.

A big part of building a realistic looking n scale layout is learning how to create a feel or an impression. Kind of tricking the viewer into filling in the picture with their own mind. An example of that is putting a couple plastic blocks and little plastic people in this bar.

It’s so small you can’t really see what is inside from a few feet away, but your mind notices there’s something in there and says wow there’s even interiors in the buildings.

That was my philosophy on rigging these 1:96 canon with wire like I did below. I could have spent ten times as long rigging in oversized blocks that would look at least as bad up close as this does, just to create the same basic feel of the canons being rigged. 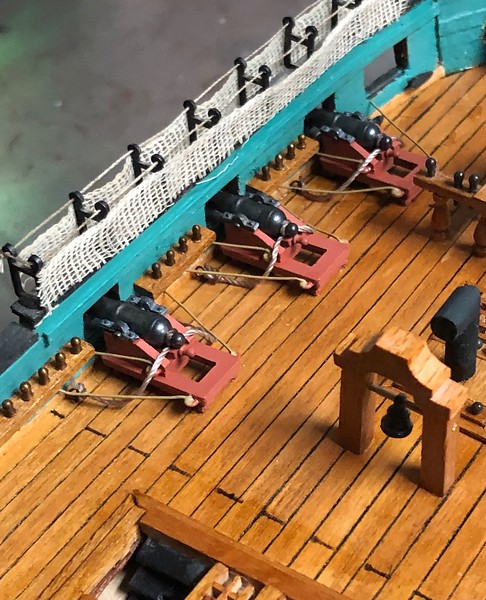 Then there’s managing expectations. If a person feels that it’s very important for, all of the knots be right, lines served correctly, proper eyebolts etc. Working at 1:87 would probably be pretty frustrating. The point being, what in the train community is usually called the 3 foot rule. Most people looking at a train layout are at least 3 feet from what they’re looking at so even if it looks like total crap in a macro photo, if it looks good from 3 feet away your good. I shoot for 2 feet that way, that way there’s a little buffer. A lot of the things that would be exceptionally hard to do at the smaller scale probably don’t need to be done.

I have two other thoughts that are kind of tied together about working at smaller scales. The first is that you can’t scale the grain in the wood. So wood selection will become more important, and if a person really likes bare wood it might be hard to get a realistic look.

That ties to the other point which is something You have talked about elsewhere, and that is opening up your mind about using other materials. Here’s a web site that shows how to make a sheet of styrene look like wood.

There is a limit to how small we can make a piece of wood before it becomes unworkable. The white lines above and below the hawse holes on my 1:96 Constitution are .01 X .03” (0.25mmx0.75mm) plastic strip. I don’t think I could have done that with wood and my painting isn’t all that great. You can also see a better look as to how the canons look when viewed normally instead of in macro.

Would be interesting to do a 1:87ish build with a couple people and see what shortcuts we can figure out to produce a good look without pulling all our hair out.

At this shop you can buy HO scale wood strips

I think model ship building got stuck in a type cast. That is models should be built a certain way out of a small selected type of wood, they should be displayed a certain way and the ship modeling community insisted there should never ever be little people on classic ship models. Another poo was never ever should plastic be used on a wooden ship model.

The model railroad community really has one up on us when it comes to modeling and we can learn a lot from that community.
HO scale can produce stand along ship models as well as ship in a diorama setting where the mode builder can really expand their modeling skills.
a HO scale laser cut model of a schooner can be done very inexpensively because it is small enough a lot of parts can be put on one sheet of wood.

this is all HO scale done by Harold Hahn 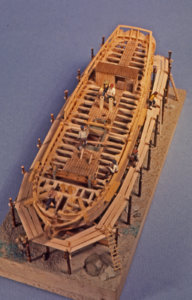 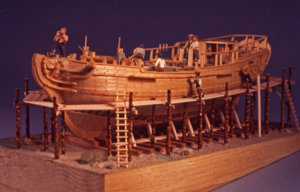 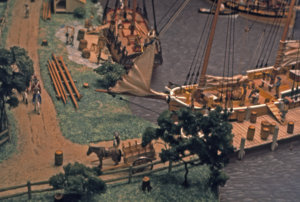 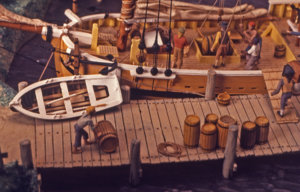 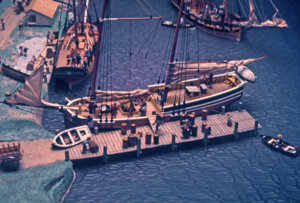 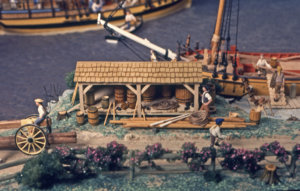 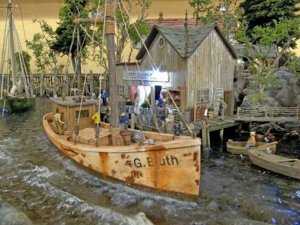 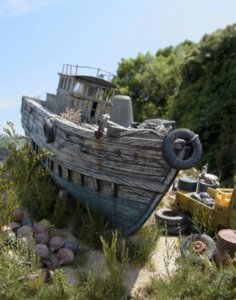 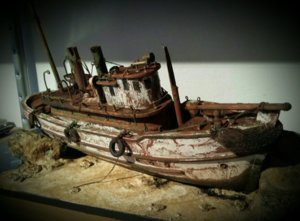 from the Hahn collection there are models with no carvings like the Druid that can be done at a small scale.

DAVE, ONE THING THERE ARE SOME OF US WHO DUE TO AGE AND ITS EFFECT HAVE DIMINSHING EYESIGHT IT HIT HOME TODAY AFTER TRYING TO RIG GUNS I KNOW WHAT TO DO BUT THE EYESIGHT FOR THE SMALL ITEMS IS JUST TO MUCH, and I HAVE TO GIVE IN TO THE INENTIBLE, RIGHT NOW I HAVE A PROBLEM EVEN READING CLOSED CAPTIONING ON MY T.V, JUST MY 2 CENTS. Don

I agree Don small HO scale is not for everyone but that is no reason to not go forward with it. Model railroading is a huge hobby and HO scale is very big in that hobby.
Maritime subjects at HO scale can link to 2 hobbies

Dave Stevens (Lumberyard) said:
I agree Don small HO scale is not for everyone but that is no reason to not go forward with it. Model railroading is a huge hobby and HO scale is very big in that hobby.
Maritime subjects at HO scale can link to 2 hobbies
Click to expand...

I personally would not fiddle with such small parts,the reason I am building the Ontario at 1:32 scale
D

maybe one day DAVE, I can see it has its place, I REALLY ADMIRE THOSE WHO CAN DO IT. Don
N

Now your talking my scale I have scratchbuilt two fishing boats, the first the Sherry K. after my wife, and the second, a little more ambitious after an island I went to in the Mediterranean, the Korcula. I was vacationing in Yugoslavia at the time. The steamer, the C.R. Lamb, started out as a kit, but I did a lot of scratch building on this too, replacing the railings, building my own lifeboats, and several other details. I have no layout for these, but plan to do a wharf diorama one day. 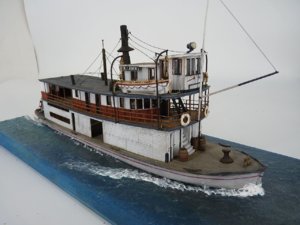 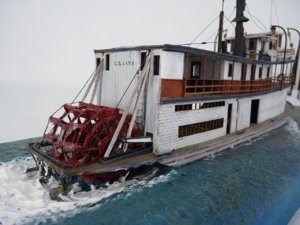 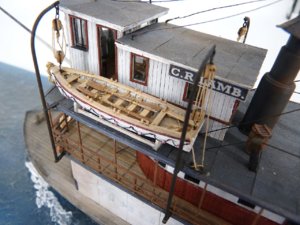 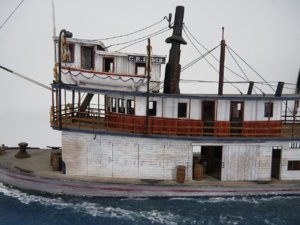 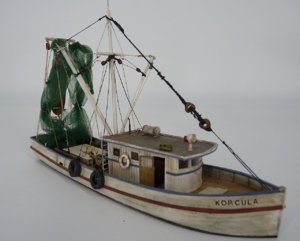 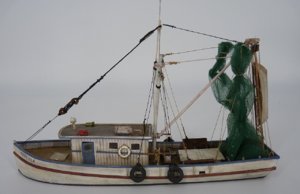 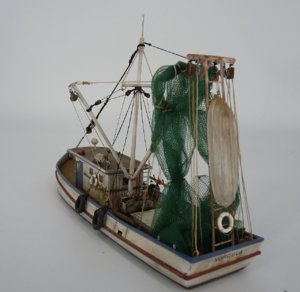 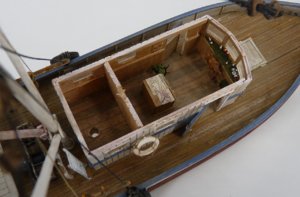 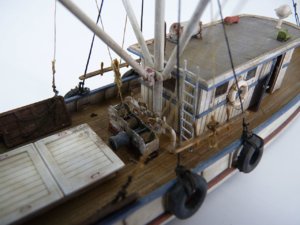 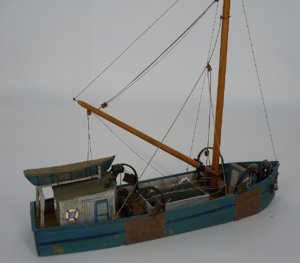 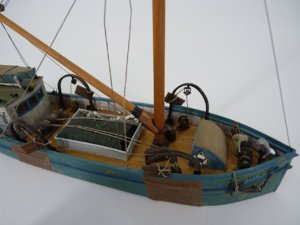 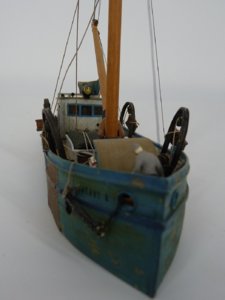 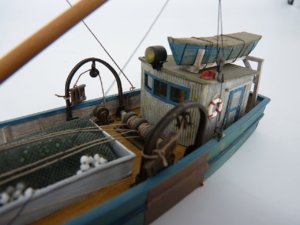 Thank you Jim, and I always forget to include my name, my bad. I don't mind Nelson, he has been someone in history I enjoy reading about, although not enough of, and that name is used by others on other sites.
I noticed too, the ropes have loosened up over time, since I built the Sherry K. They were a lot tighter. I need to fix that somehow.

So, now I will close with my real name.

what caught my eye is the realism of the models. I just love the appearance of the models.
Many builders built to clean the wood is sanded and polished to a ultra smoother finish and everything is perfect. That's fine and it is one style of building.
When you can photograph a model and wonder if it is real thing or not, to me that is the ultimate modeling skill.
N

Dave Stevens (Lumberyard) said:
this might even create a connection between model railroad and model ships
hundreds if not thousands of products are produced for HO modeling and we have the know how to create HO scale ships in finer detail timber for timber

I absolutely love these three boats. The rust, decay and neglect are hard to duplicate, and something I will want to try one day. It's getting my juices flowing already, and since I do mostly dioramas, I can fit this in for a scene all it's own, as appears these are. I went to a 'bone yard' on vacation once, forgot where, to be honest, and took a lot of pictures, if I can remember where I kept them. One boat in particular there was in a similar state, and apparently under repair. going by the amount of scaffolding around it.

I went to a 'bone yard' on vacation once, forgot where, to be honest, and took a lot of pictures, if I can remember where I kept them.

Dave Stevens (Lumberyard) said:
I went to a 'bone yard' on vacation once, forgot where, to be honest, and took a lot of pictures, if I can remember where I kept them.

that would be fantastic if you found the photos and posted them
Click to expand...

Give me a while, I will look for them.

Great models and photos of them, makes me want to build a model of shipwrights at work or a model of a cable works. So many models, so little time. I would be up for modeling in HO. I have a plan to build a model railroad layout complete with a lake. Just need to come up with what kind of boat/ship to model that would fit my modern era layout. Maybe it could be part of a maritime museum or a tourist attraction. Just thinking.

I have always wondered about the lack of ship models for the model RR community. Most of the ones you do see on layouts are scratch builds, which is probably why you see so few harbour side builds. Not everyone has the patience to build ships - although not everyone has the patience to build a fully fleshed out model RR scene either. I, for one, think it's a great idea to develope a couple of kits to see what the response would be from the model RR community and suppliers.
You must log in or register to reply here.
Share:
Facebook Twitter Reddit Pinterest Tumblr Email Share Link
Top