Completed this morning. It took 84 hours (Timed on a stopwatch) Spread over 53 days.
Bob 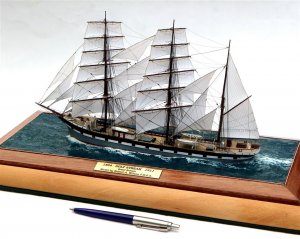 Very nice. I enjoyed following your build. Is there a next project??
S

The iron barque has been severely damaged on its way to Belgium. Probably a write-off. Perhaps higher powers are indicating to me that it is time to pack it all in!
Bob

shipbuilder said:
The iron barque has been severely damaged on its way to Belgium. Probably a write-off. Perhaps higher powers are indicating to me that it is time to pack it all in!
Bob
Click to expand...

I am collecting the damaged model from the courier this morning.
Bob

G'day Bob
I'm very sorry to hear that it was damaged. What a huge pitty not only for you, but for the general public as well. It would be bad enough to have it damage on it's way home, but at least the public would have seen it.
Allthebest mate
Greg

Thanks Greg,
I don't think the public would ever have seen it. It was sold to a private collector in Belgium. As soon as he told me it was damaged, I refunded him in full, and it was collected by the courier to return to me. I will probably re-rig it, and regardless of whether I do or not, I will not try and sell it again, but keep it to mark the end of my sending them out by courier. Anything I build from now on will be collection only, that will of course reduce my output very much, as they went all over the world. When I did exhibit them in public, they rarely got more than a casual glance, so nowadays, the only people who see them are the buyers. I stopped taking them to the local ship model society some time ago, as hardly anyone showed the slightest interest in them. It is only collectors who really like them, as they want something different, that none of their fellow collectors have. I am quite looking forward to my new-found freedom from the worry of sending them all over the world. I may display completed models on the internet from time to time, but build logs are now finished. I will soon be re-structuring my website in line with my future plans. I will also be moving more into writing about how to build merchant ship models, and the life and adventures that were to be had aboard merchant ships. My writing has been a resounding success for some time now, and my next book is already in the pipline. I will display the images of the damaged Gulf Stream here as soon as I have collected it, later today.
Best wishes
Bob
S

Here it is. Bob 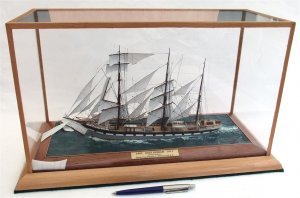 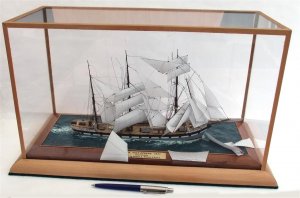 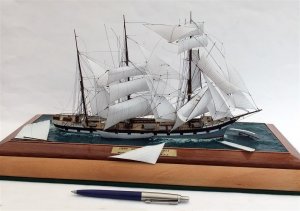 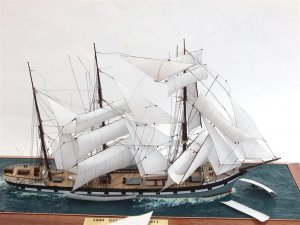 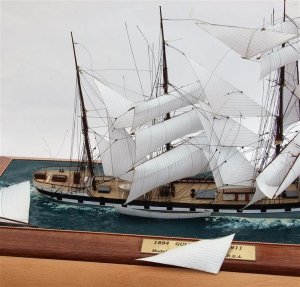 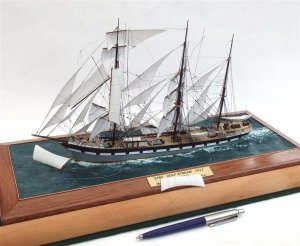 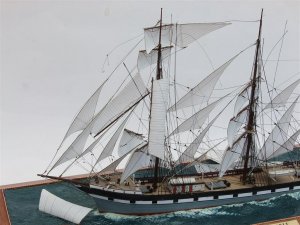 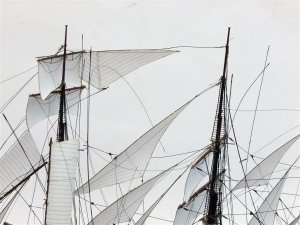 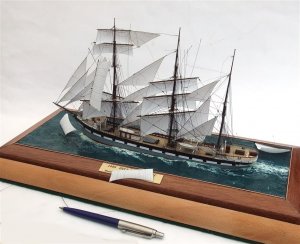 Ugh, that is awful.

Can it be repaired?

I don't suppose I could get it back to the quality it was before, unless I took the masts out and re-rigged it completely. Even so, I might damage the sea when doing it, and it would be much more difficult to work on stuck in the relatively large base. The courier firm said "It isn't too bad, it just needs some sails re-positioning and a bit of rigging re-threaded!"
Still waiting what the insurance has to say, but I expect they will wriggle out of it!
Bob

Today, 31st July, 2018, the insurance agreed to pay £400 of my claim for £500. As I paid £70 for delivery, this amounts to £330. I have accepted, cutting my losses, because I haven't the energy to go on arguing with them. I want to move on. But I will no longer send them anywhere by courier, it will be collection only from now one. That will probably reduce the demand considerably.
Bob

shipbuilder said:
Today, 31st July, 2018, the insurance agreed to pay £400 of my claim for £500. As I paid £70 for delivery, this amounts to £330. I have accepted, cutting my losses, because I haven't the energy to go on arguing with them. I want to move on. But I will no longer send them anywhere by courier, it will be collection only from now one. That will probably reduce the demand considerably.
Bob
Click to expand...

Good to know you’ve been “compensated “.

Not very well though. When I get the £400, I will have to pay income tax on it that will reduce it to £320, and when you take the £70 I paid for delivery off that, I am left with £250! I have the damaged model, but I doubt if I can get it back to the condition it was before it was damaged. I refunded the buyer in full as soon as the damage was reported, so I am the only loser here!
Bob
Last edited: Jul 31, 2018
S

I have now laboriously replaced and re-rigged the fifteen fore-and-aft sails. I now have to replace and re-rig the twelve square sails - Bob

I imagine it will look as good as it did initially.
S

Yesterday, I accidentally caught the bottom edge of the display case on the masts when lifting it off, causing a fair amount of rigging and sail damage. The remainder of the day was spent repairing that, and getting it back to the condition it was in the morning.
Today, the fore and mainsails have now been fitted and partially rigged, as have the fore and main lower topsails. On completion of the rigging of these four sails, I will move onto setting and rigging the upper topsails. This is proving quite tedious.
Bob

I rigged the lower topsails yesterday, and this morning fitted the upper topsails, and completed the running rigging on all four of them. The four t'gallants, and two royals that remain to be fitted and rigged, are much simpler sails to rig, so the end is at last in sight!