Last summer during a visit to Lunenburg, Nova Scotia, I was given a beautiful plan for a banking dory. These were two man boats carried on Banking Schooners that were launched each day on the open ocean to catch cod fish. Without the use of radar many of these little boats were lost in the fog from the mother ship and many men were lost. The dory laid 14 ft. on the floor and were capable of holding a full days catch of fish, but low on the water the boat was subject to being swamped and the fishermen had little chance of survival in the cold Atlantic water. My model is built to a scale of 3/4 in. to the foot. 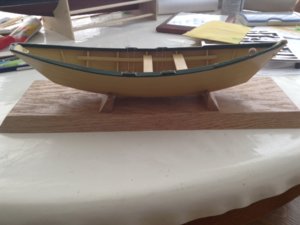 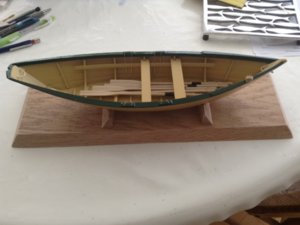