Not a ton of progress between yesterday and today but I did manage to keep the ball rolling. I sealed the rest of the interior of the hull and the remaining two decks with Tamiya Flat Clear Acrylic. And I got the ladders installed on both sides of the ship. I used a triangle to keep them square but the curve of the hull makes them look slightly off. Either that or I have a crappy triangle 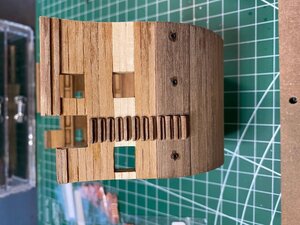 No photos today but I got a few things done. I attached the platforms for the chain plates to the side of the hull and sealed the outside of the hull with Tamiya Flat Clear. I also got the decorative metal side pieces that line the companionway cleaned up - they are nice pieces but had some seam lines that I wanted to get rid of - a little filing followed by a polish took care of that.

I got my copper plates in - 150 plates. Looking at the plates next to the portion of the hull that needs to be plated makes me wonder if I have enough. I may need to order more.

I'm also toying with an idea and I wouldn't mind some feedback. Since this is a cross section model, and intended to show the construction of the ship, I'm thinking of only painting one side and leaving the other side bare wood (walnut, maple, etc.). Not on the inside of the ship, just on the outside. Thoughts?

That plan sounds good, painted and copper finish on one side and beautiful wood on the other.
D

Kkonrath said:
That plan sounds good, painted and copper finish on one side and beautiful wood on the other.
Click to expand...

Thanks. Yes, it was a good plan. However, the best laid plans of mice and men...Some white paint got under the masking when I was airbrushing the interior so I was forced to paint both sides. Oh well. It still looks great.

My plan for the exterior was to paint and copper plate one side of the hull and leave the other side bare wood to show off my handiwork. However, when I airbrushed the inside of the hull white (Tamiya Flat White - XF2) thinned 50% with Tamiya thinner some of the paint got under the tape I used to cover the outside cannon ports and I was forced to paint the whole exterior. I hand painted Vallejo Black so I wouldn't have the same problem. Anyway, it still looks good.

The decks are just slid in for now. I won't install them permanently until after they are detailed. Then I'll work from the bottom up. The only thing I'll need to do between the decks after installation is install brackets to the sides and install the columns. 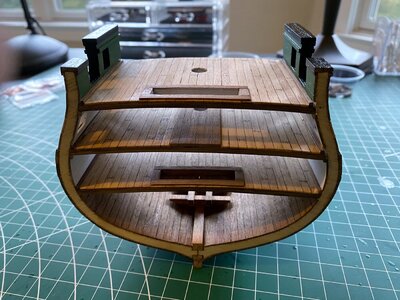 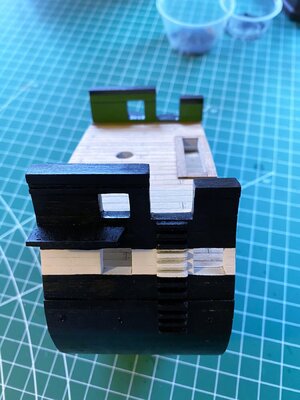 Next up I'll give her a coat of Testors Dull Coat, add the copper plates, patina the plates, and mount it to the display base which I may make from a piece of live edge maple I have laying around.

I just joined this forum and noted in my intro that my wife presented me with this kit in 1985. After numerous moves, the project has probably sat idle for ~ 30 years. Now I have a place to spread out and work on it. Currently, I am reviewing my inventory and getting familiar with the plans... again. This is my first wooden ship model so the rigging details are a bit unfamiliar and looking at the rigging plans on Table 3 and Table 4 is a bit confusing / overwhelming. I did note that the plans call out for painting the rigging black as all of the threads are beige. I'll be purchasing the black rigging threads instead. Hope you don't mind me asking questions and chiming in on your build log. Excellent work!
...henry

Is this the last build update? I can't find the the rest of your entries.