Yesterday I fulfilled a long lasting wish. We visited maritime artist Jan de Quelery for buying an oil painting of a 17th century ship.
Jan is de Willem van de Velde of the 21st century. He is painting mainly 19th and 17th century ships in oil paint and aquarel.

He is famous for his 17th century sea battles which he paints at 2,5 mtr x 1,5 mtr. These go to museums etc.
He painted many of the Dutch Anglo sea battles but currently he is working on the battle at the Etna of the Dutch against the French.

We were privileged to join him to his workshop to see this work of art in progress which he just started. Below you see this work with Jan in front of it. On the left the Dutch fleet and on the right the French. First a drawing is made which is painted over with oil paint afterwards. A painting of this size takes Jan two years of work fulltime. 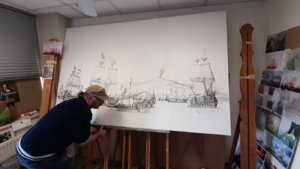 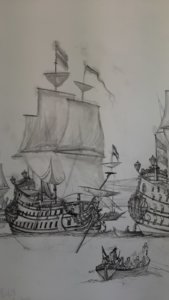 Two of the finished works, still for sale. 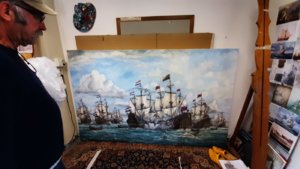 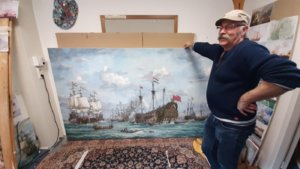 And a detail, these paintings are so detailed that they are painted with a magnifying glass in his hand. See a detail below. 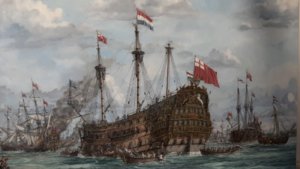 These masterpieces are unfortunately out of my budget so I went for a smaller work and made a selection out of these three works of art in oil paint. 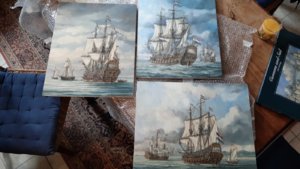 Finally I selected this one which is now being framed, if I picked it up from Jan I will post more detailed pictures.

As Jan has so much beautiful works we also bought two aquarels. Like a kid in a candy store we had to choose again. 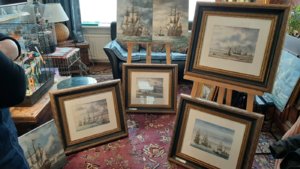 These are the selected two aquarels for in our refurbished hall. 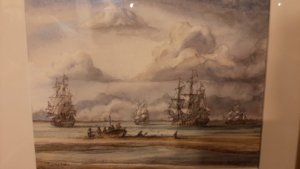 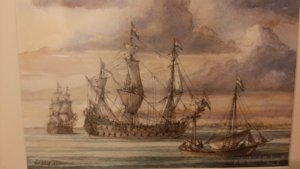 Jan also published a book with all his drawings and paintings. I got the book as a gift from him and will post some pictures of it later this week 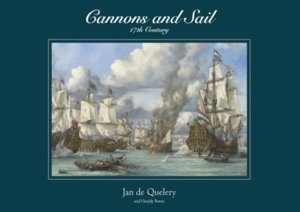 To check it all yourselve see below his website.

This is the website of Jan de Quelery. Jan is a very talented painter, who knows exactly how to picture the atmosphere of ships, the sea and the sky.
www.quelery.nl

Great selection - and I am jealous !!!! Great Art
Maybe I am able to afford the book - I am looking forward ....

Yesterday the framing of my painting was finished and I could pick it up from Jan.
Isn't she a beauty stil wrapped in protective film. This weekend she will hang on the wall above my Friesland model. 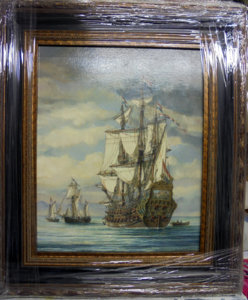 Here a detail from the stern with all its delicate detailing, a beautifull piece of maritime art. 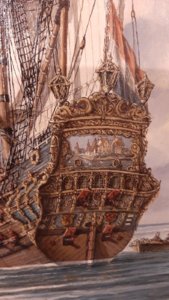 WOW, WOW, and AGAIN WOW, FROM MY LATE WIFES SID A FAMILY OF ARTISTS A LOT IN MY PLACE, ONLY HER AUNT COULD COME CLOSE TO THIS BUT NEVER TO MATCH IT, THIS IS TRULY A MASTER ARTIST AT WORK JUST FANTASTIC. THANKS FOR SHARING> Don

This is really a great painting, but not only because of the beautiful ship of line, but in combination with the smaller vessels.
Great

And yes finally on the wall. 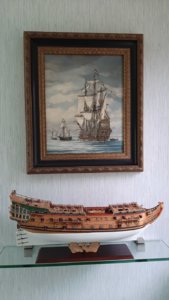 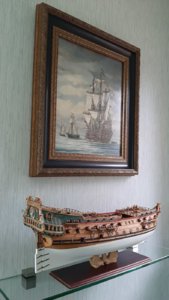