Here is a miniature of the tea clipper Norman Court, built to a scale of 32'=1". Scratchbuilt. The masts, spars & rigging are 100 per cent metal. The masts & spars are a combination of brass rod & tube, copper rod and silver steel, whilst the rigging, including ratlines, is fine copper wire. No knots at all. Most of the rigging is glued on, but the ratlines are soldered across the shrouds.
Bob 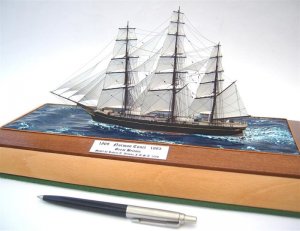 Very neat. Do you keep all of the ones you complete or sell off some of the older ones.
C

These smaller models are just so neat! :greetings-clapyellow: I could NEVER do them ;-) .

I imagine that with these small models space is not as big as a problem as it is with us folks doing models that are over 35 inches long. :grin:

I will have to dedicate one car stall in my three-car garage to display all of my models in their cases, when I get to that point.
S

Thanks for replies. I really have to get rid of them because since I left the sea in late 1992, I have made over 250 of them. From 1992 until I took my pension, I made them full time and most of them went to the twice-yearly maritime auctions at Christie's London, but they discontinued maritme sales several years ago. There is another maritime auctioneer in London, but since they introduced a "marketing" charge of £50 per lot, I have not sent any more, as that plus transport, insurance costs and commission comes to about £150 per model! That left very little profit and the income tax took 20 per cent of what was left as well. When I took my pension a few years ago, I did stop building them, but found that I missed it so much I started again. Since then, I have taken the odd private commission if the subject appealed to me, but the Amarna that will be completed today is my final private commission - no more - it is too much like work! From now on, it will be a pleasurable hobby again, building only what I feel like!

Lots of modellers just decide that they could never build a miniature and there the matter ends. I can assure you that it is infinitely easier than building large ones as I went from 8'=1" to 32'=1" myself literally overnight in the early 1970s. It is easier because I don't have to bother with knots, especially when fitting ratlines. A whole set of lower shrouds can be made within 15 minutes.
Presently, I will be showing you all some of the "tricks of the trade!"

Once upon a time, I could build big ones myself, but not now, I simply do not have the patience or energy any more!

Thanks,
They don't take all that long! AMARNA took about 123 hours to complete and I was very tired of it eventually. Scale far too big for my liking. Most of my models take about 50/60 hours!
Bob

I was very intrigued when I saw the mini-ship from you .

Thanks, merchant sailing ships are easy enough, no fancy decoration or anything like that! The rigging is also very easy, but can be quite repetitive. It is far more difficult to make a steamship with lots of portholes, windows, rails, lifeboats, decks, deck machinery etc.
Bob

I'm really fascinated by your skill. :bow-blue:
I'd like to see the technical construction sequence. When a full build-log?
Congratulations, Laerte
:happy-wavemulticolor:
S

Thanks,
There is a build log of the four-masted barque Pass of Brander running in SOS Build Logs Scratch or from Plans, but it isn't attracting much interest at the moment. If you click on my profile (below) and then go and have a look at my website, you will see much more!
Bob
C

And another ... as impressive as almost all of them. If I may ask, at what price do you sell them?
S

Carl,
This one, the Norman Court, sold at a maritime auction in London several years ago for £600.
I don't send them to auction any more because the overheads (transport, commission, marketing fees etc ) are now too high!
Bob