Hi gang,
just wondering if there's a hobby paint in a spray can that resembles a true metallic black for painting cannon barrels ?
I would prefer not to use black, but something that gives a metallic look like the photo below- 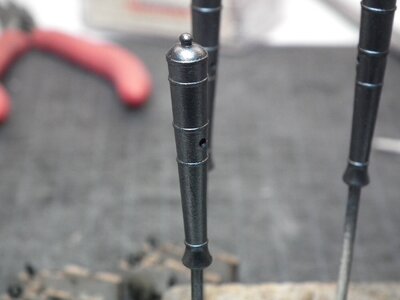 Brian077 said:
Hi gang,
just wondering if there's a hobby paint in a spray can that resembles a true metallic black for painting cannon barrels ?
I would prefer not to use black, but something that gives a metallic look like the photo below-

Are your barrels wood or metal. Each can offer different finish options. Modern gun bluing is actually that: a dark blue almost black as you have probably seen. I don't actually know what the finish was on gun barrels that were not bronze in the 1800's. It may be a similar speculation to what the actual surface color of decks were that were holy stoned regularly and not as we see them in "walk-on" tours of the old ships now. I'll check with my younger brother who is a walking encyclopedia of ships of war, British and French from the Napoleonic era. The works of Jean Boudriot may give some information. PT-2

I have 52 resin cannon barrels on order from Poland. Just wanted to have the paint ready for them when they arrive.

Brian077 said:
I have 52 resin cannon barrels on order from Poland. Just wanted to have the paint ready for them when they arrive.
Click to expand...

I'll send on what I receive back from by brother.

G'day Brian, someone posted awhile ago about Rustoleum paint that you can buy at Bunnings, said it gave a metallic finish, hope this helps,
.best regards John,

Humbrol once did a range of metallic enamels collectively called 'Metalcoat'. These were buffable and looked just like your example.

Showing my age here, but when I was young, it was common to see old cannon embedded in the streets as bollards. I don't recall seeing any substantial rust on them; where they were touched regularly they developed a sheen much like the finish produced by what we called 'Black Lead', a paste once used to buff onto iron cooking ranges. The rest of the surface was a dull satin black.
Later, copies were made (with a distinctive casting ridge along their length) which did rust when the black paint was damaged or worn off.
I'm no metallurgist, but I do believe there are some cast iron alloys that don't rust.

Hi Brian, I have used DecoArt Charcoal from the Matte metallics range.

decoart.com
This was/is available at the arts/craft section at Bunnings.
I use a lead pencil to highlight raised sections and it gives a good result.

Hello Brian, You can paint with the black paint of your choice, and then lightly rub with your fingers using graphite

Thats a good idea Jim, think I will try that technique.

Brian077 said:
Thats a good idea Jim, think I will try that technique.
Click to expand...

I have attached a photo of the steel barrel cannon that I turned 40 years ago but only fired it for the first time today with a black powder charge for a 9/32 inch ball bearing. Even with a 2/3 charge starting trial it was very effective in the shot. This finish may be something like you are looking toward but I cannot say a paint color so your prior suggestions in trials will lead you to your desired appearance. Scale will also be factor. This barrel is 5-3/4 x 7/8 inch max diameter. Not having the carriage completed I used an F-clamp 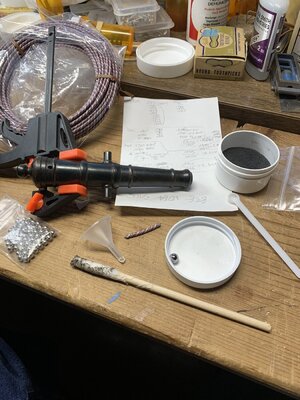 Brian,
Here is the general reply from my brother, branching out from barrels to carriages as well but no paint recommendation:

COLOR -- In general no standards existed for ships, hulls, moasts, etc. Guilding was used but sparingly since it reflected monarchial and aristocratic tastes. Some of this was due to the orgins of the officrs (see West and South above)... Most of them were Whig. the Military was Tory. Whig Blue, Military Red (and aristocratic in its officers.)
GUNS and CARRIAGES -- Captain's choice or admiral's or commodores dictates. Much depended on what was available. Gun decks at first were red, but switched to while (for better light and cleanup). The best gudes are the colors in HMS TRincomalee and HMS VIctory videos, but this reflects restorer's tastes. Barrels, generally black. Carriages, generally not painted. BUT, browns, grays, and even yellow and red for carriages were not unknown. It had more to do with preservation (rust and rot) than spit and polish. However, some captains an dadmirals who were spit and polish who seldom if efer fired their guns more than regualtions for power allowed (skimpy) liked to paint their guns and tampions, and cover them with pained sail cloth to preserve their looks. Can't go wrong with flat black & flat
HMS Victory gun carriage colors, though.
ABove beased on the reading I've done, and no more.. .

This is a copy and paste from his email reply. PT-2

So at the end it was up to the ship builder and the owner (and it is up to us, builders and owners of the model) to chose the colours. Personally, I prefer natural timber carriages and painted black / graphited barrels (sometimes turned from brass left in natural colour). In the Australian Maritime Museum there is one restored gun from the Endeavour, its carriage is natural timber. At the other hand the replica Endeavour has painted red carriages and the situation is the same on the Duyfken replica. Just to clear the picture...
János

Thank you Janos and PT-2. I think the simplest approach of matt black and rub with graphite is the way I will proceed.

Brian077 said:
Thank you Janos and PT-2. I think the simplest approach of matt black and rub with graphite is the way I will proceed.

What will be your color for the carriages? IT seems that they changed over the changes of whom so ever was in command or carrying the flag. PT=2

They are boxwood carriages, so I will just coat them with a clear poly varnish.

Brian077 said:
They are boxwood carriages, so I will just coat them with a clear poly varnish.
Click to expand...

I can understand that decision. Sounds like matching the tone of the other wood in the build. If you went to one of the historical colors it could really clash and stand out with what you have overall. PT=2

Have you tried Tamiya X10 Gun metal, it is a dark color nearly black with a metallic fleck, you may be able to put a clear flat over it if it was too glossy.
Just a thought.