A 19th Century ship that was prominent with coastal shipping along the western coast of Norway was the Nordlsandsjekt. A Jekt was built and used along the coast of Norway from Nord-Troms to Hardanger from the Middle Ages up to the 1900s. They were first used in the Viking age. The earlier types used clinker style construction and were used until its use became even more widespread, when in 1294 the legislature prohibited foreigners from sailing north of Bergen to trade. Then in 1381 a royal decree determined that " wealthy peasants" could not have or sail overseas with cargo boats larger than four loads, giving a cargo capacity of 48 barrels or around 5.6 tons .

This had the effect of causing a great deal of shipping traffic along the coast, bringing fish from the North to Hardanger and returning to the North with supplies needed from the South. By the 19th Century, a significant evolution in the design of jekt that even a glance at its design reveals a vessel of high durability and that lends itself to some hard usage under a wide range of weather conditions.

From the 19th century until early in the 20th century, when steam ships came along, the Nordlandsjekt evolved into a design that to me is quite unique. It had a very wide hull and a short prow, which makes it look not unlike a pit bull

This kit is from Wisloff, a developer and manufacturer of kits that tragically burned to the ground in 2015. Mr. Wisloff has had a very limited Internet presence since that tragic circumstance and I hope he can be encouraged to allow his designs to be produced by some other manufacturer. Before they basically disappeared from the market, I have been able to obtain a few of the kits,: Olselver, a river boat with a very endearing design, The present project, Nordlandsjekt, a Norddlandsbaten that resembles a Viking ship, which Virtakuono Is doing a build of here on this site, as well as Froya, a ship used during WW II to outrun the Nazis in the North Atlantic. That part of the Norway conflict didn’t go too well for the Nazis. I will add to this as I can. I have pics of early hull construction and some that give some overview of the design. 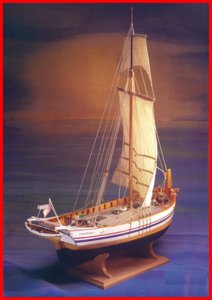 This is a picture from the kit and its contents. Basic sail layout, with one mast without stays. The skiff looks like it is fun to build and the hull construction allows for good precision as the kit is designed.
D 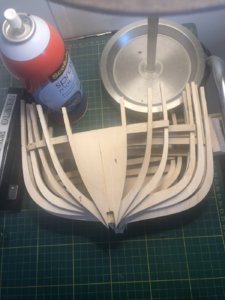 I really like the framed construction of this kit, as opposed to the bulkhead type of design. One part of this that concerns me at the moment is the complete lack of beveling the frames in the instructions and it is not seen in the plans. I will have to address that on some level inevitably.

This looks a very nice an unusual kit.Don't worry to much about the frame bevels,just treat it the same as you would Fairing a plank on bulkhead build.Assemble the skeleton and sand the frames to suit using a planking strip as a guide.

Very interesting kit - Many Thanks for starting this log
D

NMBROOK said:
This looks a very nice an unusual kit.Don't worry to much about the frame bevels,just treat it the same as you would Fairing a plank on bulkhead build.Assemble the skeleton and sand the frames to suit using a planking strip as a guide.

Thank you for that. I have had mixed results with planking, so I want to make sure this is done well, the planks are 2x10mm.
D

I am nearing the completion of the framing, after making a building board, assembling the frames and keel. I am going to glue the whole structure together before uploading pics. As expected, the kit has some solid craftsmanship, although I may have welcomed some more detailed plans. I hope everyone is staying safe and well.

deepriver27 said:
I am nearing the completion of the framing, after making a building board, assembling the frames and keel. I am going to glue the whole structure together before uploading pics. As expected, the kit has some solid craftsmanship, although I may have welcomed some more detailed plans. I hope everyone is staying safe and well.
Click to expand...

Looking forward to the pictures.
D 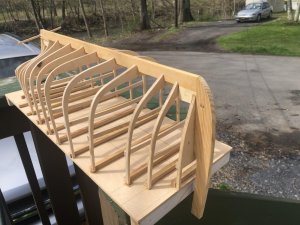 The skeleton and building board mostly assembled, need to clean up some glue overflow and sand down the transom support. I am trying to decide how to handle the transom/stern area, since there is a wide variety of configurations with this type of ship. It was built for a hard-working crew with a variety of types of cargo. I will post some pictures of some of the designs I've located on working ships and in museums around Norway once I can decide which ones to include.

One of the attributes of this kit that I was hoping to capture (but didn't) but will in subsequent photos is the series of deck beams that are pre-made and that both give guidelines for the deck and add support to the frames. Today looked like the last sunny day in the Catskill Mountains for a while so I wanted to get this pic included before the weather turned nasty again. Be safe and well, everyone.

Some photos that show some different transom designs 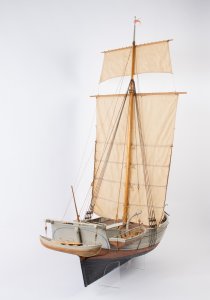 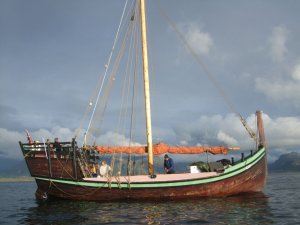 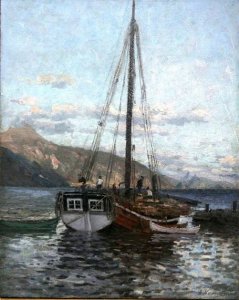 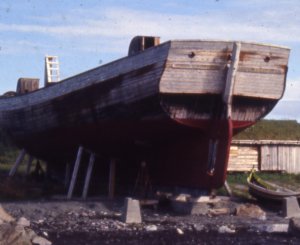 I have my chair pulled up close to get a good look of your build.

How did you come to pick this Norway Costal boat?

Kkonrath said:
I have my chair pulled up close to get a good look of your build.

How did you come to pick this Norway Costal boat?

I saw this kit from Wisloff and became intrigued by its design. After looking into its history, I really wanted to give this kit a try, which was just prior to Wisloff's facility burning, which was really a sad story. I figured that I'd better grab as many of Wisloff's kits while I could and I am glad I did. My interest in Norwegian ship design sort of happened because my Grandfather had survived the wreck of the Norge when coming to the US. I have been searching for a set of plans or building plans for Norge for after I do a scratch build on a larger scale of Gjoa. Both projects will require that I develop my skills more thoroughly. My experience though in doing a scratch build of a New Bedford whaleboat convinced me that I could possibly pull it off, despite battling tremors and bad eyesight. So in a nuttshell that's my story and I'm sticking to it. . Thanks for asking.

Family history with boats is a good motivator.

I remember a few boating stories as a kid, mostly fishing tales, and one time I got to go fishing with my dad and uncle in his small metal fishing boat in Green Bay, located in one of the Great Lakes in Wisconsin.

My dad had a boat kind of, when he was in US Air Force in Germany, just after WWII, he bought a used DUKW, or Duck Boat as they were know, a boat on wheels, he said he did take it swimming once or twice while he owned it.
D

This build is on hold for the time being. I am in no way abandoning it. I was released from the hospital recently after a difficult 2 month stay that left me with nerve damage in my hands that will heal over time. I'm finally able to type which is a good sign but trying to set up my workspace again is rather a far fetched notion. I'm hoping and praying I can get bacck to this soon. I am in a state of withdraw from modeling.

, I have summoned the needed courage to return to this build, since an amazing occupational therapist has helped me to work around my nerve damage. The next stage is to dive head-first into the hornet's nest of hull planking. I'll need your prayers. Haha.
D

You will be able to do it without any problem. Beside that, double planking or painting the hull is always our saver for any mistakes.

I just read the thread for the first time and is a beautiful ship and kit.

Wow, what a great thread, looking forward to more.