Yesterday, a surprise e-mail from across the Atlantic, informed me that some model ships I built 46 years ago had just arrived safely from the UK. The buyer gave me permission to post the images - Here is the first, the wool clipper Ben Voirlich - iron hull - This model was completed in 1973. 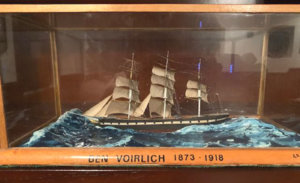 Was it lost in mail and it took so long, until it arrived at your customer?
S

Since I first sold it, it has changed hands four times, the selling price increasing each time. This next one, the County of Inverness followed the same change of ownership over the years. 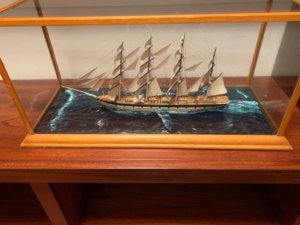 Always a joy to look at your work

Thanks, but neither of them were very good - Here is another, HMS Resolution. I sold this one for £4! 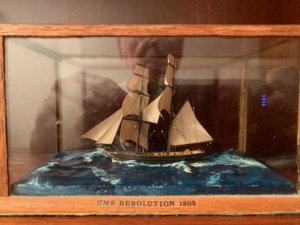 Just beautiful Bob, you have certainly got the touch, and a lot of craftsmanship,

Thanks John,
None of the above are particularly good, although I was happy with them at the time. Very rough finish on the sea, bases and names. But I had not been building miniatures very long - Here is another of the same batch - Penang - I sold this one for £25. Built it aboard Good Hope Castle - Bob 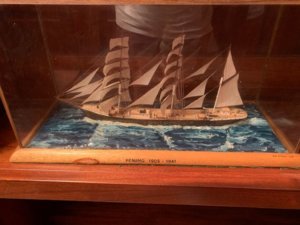 Thanks for replies,
It continues to surprise me that the above models are regarded so highly. They were completed at a time when I was only starting out in miniatures and were rather clumsily built, and in my opinion, practically anyone could obtain similar results as first efforts in miniatures, and I only got a few pounds for them. Here is another of the same batch, but this one was built about twenty years later, and is far superior.
Bob 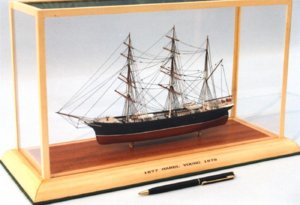 I remember a time where you where posting all the step of your build, how you where sad when the action house close the naval section of there business. It was so nice to look the process you where used

Thanks Charles,
There are still three maitime auction houses in London that have annual maritime sales, but I haven't sent anyting for several years. The reason was the cost of sending them, plus the high commission rates, and the high cataloguing fees (In one case £150 no-returnable fee for every model entered in a sale) that made the auction house end up with a considerably larger share than I got. Then the income tax took one fifth of what was left. It simply wasn't viable anymore. The demand for them by private collectors is as high as ever, but at the age of 75, I don't want to spend my entre life building them, to do so would take all the pleasure out of it. So I just build what I feel like these days. Also, over the years, quite a number have got damaged in transit, and I have been left with the bill because in the UK, distance selling rules, state that the seller is 100% responsible for getting items to the buyer in perfect condition. I lost over £400 when the last one got damaged in transit earlier this year, so that was the end of it. Completed models must be collected in person, and this has not actually reduced sales, and is a lot less to worry about. As you say, I used to post detailed build logs online, but this was a lot of work for nothing. All my building logs are now produced in the form of downloads, many of which are available online for less than the price of a cup of coffee, and this does provide a steady income. I know that most model shipbuilders would never dream of selling their work, but I can't see anything wrong with it. I left the "rat race" of full time employment at the age of 48, 27 years ago, for a quieter and less stressful life, that has generally worked out fine, and I have never received unemployment benefits of any kind. I did notice that years ago, when I was putting detailed build logs on Model Ship World, I got lots and lots of requests for plans and information. I generally stopped everything to provide these things free of charge, only to be met with silence in most cases, and even a simple e-mail "thank you" was very rare.
Here is another one of the above batch of models that surface the other day. I ran a detailed build log on Model Ship World for this one, but got banned from there shortly after it was completed!
Bob 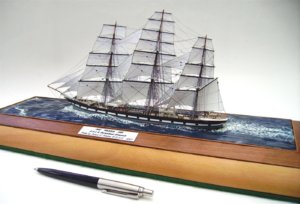 Here are the materials that I used for the Phasis model. 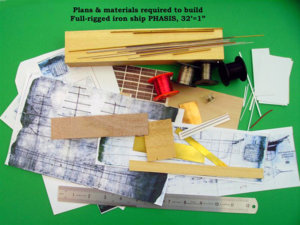 The more I read your logs the more I’m fascinated by your modeling. I plan on giving one of your models a go when the snow starts piling up outside. I’ve had to give up my outdoor Winter activities, (skiing, snowmobiling, etc). Thank you for all your information and examples. I for one look forward every post you make.

Robert, I love your work and admire all of your models. It seems you delighted in every build but the commercial side took the edge off it.
I had a similar experience with my miniature landscape paintings. Materials were minimal, but buyers wanted 'posh' frames, mostly I would be lucky to get that cost back. A shame, as I was beginning to get a few regular collectors. I was approached by an agent who wanted to sell my stuff (in the 1990's). After some discussion it was clear he would get £200 commission per painting, which at the time I was struggling to get a total of £20! In the end I just packed it in. Rather selfishly I never tried to show or sell my best stuff, which I still have. After all these years I look at them and wonder who did them.
It would be great if you assembled all your photo's together. That in its self would be a worthwhile legacy. Just a thought, but I for one would be happy to pay for a download.
You are a fine chap and it's our privilege to 'know' you.
S

Yes, that is exactly it. I don't exhibit them anywhere these days, although they are often showing up in the most odd places, all over the world. I seldom take them to our monthly model ship society as eyes usually glaze over and it is as if they are not even there! When I did take them to exhibitions years ago, most people just passed them by, probably on account of their small size, and the fact that they didn't carry guns. It is mainly collectors who like them.

How big were they? I love the way you placed them on the water. Very nice work.
S

They are not very big - Here is the larger Donna Francisca, the four-masted barque Marion Lightbody and the smaller Taitsing. My wife paints the seas, although she only painted the Phasis, above, as we hadn't even met when I did the earlier ones! 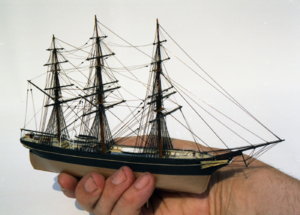 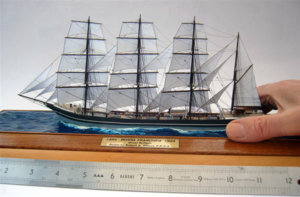 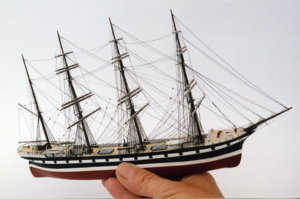 It's the scale that's so appealing.
S

The most common statement I hear is "I could never do that!" And yet it is far easier than making big models with all the hassle of rigging, and hundreds of tiny knots. I haven't used knots for many years - just don't have the patience! Steamships are far more difficult than sail though - multiple decks, windows, portholes, lifeboats, deck machinery, ladders, rails, side stanchions 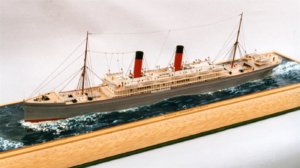