Dave what book do you have for this. THANKS Don 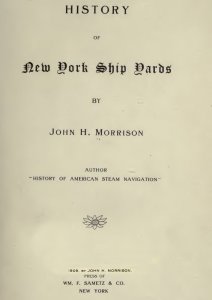 didit said:
there was a wreck studied of a ship built in North America by Rene Robert Cavalier La Salle. Here is a wood cut of the ship under construction, looking at the round stern it looks like a Fluit this was built around 1670ish and the Dutch were well established in North America at this time. There is a thesis on this wreck and several plans drawn.
One thing I noticed is the palm tree odd because the ship was built in upper New York the wreck studied was in Lake Huron, Canada best to my knowledge palm trees do not grow in Canada.

HOWEVER the wood cut was published in nouvelle Decouverte d'um tres grand pays situe' dans l'amerique 1697 so that is like almost 30 years after the building so father Hennepin who traveled with La Salle, maybe the good Father confused details from the travels "understandable"

This is the Griffon, or? 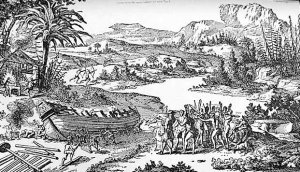 At https://en.wikipedia.org/wiki/Le_Griffon you can find this explanation (together with a lot of references):

Le Griffon's pattern closely followed the prevailing type used by explorers to cross the Atlantic Ocean to the New World. The exact size and construction of Le Griffon is not known. The widely referenced antique woodcutting of Le Griffon shows her with 2 masts but many researchers believe she was a 45-ton barque with a single mast with several square sails and 30 to 40 feet (9.1 to 12.2 m) long with a 10-to-15-foot (3.0 to 4.6 m) beam.

Hennepin's first account says she was a vessel of about 45 tons; his second says 60 tons. Because his second account has numerous exaggerations and cases where he credits himself for things that La Salle had done, Hennepin's first account is considered more reliable. In any case, Le Griffon was larger than any other vessel on the lakes at the time, and as far as contemporary reports can confirm, the first named vessel. 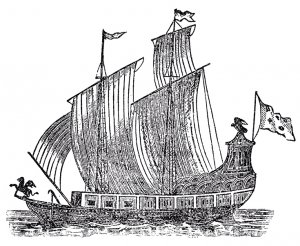 This is the Griffon, or? 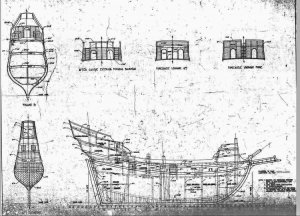 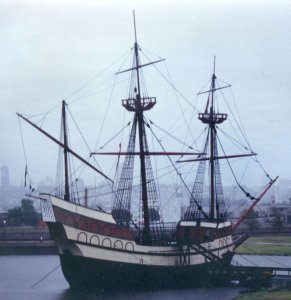 it is not the size of the file posted it is because the original book is bigger than the scanner I could rescan the pages in 2 sections.

rather than rescan the pages in pieces and stitch them back together if you have any question about the text just ask and i can look at the original and tell you want is missing
Click to expand...

I can figure out most of the info, so if I have a question I'll sent you a note, Thanks Fred

My translator app going to get a work out. [/QUOTE said:
For what it's worth. I've found DeepL-https://www.deepl.com/translator
Does a better job than google translate. Interface is a little clankier, with no resident "translate web page" feature, but the results are worth it. A lot of great information is bubbling up in this thread!
Click to expand...

If you want to build it based on a kit then you should have a look at the site if Kolderstok models. They specialize in 17th century dutch ship modelkits and have a great kit of the Duyfken.
Duyfken is a ship of the type we now in Dutch as jacht. A small type of three masted light sailing ship. You would expect in the early 17th century the vessel used would be a jacht or a fluyt.
Both Duyfken and the Halve Maen (half moon) are jachten. If the ship was a freighter a fluyt would be more probable as she has much more cargo space then a jacht.

See the link below.
http://www.kolderstok-models.com/duyfken.en.html

If you look for scratch build of a ship like this or a fluyt you must have a look at the book of Ad Hoving about the ships of Abel Tasman. He used a fluyt and a jacht to sail around australia and new zeeland to map these in the 1640s. Ab Hoving wrote a book about these ships and reconstructed them incl all drawings neede to build the models.
This book incl drawings is also available in English.
See the link below to the Dutch website of the Publisher. I do have the Dutch version myself as I have the planning to build the fluyt as my next project.
https://verloren.nl/boeken/2086/253/2540/maritiem-en-waterstaat/de-schepen-van-abel-tasman

Thanks Maarten, I am going to take a look at your suggestion. The fortune is still a build away. But I keep thinking about a scratch build but worry about not having the talent to do it.

You might want to get "Dutch East India Company Shipbuilding" by Wendy van Duivenvoorde. 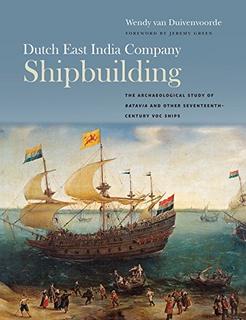 It's a treasure trove packed with Information.

...and another book that might be of some help 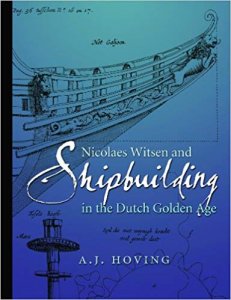 @FredV was the Fortuyn you are interested in built in 1613 or mentioned in 1613? Obviously in those days ships weren't built to plans, instead the shipwright received a "Zerter" from the company ordering the ship, a charter in which some key dimensions were determined. In Wendy van Duivenvoorde's book is a complete charter of a 600ton ship from 1603. Also in Witsens work are several charters but these are from ships from the middle of the 17th century. One thing should be certain and that is that the Fortuyn was built shell-first and not frame-first. This will play an important role in designing the ship. Personally I like the idea of the Fortuyn being a yacht and not a Fluyt. A Fluyt was used when a large cargo was to be transported or was to be expected (whaling). A yacht as used for getting around.

Olympic1911 said:
You might want to get "Dutch East India Company Shipbuilding" by Wendy van Duivenvoorde.

It's a treasure trove packed with Information.

Hi who sells this one is it on Amozon. Thanks Don
D

FredV said:
Thanks Maarten, I am going to take a look at your suggestion. The fortune is still a build away. But I keep thinking about a scratch build but worry about not having the talent to do it.
Click to expand...

You need to get a Copy of "The Ships of Abel Tasman" - full set of plans on CD for two dutch ships from this period - a fluyt and a galleon. Book set available in Dutch, German, English.

Also look at "Het Schip van Willem Barents" only in Dutch, but still a good buy and set of plans.