I have just found this auction listing, and result. I completed and sold the model in June 1997 as a private commission. It took 103 hours to build, and that included the display case and carrying case. It re-appeared 16 years later in a London auction house in October 2013, and went for £2,400. This is the link with the results - https://www.charlesmillerltd.com/au...=0&au=43&ef=&et=&ic=False&sd=2&pp=48&pn=6&g=1
M

Beautiful model Bob, just like all of your others. In any case, it amazes me overall what people will pay for things in general. Who is the type of person that spends that much money for a small model just to display? Perhaps the purchaser was a crewmember of the ship you modeled? Or, is this type of model a common collectible by auction houses? I am not familiar with that arena. What is the connection?? I am just a curious observer...
S

It was also damaged! The person I made it for wanted a glass case rather than an acrylic one. Shortly after he purchased the model, he dropped a screwdriver on top of it, and cracked the top panel. He removed it, and replaced it, but the wood edging round the top was never the same again, and if you enlarge the image, you can see the uneven edging fairly well. He had sailed in the ship as a crew member (as I had). After his death, I believe his family sent it to the auction room. I only got a fraction of what it sold for the second time when I built it as a commission! This has hapenned on a number of occasions now. But I am sure they go for high prices because they are not mass-produced, and are not kits. Collectors want what other collectors have not got. When I sent models to the same auctineers, I never got prices like that, and eventually stopped sending them, but that was years ago. Whoever purchased it would have had to pay a 15% buyers commission on top of the £2,400!
Bob
M

The model has history (owned by a crew member), and was scratch built (also by a crew member). Those two things combined with the unique subject adds a huge amount of value for collectors. Amazing!! I just want to know what makes "collectors" like that collect!! LOL. Like Jay Leno's car collection... I ask myself why? I don't think it has anything to do with money. It's like you said.. just to have what other collectors dont have. Bragging rights? Wow.. now that is an expensive brag.

Honestly though.. I think you should get a kickback off that auction!!!

If you think the Edinburgh Castle did well, look at this one: https://www.charlesmillerltd.com/au...=0&au=43&ef=&et=&ic=False&sd=2&pp=48&pn=1&g=1
I sold Clan MacTaggart for £400 initially, and it went for £3,200 at the auction room a number of years later. Don't forget to add the 15% buyers premium, that the buyer had to pay, plus the transport costs that would not be small. Generally, I have fellow shipmodellers to thank for this situation because of the almost universal reluctance to build models of merchant ships, as well as the reluctance of kit manufacturers to produce kits of them!. As far as getting a cut, I am not bothered at all. I got what I asked for them initially, and that was good enough for me. I like to see them selling in later years for vastly inflated prices, but like you, I cannot really understand it! But whichever way you look at it, mine are only going for "peanuts" when compared to the models of Donald McNarry, Lloyd McCaffery, Malcolm Darch, and a number of others. I am pretty much "Bush League," but feel that I am a good alternative for someone who ins't a millionaire, and doesn't mind something that is less than perfect if you look too close.
Bob

Here is another that sold in the November sale, the full-rigged ship Main! This model was started in the early 1900s onboard the Main. The bare hull was given to me in 1972 by a passenger aboard RMS Windsor Castle, in which I was serving at the time. I completed it, and presented it to the Marine Society in London, free of charge. Owing to them downsizing last year, they entered it in the sale where it sold for £400, despite being a bit worse for wear in some areas.
https://www.charlesmillerltd.com/au...=0&au=48&ef=&et=&ic=False&sd=2&pp=48&pn=1&g=1
Bob
Last edited: Feb 15, 2020
M

Curious... what does the crew, of a merchant sailing ship do, to pass the time during those periods when, there is no wind and the seas are calm?
S

The common assumption on the part of the general public is that we either drink or play cards!

In actual fact, in the merchant navy I sailed in between early 1961 and late 1992, the hours were long because merchant ships only have a fraction of the crew that a warship carries. In calm weather, there is an endless round of maintenance, chipping, painting, checking wires and rigging, holystoning decks, and watchkeeping for the officers. This went on every day, and weekends, public holidays etc were all the same, so that we would often not even know what day of the week it was unless we checked the calendar. For those keeping watches, there was the 0000-0400, 0400-0800,0800-1200, 1200-1600, 1600-2000 and 2000-0000. (Four hours on watch, eight hours off) Those off watch were expected to work as required when necessity arose, which was quite often. There was also some unwritten rule that the senior watchkeeper of each department, who kept to 0400-0800 and 1600-2000 watches, was bone idle unless they assisted in other work between 0800 and 1200 (after already having done 4 hours on watch. ) In the days of sail, most of the officers and crew kept two watches, four hours on, four hours off, as long as the ship was at sea, whereas the few who were on daywork, bosun, carpenter, cook, steward, donkeyman, worked from about 0500 to about 1700 daily. In port there was continuous cargo work in both cargo ships and passenger liners. Bad weather could give some respite from work in steamships, when it was not safe to go on deck, but it made it infinitely harder in sailing ships when they had to. Here we are on the poop deck of the St. Helena, the morning after a serious fire, stopped and listing, with an oil tanker standing by. I am in the centre in white unifrom, next to a stewardess. We had all been awake and desperately trying to save the ship (which we did) for 24 hours! - All in a day's work! The other picture is the chief officer (left), 2nd officer (centre) and myself, right) at Ascension Island after we had been measuring the double bottom tanks, awash with water and oily mud, aboard the passenger liner RMS St Helena. Another picture of a young seaman splicing wire under the eye of the bosun, RMS Good Hope Castle. It was a very interesting and hard-working life in the merchant navy, and when wars did crop up (if you like that sort of thing), we were dragged in anyway (3rd image, captain left, myself right - Falklands, 1982).
We also had a good supply of female company as well -
Couldn't think of a better way to spend my working life - All gone now - modern ships - Ugghh!
Bob 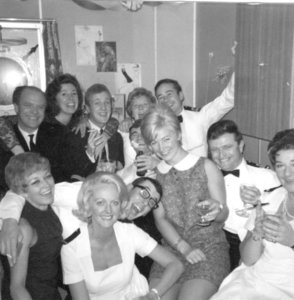 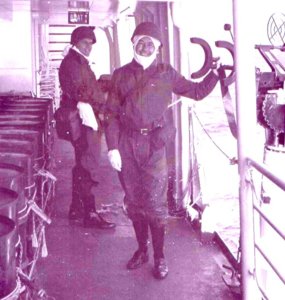 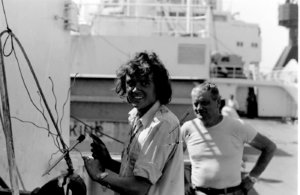 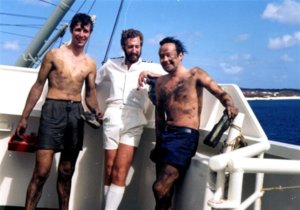 Bob, I might be wrong and please correct me if I am.... the impression you put into my head is that the answer to my original question is either 1) working 2) sleeping, or 3) partying.. perhaps you could give us amateurs an idea of percentages of duties in each of those areas?
S

Most of the time it was working. Even entertaining passengers in the evenings was pretty hard-going sometimes, when one was tired, and had to pretend you were enjoying it. On watches sleep was pretty restricted as one never had more than 8 hours off duty whilst at sea. The party of the type shown above would only last about 45 minutes before dinner in the evening, and was confined to the officers, as in large passenger liners, passengers were not allowed in our cabins, and we were not allowed in theirs. Those present in the above picture were all staff: Surgeon, dancer, children's hostess, hostess, three pursers,three hairdressers, two radio officers. Here are a group of us relaxing in the chief officer's cabin shortly after anchoring at St Helena, and the passengers all disembarked. Left to right - Purserette, shore official, agent, junior engineer, myself, captain, chief officer, 4th engineer.
The black and white pitcure is at San Carlos, Falkland Islands, showing the senior officers of RMS St Helena in the boarding party aboard the Argentinian supply ship Bahia Buen Sucesso, in 1982. Left to right: Myself (radio officer), captain, chief officer, electrical officer, chief engineer, purser. Didn't have anywhere near as much work to do when the Royal Navy took us over for the South Atlantic campaign, because all our passenger cabins were filled with naval officers, petty officers and ratings. I kept a bridge watch during the time we were anchored in and around the minefields, in rotation with chief officer, 2nd officer and a RN fleet chief, and so only had to work four hours on, sixteen off! I used to wonder what they did in the navy when they were not fighting!
Fatigue is the greatest problem in a merchant ship. But in exchange for all the work, it was a far more natural, varied and interesting life than you could find in any warship, and I was pleased to get back to normal after the Ministry of Defence finally released us after 13 months in the most apallling weather. Here are our "scars of honour" at the end of it all!
Bob 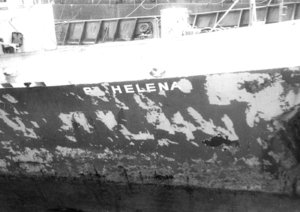 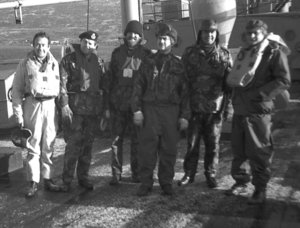 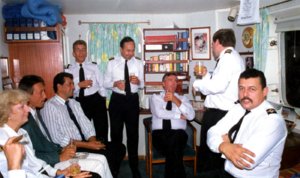