A couple of months ago I decided to get a start back into this hobby. I’ve built models occasionally over the years but nothing to major. After seeing the trumpeter kit of titanic, I couldn’t resist and it got me excited to build again.

I built this kit basically straight out of the box with additions to railings and rigging not provided. Trumpeter have now released an update of a wooden deck and extra PE parts which I didn’t buy as the original kit itself was quite hefty in price. The kit has amazing quality as it is and to be honest with the large amount of PE already included it’s a shame the upgrade kit isn’t included as standard even without a wooden deck.

This kit includes led lighting which I wasn’t interested in using as they also suggest placing large bulbs onto the top of the boat deck to mimic the upper deck lighting... unfortunately the bulbs look very much ungainly so I opted to built her without the lights. Other than that the kit is rather impressive! Very clean moldings as you’d expect for such an expendable modern plastic kit. You could go crazy with the detail though 1/200 for me is just a touch small to work on, so I’m happy with my representation of her.

Anyway, enough if that, I hope you enjoy the pictures. 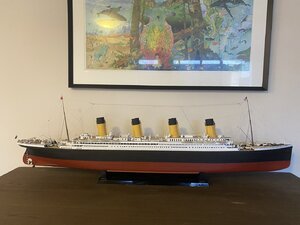 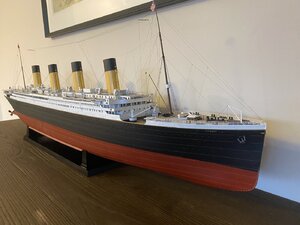 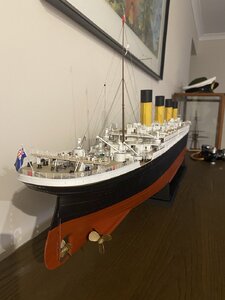 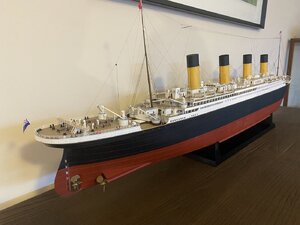 Very clean and accurate work - Congratulation for this great model

Thanks @Uwek its an amazing kit and a joy to build. I’m very tempted to build trumpeters HMS Hood also and very keen to see what their next 1/200 offering would be. Another classic liner like the Lusitania or Queen Mary would be amazing.

Looks like a very realistic build, you just need to add the two people with arms stretched out in nose of ship....ha ha

Have fun with Trumpeters kits, I have several large aircraft in my collection to build at some time down the road.

Thanks for the comments, it’s a beautifully laid out kit which goes together reasonably well with proper prep work.

She’s just been picked up by her new owner this morning, who was overjoyed with the model and will become the pride of his Titanic collection. A little sad to see her go but I rarely keep all the models I build. One day I’ll build a titanic that I’ll keep for myself

Great work! What paints and air brush did you use? And like you I wonder what the next 1/200 offering will be.

I have a badger patriot airbrush kit. For the paints I used tamiya enamels and the hull antifoul was tamiya hull red. I did however paint dark grey highlights over the hull plating after priming with fine white surface primer.

Interesting that you used Tamiya enamels, I know they are coming but didn't know they were available yet.

Tamiya enamels have been around for years and are my usual paint for plastic models.

Sorry to beat a dead horse,but I notice you are from Austraiia,that explains it because Tamiya Enamels are not yet available in USA,only acrylics. I work in a hobby shop and customers are wondering what will replace Testors enamel that is being phased out.

Ah I see. Yes, we have them here and have for quite a time now. I tend to use tamiya and humbrol enamels for spraying, though humbrol need a fair amount of thinner. For my wooden ships I use acrylics as they seem to be more forgiving with brush painting - I don’t airbrush the wooden models.

Depending on what type and era model, some smaller pleasure or work boats made with plywood sides look good painted and airbrushing give nice even coat over large flat sides.

Thanks Atamini, I have to agree with you on Tamiya Acrylics,my paint of choice,as I have been using them since the mid eighties.I also prefer to brush paint wooden ships as I think it gives them a more realistic finish. I tried Humbrol but I didn't like it though I know a lot of people who prefer it.

Thanks Atamini, do you remember the settings that you used to spray the Tamiya enamels?