As I do not have a lathe I have adopted the following option for tapering spars.
For a given dowel diameter, I drilled a series of clearance holes near the edge of a apiece of scrap wood.
The distance from the edge was varied slightly. The edge was planed away at a shallow angle until various sectors
of the holes were exposed. A dowel was spun in a hole wtih minimum exposure and a low angle plane held on the edge of the block.
The plane was moved until it began the shave the dowel, The spinning dowel was gradually pushed into tthe hole.
The process was repeated in holes that exposed progressively more of the dowel cross section but less of the length was pushed through.
The plane was finally replaced by a sanding block.
I found this more effective than planing along the length of the dowel then trying to sand off the flats.
A fairly low speed was maintained with the drill. Do try not to start a fire boy scout style!
In the second picture below the odd angle of the block and the clip holding the plane are only there to pose the photograph 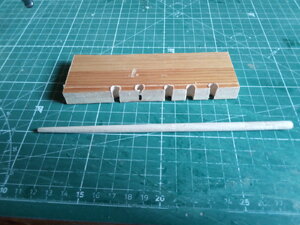 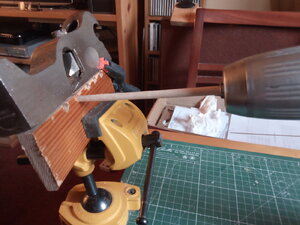