Another drawing
Whilst patiently waiting for better weather, I have once again got out the drawing board in the shape of a badly warped piece of three ply! The present drawing is the sail and general arrangement plan of a large 326-foot-long steel-hulled four-masted barque of 1892. Most of the hard work has now been done now with the drawing of all four masts, and the completion of the jigger mast. The 18 yards now have to be draw in and rigged on the fore, main and mizzen masts. This is more repetitive than difficult. The initial drawing was made more difficult because of the effort required to decipher the badly stained and marked original plan, that had suffered badly over the past 128 years. I was greatly assisted by the Lloyds surveyor report, that detailed the various measurements of masts, spars and rigging, and other relevant information. 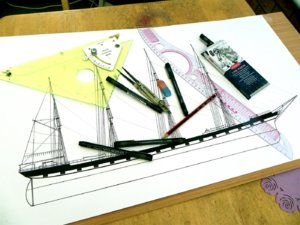 I am not expecting any great interest in this drawing, but I do find it quite relaxing, and a pleasant change from model shipbuilding.
Bob

I have done a lot more work on the four-masted barque plan, and have now completed the sails and rigging on the mizzen and jigger masts. Not a great deal of interest shown in this one, but that is about normal. Again, no model-making done today, on account of the weather - raining again! 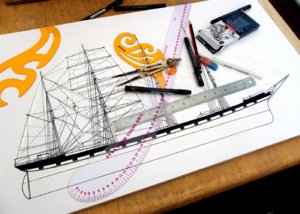 I thought I had completed the mainmast sails and rigging, but when I looked at this image, I saw immediately that I had omitted the lifts on the main upper topsail, main upper t'gallant and main royal yards! No problem, it will only be the work of a few minutes to add them later today.
Bob 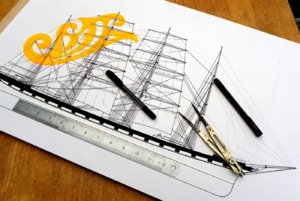 Curious Bob, how do you keep from smearing the pen ink? Or for that matter making unwanted small marks on the paper?

These modern drawing pens dry immediately, and don't smudge! They aren't all that expensive either. As for making mistakes (that I often do), I just paste a bit of paper over it with a cheap glue stick and draw over the top. Or for smaller mistakes, use a white correction pen. The finished drawing is a bit lumpy, but it doesn't matter, because when photographed, the stuck on bits don't show, and the occasional mark can be erased in the computer. All the colouring, and the lettering is added in the computer. It isn't exactly paper, but quite thick 200gsm drawing card! This method usually brings screams of anguish from more skilled draughtsmen, but I always feel that the end justifies the means, and these rather crude methods are the only way I can get a decent plan. It is the same with the models, they look extremely rough duting the building, but it is all covered up.
Bob
Last edited: Mar 19, 2020
P

My years of working professionally at a drawing board started with the first lesson......'cleanliness is next to Godliness'. Use rulers, stencils and curves with the built in lip at the top so any ink can't wick underneath. Bob is correct, many modern pens are just fine for this work if you avoid absorbent paper.

You can just see some of the pencil lines of a staysail showing through the cro'jack (lowest square sail on the mizzen mast). This has since been rubbed out. Also, you can see the faint white strip just above the waterline where the original waterline was that I moved down a bit. This will not show at all after I have coloured than part in grey. The pencilled jibs and staysails on the foremast can be seen, but these will al;so be rubbed out where they are obscured by the square sails on the foremast after I have added them. My next drawing session should see the profile completed. When its is shrunk down to A4 size by phtography, all the errors will shrink as well, and it will look pretty good for book illustration purposes, or model making, as I only build miniatures. I never had drawing lessons, I just picked it up myself, and finding the long curves helped greatly. Also the drawing pens. Years ago, when I tried with those funny pens that had two points that could be adjusted by a screw, I could never get to work properly, but they were fantastic for depositing a great blot of Indian ink on the paper no matter how much I tried to avoid it, so I threw them out and gave up until these modern "fine liners" came out, and I find them fantastic and clean.
Bob
This is one of my powered ship drawings (sailed in it myself for a year).
Bob

Thanks for the explanation Bob. Surprisingly, I use similar techniques in the computer but for other purposes!! Good stuff.

I have now completed the sail plan of the four-masted barque (Well, I thought I had - but just noticed that I have missed off the dolphin striker, but only the work of a few seconds to add it!
Bob 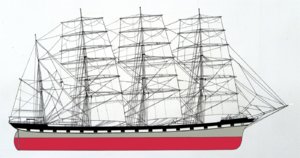 Awesome drawings! Have you thought about creating prints of your drawings and selling them?

Very few people are interested! This is not my imagination. I started drawing them as illustrations for my downloads and books that are quite successful, but to sell them on their own is a non-starter. I have had several on FineartAmerica for sale for some time with zero result - not a single sale! Take the four-masted barque above. 244 have looked and 7 have clicked their like buttons, but not a single viewer has even asked which ship it is! The problem is, that I do not deal with warships, and anything loaded with guns and missiles always seems to be far more popular than trading vessels, whose only aim is peacful trading, despite the fact that life aboard them is infinitely more varied and interesting than ships of war, although very few would agree with me!
Bob

And here we have Fine Art America -

Shop for artwork by Robert Wilson. Purchase canvas prints, framed prints, tapestries, posters, greeting cards, and more. I am a retired merchant seaman, and my hobby is handbuilding fine scale models of merchant ships. I also do a lot of nautical writing, and drawing up of ship plans, of...
fineartamerica.com
You must log in or register to reply here.
Share:
Facebook Twitter Reddit Pinterest Tumblr Email Link
Top