This subject was touched in my Bellona build-log so I thought I would post the results of my research here. The subject has been debated on a German Forum and also in the Vasa Forum in detail, though what I have to say hasn't been generally accepted, most of the scholars taking part or observing the debates conclude that there is some truth behind it.

In the 1990s I built my first model of a Dutch Two-decker. It was built to 1:50th scale and after the hull had been completed I sold it. In 2013 I felt like building a Dutch ship again but as I had already built one in 1:50th scale I didn't want to repeat that, so I decided to copy the so-called Hohenzollernmodel in life-size, i.e. 1:22nd scale.

While studying pictures of the historic model I noticed something: 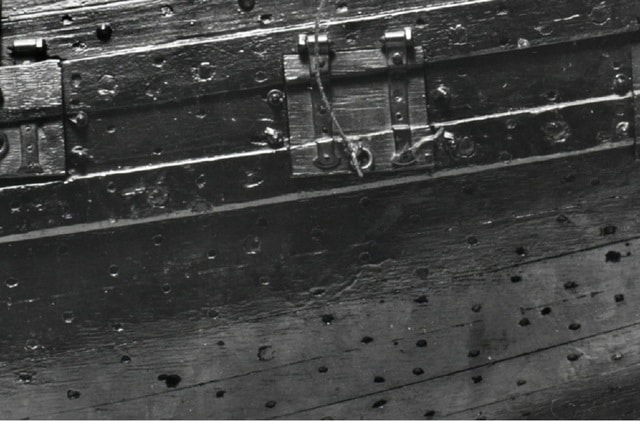 The gunports on the Hohenzollernmodel seem to be perfectly square. If this is the case then the frames forming the sides of the ports must have a certain degree of tilt. In the book about the Hohenzollernmodel "Der Holländische Zweidecker" by Heinrich Winter is a set of plans in which the gunports are also perfectly square and an attempt to add the frames to this plan ended like this: 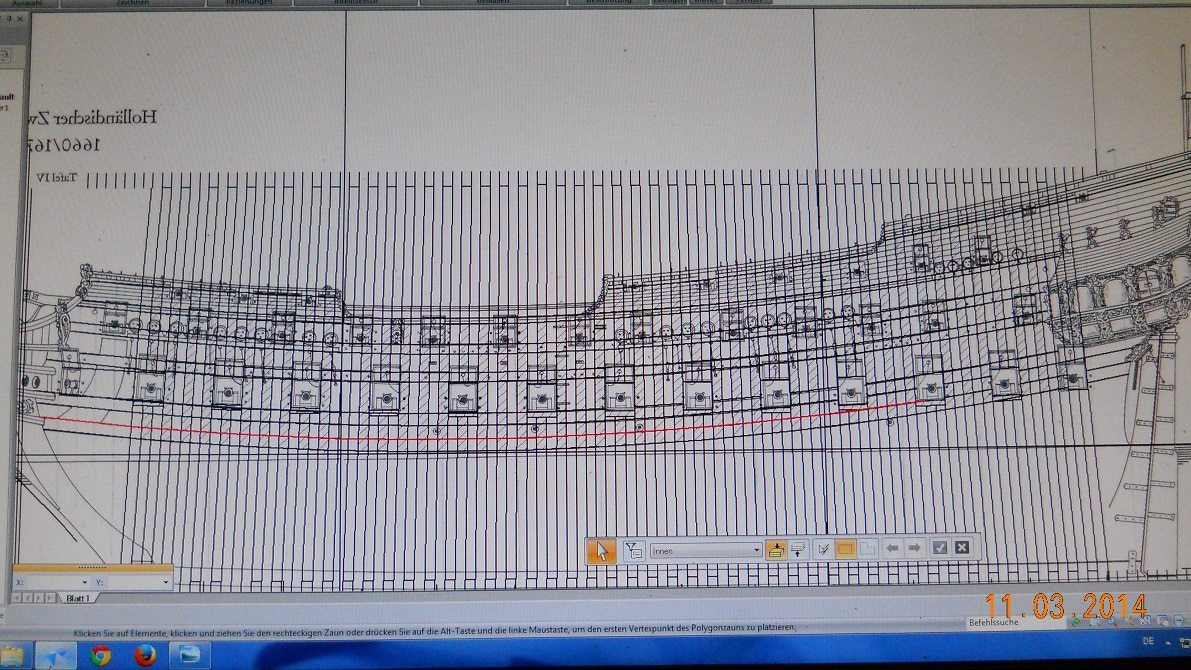 The Frames tilt! This is not the result of any distortion due to the camera-angle or anything like that, this is a plan-view - the frames tilt!

We can observe the same on the Vasa. To cut a long story short - there is no need to go into details that were debated in the other fora - but we have here a plan of the treenails that hold the hull-planks to the frames of the Vasa:

And we see: the frames are tilted. I got this plan from Fred Hocker from the Vasa-museum and have permission to distribute it in the net. My observations are by no means anything new. The Vasa was raised in 1961 so even then it was noticed that the frames are not perfectly upright as people might expect them to be. My observations were though that the same can be seen on the Hohenzollernmodel which means that large warships were still being built Shell-first on yards in Amsterdam even in 1660 - 1670.

We need to bear in mind that the frames of shell-first built ships are not one complete built-up unit like on frame-first built ships. On Shell-first ships the frames are individual pieces that are bolted to the inside of the hull planking without even being bolted to each other. The Dutch call These pieces "Inhouden" which lierally translates into "The pieces between the Skins".

The biggest advantage is though: the pieces don't need to be faired or camfered to fit snugly against the inside of the hull like on a frame-first ship. The frame pieces can be perfectly square in cross-section as seen here on Vasa which makes construction much easier. 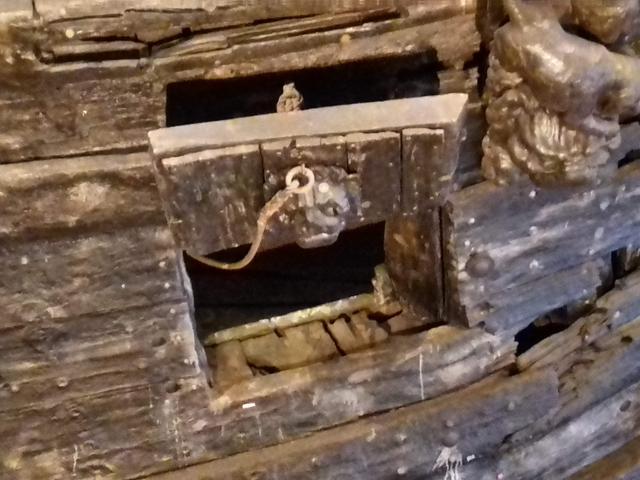 Some historians have argued that even on Shell first built ships the frames are camfered so they can be installed perfectly upright, but then I ask: what for? There is NO reason to do so, it would only make things much more difficult. My observation is that every Shell-first built ship had tilted Frames and thus also completely square gunports.

I won't go into detail about how some historians reacted to this but some of the debates were extremely unpleasant - two historans terminated their correspondance.

Maarten,that is how I installed my gunports on the Ontario,also easier to install them and no mess with rhomboid gunports and gunport lids.

This is exactly the way I figured they should be

Wow, fascinating research. Another piece of shipbuilding history to file away.

Yes, this is how it was done on my Hohenzollernmodel. All gunports are perfectly square - or rather: slightly rectangular.

In the following image I have highlighted the vertical centerline of the cherubs in yellow. To the left the gunports have been highlighted in blue. You can see that the blue lines actually follow the frames beneath the hull planking, have a tilt to the left. Compare this to the mizzen mast in the top left corner. 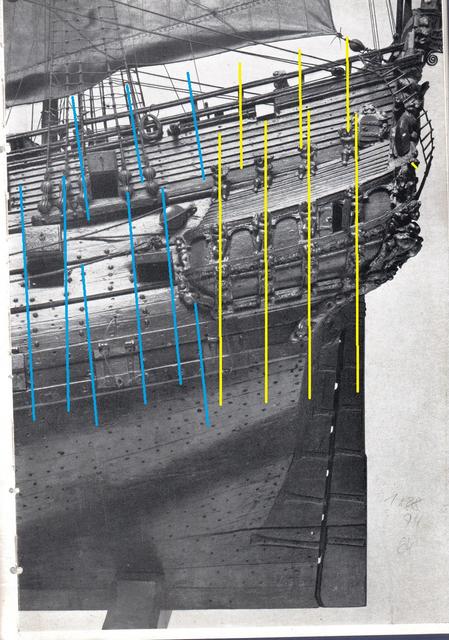 The same pattern can be seen on Vasa, some forty years older than the ship the Hohenzollernmodel portraits: 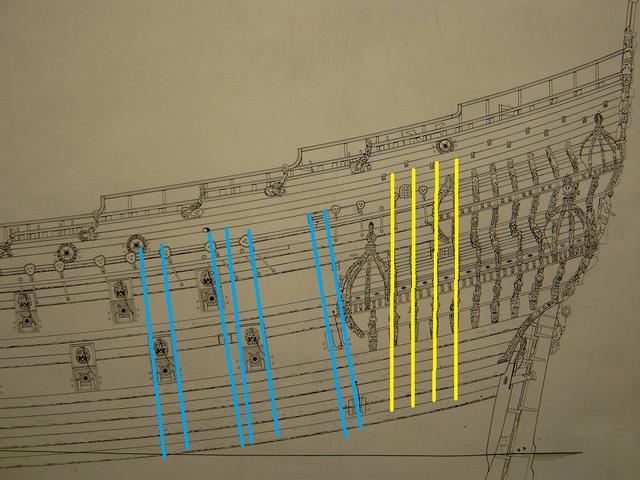 Here's a plan view of the inside of the hull fragment of the Batavia: You can see that the gunport is (more or less) square and that the frames form the gunport's sides: 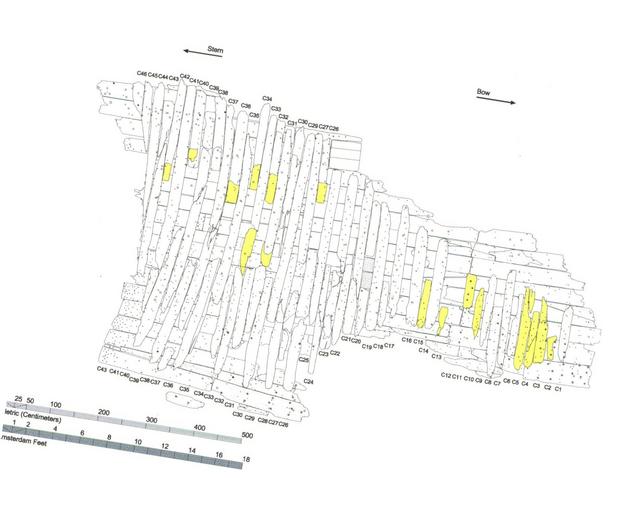 Very interesting.
After my current build I plan to build a fluyt. This means the drawings of this build from ab hoving and cor emke for this ship are most probably incorrect unless the vessel is build by a yard in Rotterdam or Zeeland where they used frames first methode.

As Witsen published his work in Amsterdam in 1671 we can assume that ships were still being built shell-first there at that time. Van Ijk published his work in Delft in 1697 so ships were being built frame first in Delft at that time. I believe that the large model in storage at the STAM-Museum in Gent was built frame first, I have been told in Rotterdam, my guess is that the STAM-Model is about ten years younger than the Hohenzollernmodel. I have never seen the model myself though: 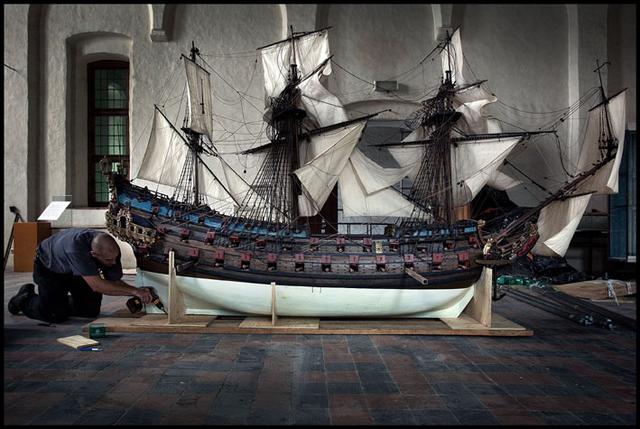 A Frenchman named Arnoud, who visited English and Dutch shipyards on an assignment for Admiral Colbert, stated that ships were still being built shell first in the Netherlands in 1670.

Wendy van Duivenvoorde writes: " It is not known exactly when Dutch shipbuilders brought the frame based construction method, described by Van Ijk, into their shipyards, but it must have been some time after 1650 and became established by the early eighteenth century in all major Dutch shipyards."

I know nothing about the fluyt, but if Cor Emke or Ab Hoving drew plans of a shell-first built ship with diamond-shaped ports, I would say they are wrong. Frame-first construction came about in the Mediterranean around 800 - 1000 A.D. It then made ist way up the coast towards North-western Europe. The English were far quicker in gaining it, even The Mary Rose (1511) was built Frame first.