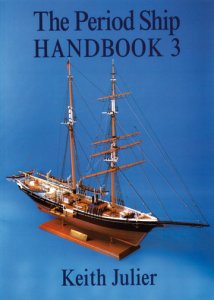 From the simple to the sophisticated, a detailed look at the making of ten new static model ship projects which demonstrate the transition from kits to scratch building. Chapters dedicated to the building of each vessel lead the model maker through the various phases of construction, advising on both the methods and procedures required to build models up to exhibition standard. The range of subjects extends from the simple Bounty's Jolly Boat to HMS Bounty itself. The huge San Felipe is representative of the Spanish warship of the late 17th century, and the 1:48 scale Viola takes the modeller into the fascinating world of early twentieth century American whaling. A later chapter summarises rigging terminology and modelling techniques - that part of the building process that unjustifiably deters many from delving into the most satisfying hobby of static model sailing ships.


Contents: (the producer´s name and scale added by myself)