My final small ship modeling project I am posting about was a typical Roman merchantman from the height of the empire in the 3rd century.
In 202 B.C. Rome conquered Carthage and gained control of the entire Mediterranean coast which they ruled for the next 600 years. During this period, maritime trade blossomed, and the Romans were no slouches as ship builders. There is a written record of a Roman ship 180' long, 45' beam, and 43.5 ' depth, a ship size not seen again until the 16th century. The existence of large ships was confirmed by the discovery of a Roman lead anchor stock, 13.5 ' long weighing 3.5 tons. This obviously came off a very large ship and also indicates the Romans had cordage and mechanical devices for handling such a large anchor.
A number of Roman wrecks have been examined by nautical archaeologists, and for the hull below the waterline, the only part of all the wrecks still remaining, a fair amount is known about construction methods, dimensions, and shape. Given the long maritime history and the number of Roman artifacts still in existence, I assumed there would be no problem finding depictions of typical merchantmen from this period showing the appearance above the waterline. I was mistaken. There are very few representations available, and the best is a stone relief, shown below, found in the ancient Roman port of Portus. Fortunately it shows good details of the rigging, hull, deck furniture and steering oars; however, there was obviously a lot of artistic license in the carving. 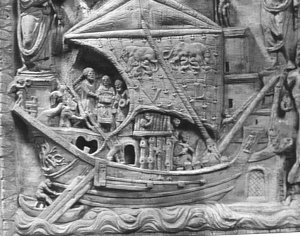 Further searching uncovered a conceptual lines plan of the Portus ship on the web site www.cherini.eu. These plans, shown below, were used as the basis for my model. Their author, and his basis for the dimensions, is unknown, as is the scale in the drawing. When the plan was printed, the cabin height was 1”. Assuming a full size height of 6', the deck length corresponded to 43.4', which was in good accord with the known dimensions of small merchantmen from this era. Assigning this length to the deck gave a scale of the printed plan of 1/72, and I doubled this for my model which was built at a scale of 1/36. 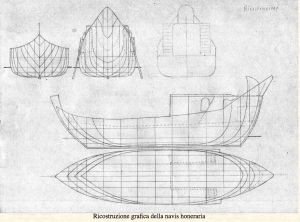 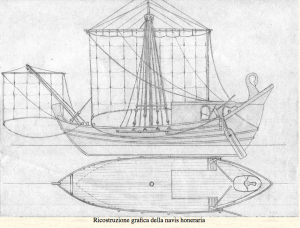 The model was constructed by the plank on bulkhead method with double planking in basswood and then cherry. Decks were birch ply. Because the plans looked to be preliminary rather than finished, I first cut the keel piece and bulkheads from poster board to check for fairness (1st model photo). When this looked OK, I went ahead with the actual build. The second model photo below shows the skeleton with battens attached to define planking bands. The aft bulkheads were extended to support the cabin planking. The photo sequence that follows shows construction of the deck and deck furniture, the final model and close ups from forward and aft. Rigging, based on a a best guess, is depicted in the final photo. More information on this project can be found in an article in the Nautical Research Journal, Vol. 60, Spring 2015, page 3. 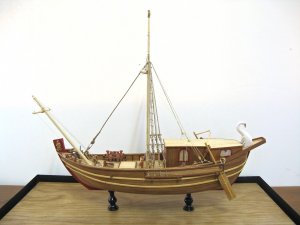 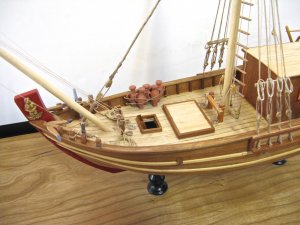 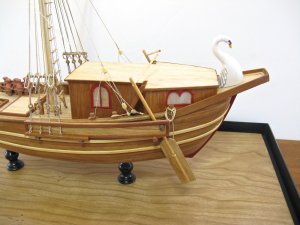 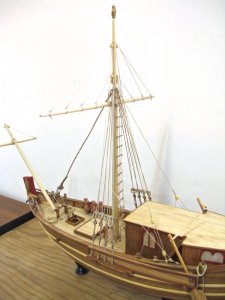