Bob - as I continue to research a project worthy of a build log in your Maritime History forum, I eagerly await a new tale of the sea.
S

The field is endless when considering merchant ships, all sizes from a few tons to quarter of a million. All shapes and colours, with many and various histories attached to them. But few modellers like making merchant steamers. Maybe American ship Flying Enterprise. I wonder how many have even heard of it, but it was world news once upon a time - Enter it in a Google search if you have never heard of it!
Bob 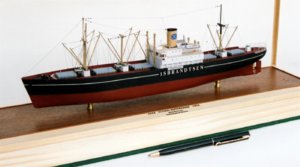 As usual, you lead us to a good story. I am surprised they were not able to shift/move cargo and correct the list. I assume they must have had bad flooding. Thanks!!

Happy Birthday Mike! I hope you have a wonderful birthday day full of joy happiness and obviously gifts (maybe new motorcycle.....or model of it )!! many more years to come!

mrshanks said:
As usual, you lead us to a good story. I am surprised they were not able to shift/move cargo and correct the list. I assume they must have had bad flooding. Thanks!!
Click to expand...

With the ship that far over, it must have been thosuands of tons of shifted cargo, and impossible to move back on a ship of that size. I followed it with fascination at the time, watching it on my granparents 12 inch black and white TV set, as they laboriosly tried to get the ship to safety. I remember the cine film taken from the circling aircraft with captain Carlson and the mate of the tug standing on the side of the funnel before jumping off. Then the bows rising slowly from the sea, and then disappearing beneath the waves. Even then I was wanting to go to sea, but never considered the navy, I was only interested in merchant ships in which the greatest adventures were to be found. Going to war never really appealed to me, but got 13 months in the Falklands in 1982/83 because the government took over my ship. I didn't have to go, but where my ship went, I felt I must go! Eight years after Flying Enterprise, I qualified and went to sea in early 1961 on a similar class of ship. Flying Enterprise was an American C2, whilst my first ship was an American-built C3.
Bob
M

mrshanks said:
Bob - as I continue to research a project worthy of a build log in your Maritime History forum, I eagerly await a new tale of the sea.
Click to expand...

It seems something I said 3 months ago is still ongoing today ....

Shipbuilder Bob we have not heard from you in a while ... What seas are you traveling?

This site is concerned primarily with the miniature ship models of Robert and Christine Wilson. This activity is a hobby, following retirement.