Happy Birthday, Gerhard!! Many happier and healthier years to come!

Thank you, stll workimg on the drawings for the Doctor, first parts are printed.
Base Plate and first piles in 3D Construction 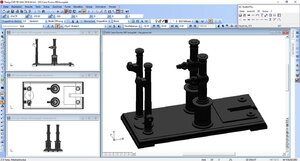 As I wrote, I`m currently working on a 1:50 measured model of the USS CAIRO. Planned is to build her with a full working steam engine, the build started around 2 years ago. So there will be a lot of older photos, I`ve made during the build. I`v made about 200 pics of the build so far, but had to make a longer break from model building, so I have to make a complete estart with it. The following posts will show how far I was until today, newer stuff will follow. But I do hve one issue, by a major computer crash I`ve lost almost all of the Bob Hill plans I had. I do kow the great build made by Gene Bodnar, and some other builds, but cannot find the plans anywhere in the world wide web anymore! SO, if anyone has the plans, PLEASE give me some PM, THANK YOU!!

Dave Stevens (Lumberyard) said:
I believe the only use of the Doctor engine which is not really an "engine" it was a pump and it was to pump river water into the boilers. I need to dig out my files on this and see if I can find that info for you.
Click to expand...

If I may help: the "doctor" was not just a pump; it was indeed an auxiliary engine independent of the main engine that served two purposes: provide water to the boilers when they were running low and as a secondary use, to run a small fire pump when the occasion arose. So the auxiliary engine you found is almost certainly the same as the doctor. It was considered expensive to use the main engine to power the small feedwater pump. Prior to the doctor, a boat had to pull up at a wharf, disconnect the paddle wheel, and run its engine rapidly without load just to run the small feedwater pump until the boilers were filled. This was a nuisance, and impacted schedules and cost.

The word doctor was coined because it was thought to "cure the ills of the steamboat engine," and it came into general use on the larger classes of riverboats around 1850.

My source is Hunter, Steamboats on the Western Rivers.