I've started working on the 1:600 Heller model of the USS Forrestal. The Forrestal was the first carrier built by the United States after WWII. It was also the first "super carrier" being just over 1,000' long and over 60,000 tons. It was also the first US carrier constructed with an angled flight deck that among other things permitted the launching of four planes at a time. The Heller kit represents the Forrestal as built in the mid 1950s and included 8 - 5" guns placed on four sponsons at the corners of the hull keeping the deck clear for four deck edge elevators to move aircraft from the hangar deck to the flight deck. My father was a member of the pre commissioning crew that manned the Forrestal during her acceptance trials in late 1954 and 1955. He also served on the Forrestal during her first Med cruise. I have decided to model the ship without her normal complement of aircraft and instead show her with a single C-130 which conducted trials testing the feasibility of using the transport for C.O.D. duty. The trial was successful but it was decided that the C-130 was just too big for regular delivery of supplies. So I will be ordering a 1:600 scale C-130 from Shapeways that uses 3D printing to manufacture highly detailed miniatures. So far I have begun construction of the hull and island that sits on the starboard side of the flight deck. The kit is split at the waterline but I haven't decided whether I will complete the model with a full hull or as a waterline model on a simulated water base. 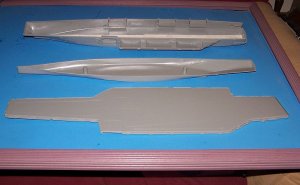 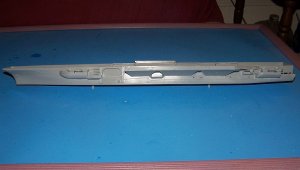 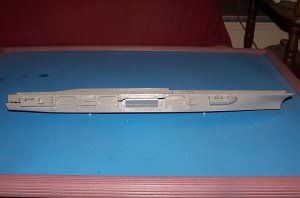 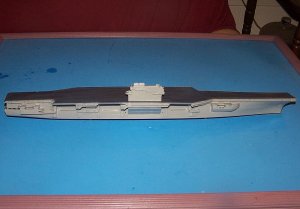 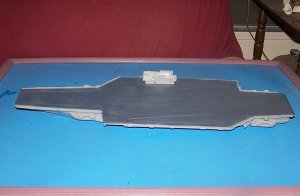 The C-130 I ordered from Shapeways has arrived. It is of a modern C-130 with the extended fuselage so I will have to remove about 10 ft. from behind the wing. It comes in translucent plastic which I hope will take paint. here it is on the deck of the Forrestal. 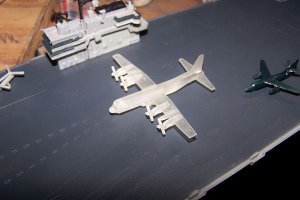 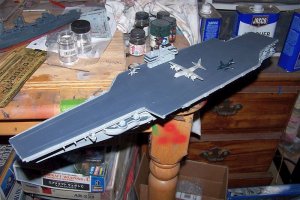 Here's the modified C-130 along with one the way it came. I removed the underwing tanks clipped the wingspan down to 132' and shortened the fuselage making the length 99 ft plus or minus. 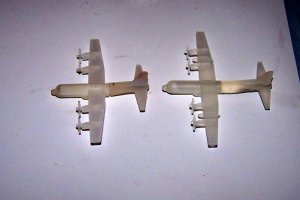 I'm getting close to the end of this build. Only a few detail parts to add and some painting to do. The Heller decals worked better than I expected. The large #59 on the aft deck was left off as it appears from the images of the event that it had been painted out to avoid confusing the pilot of the C-130 on his landing approach. There were no other aircraft on the flight deck no any ground handling equipment that I could see, but I will look again closely. 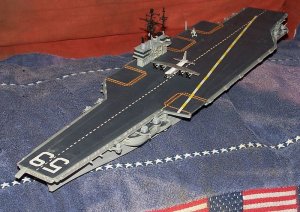 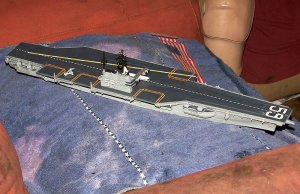 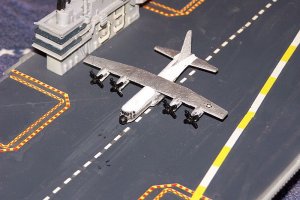 Here's part of an archive file from the Navy describing the event.

The aircraft, a KC-130F refueler transport (BuNo 149798), on loan from the U.S. Marines, was delivered on 8 October. Lockheed's only modifications to the original plane included installing a smaller nose-landing gear orifice, an improved anti-skid braking system, and removal of the underwing refueling pods. "The big worry was whether we could meet the maximum sink rate of nine feet per second," Flatley said. As it turned out, the Navy was amazed to find they were able to better this mark by a substantial margin.

In addition to Flatley, the crew consisted of Lt.Cmdr. W.W. Stovall, copilot; ADR-1 E.F. Brennan, flight engineer; and Lockheed engineering flight test pilot Ted H. Limmer, Jr. The initial sea-born landings on 30 October 1963 were made into a 40-knot wind. Altogether, the crew successfully negotiated 29 touch-and-go landings, 21 unarrested full-stop landings, and 21 unassisted takeoffs at gross weights of 85,000 pounds up to 121,000 pounds. At 85,000 pounds, the KC-130F came to a complete stop within 267 feet, about twice the aircraft's wing span! The Navy was delighted to discover that even with a maximum payload, the plane used only 745 feet for takeoff and 460 feet for landing roll. The short landing roll resulted from close coordination between Flatley and Jerry Daugherty, the carrier's landing signal officer. Daugherty, later to become a captain and assigned to the Naval Air Systems Command, gave Flatley an engine "chop" while still three or four feet off the deck.

Here's the finished project. I added the antennae last as they are very vulnerable to breakage. 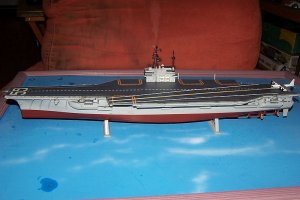 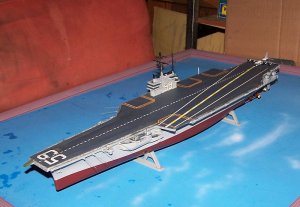 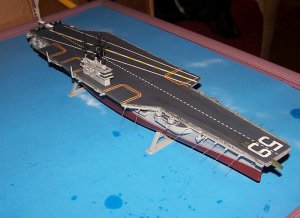 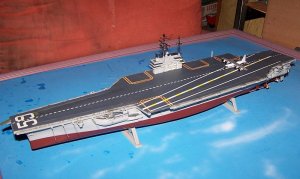 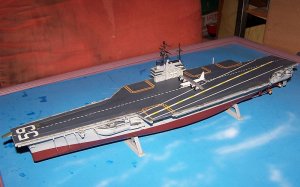 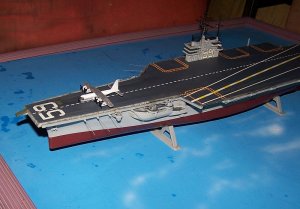 My Uncle served on the Forrestal.

I just bought one. I love the work you have done here sir.