Javier, neat work as usual, likes the color of the sails.

I advance with the rig... 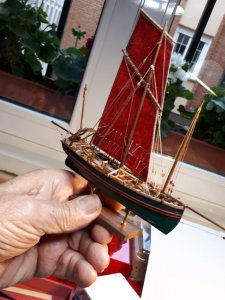 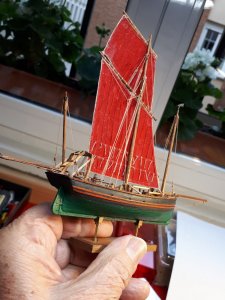 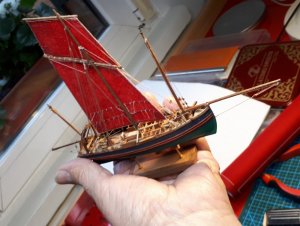 I finished the herring herring of Fécamp. Since I did not do it in the beginning, I'm going to do a bit of an introduction at the end, because, in my opinion, it still enriches a model.

Historically, herring has been of major importance in the economies of the countries bordering the North Sea and the English Channel. Herring spines were found in the Neolithic Danish necropolis, and one of the reasons for the creation of the Hansa was by and to facilitate its trade. As a food, it has played a major role because it is a cheap fish given its abundance, high in fat and protein and suitable for different preservation techniques: salting, pickling, smoking, drying, etc. ., facilitating its transport. In the Middle Ages, it even served as a means of payment.

For centuries, herring has been caught with the same fishing gear: a set of driftnets, like gillnets, which were launched in the same way until the disappearance of the fishing. the sail: the boat, in the twilight tide, as it sailed with a reduced sail and tailwind, slowly slid the net into the current, regulating under the indications of the pattern the depth to which it rested. Once the net was stretched, the boat was put in "drome" and allowed to drift slowly, staying oriented to the wind thanks to the tape that served as an aerial rudder. They then armed the "garden" on deck, the name they gave to the drawers of movable screens and castors on the bow of the mainmast, which facilitated the collection of fishing, and they rested at night. The nets were loaded at dawn and, once the fish were collected, they were stored in the corresponding creeks while the boat returned to sail to haul the product from the harbor.

Depending on the fishing location, Shetland Islands east of La Mancha, the fish was stored without further handling to be sold again or put in brine for preservation in case of delay. the arrival at the port. The North Sea and English Channel are narrow basins, with short and agitated waves, which is very tiring for a "drome" navigation, practically dry of canvas. To reduce the pitch and roll that were amplified by the high rigging, lowered the masts on the deck while pulling the nets, the largest first, and then, when paired, the foresail. To carry out this operation, these boats had guides to fly the masts in their descent, as well as a portico raised at the stern to receive the slaughtered masts leaving the deck cleared. The use of driftnets has resulted in a clasic hull, with well-filled shapes at the front and a marked water outlet at the rear, the main frame being located 2/5 of its length from the bow.

The model represents a good size lugger, with a rig with three masts, as could be found in Fécamp between 1850 and 1880, a length of about 25 m. Shortly after, during the last decades of the 19th century, the luggages were disarmed and resold for cabotage, especially in Brittany, and the construction of a new type of herringbone, ketch-dandy or dundee, was launched, with a lenght of 32 m. 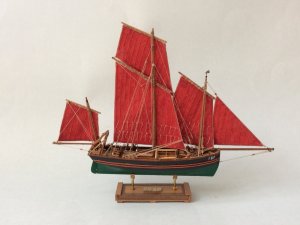 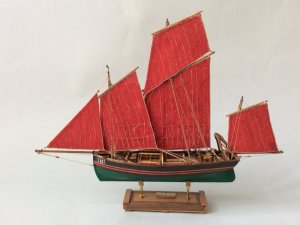 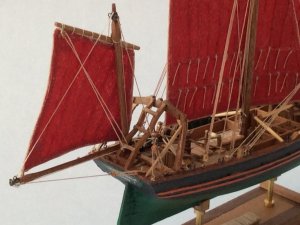 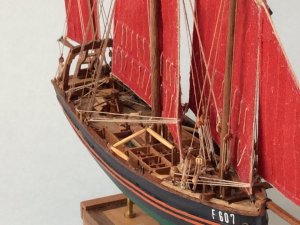 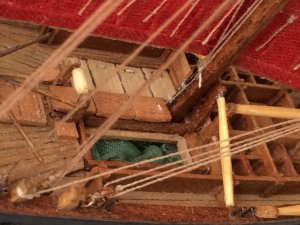 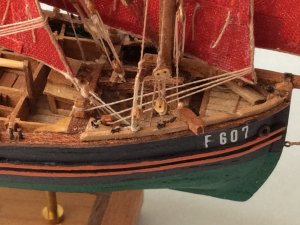 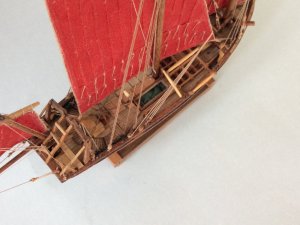 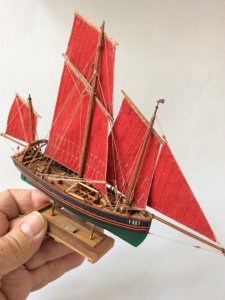 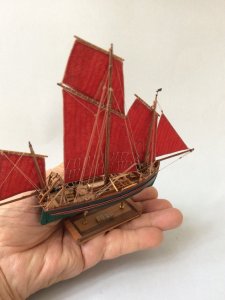 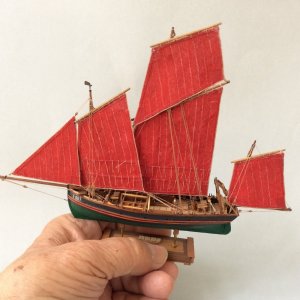 What will be your next project in miniatures?

Translations from Spain by Google: Hello partner and happy to greet you ... your work as always impeccable, a jewel more for the collection ... a hug Liberto
S

A masterful work of art.

Truly amazing to see that much detail at that scale.