Yep. That is part of it.
When I was a teenager, now let me think...about 40 years ago, I played around with optic fibres.
I plan to revisit those days and see what other things I can bring to the table.

Swabbie said:
Yep. That is part of it.
When I was a teenager, now let me think...about 40 years ago, I played around with optic fibres.
I plan to revisit those days and see what other things I can bring to the table.
Click to expand...

Discovered today that the optic fibre will arrive from China _ a month from now. I hate it when they say the item is local, but wait, because it comes from China.

Swabbie said:
Discovered today that the optic fibre will arrive from China _ a month from now. I hate it when they say the item is local, but wait, because it comes from China.
Click to expand...

Last night, and today, I spent time painting torpedoes. I noticed that some colours did not like the smooth plastic, for the paint spread out ultra-thin. Several coats needed to be applied. Next time I will lightly sand the plastic so more pigment gets trapped and held to the surface.

The torpedoes come in four sets of three (fused together). Nearly every modeller of this kit elected to follow the instructions to the letter. I noticed by doing so, the rear starboard wall and its instrumentation gets blocked by the upper rack of torpedoes (the bottom rack, of three, is not used). The racks can handle 16 torpedoes, the kit has 12. Decided to cut one torpedo from the set of three, which leaves two torpedoes for the bottom rack. As a result, I am using the bottom and centre racks, leaving the top one free. This empty space now provides a clearer view of the starboard wall. The two spare torpedoes will be used in a simulation of being fired and just leaving the torpedo tubes.

Used a single insulated wire to imitate a shaft and lever for each torpedo tube. This will indicate the mechanical firing lever. Actually, the wire can be turned by the lever. This could actually be used as a contact switch for triggering sound effects of a torpedo being fired . I won't be using that idea on this model, for it will be sealed in a display box. 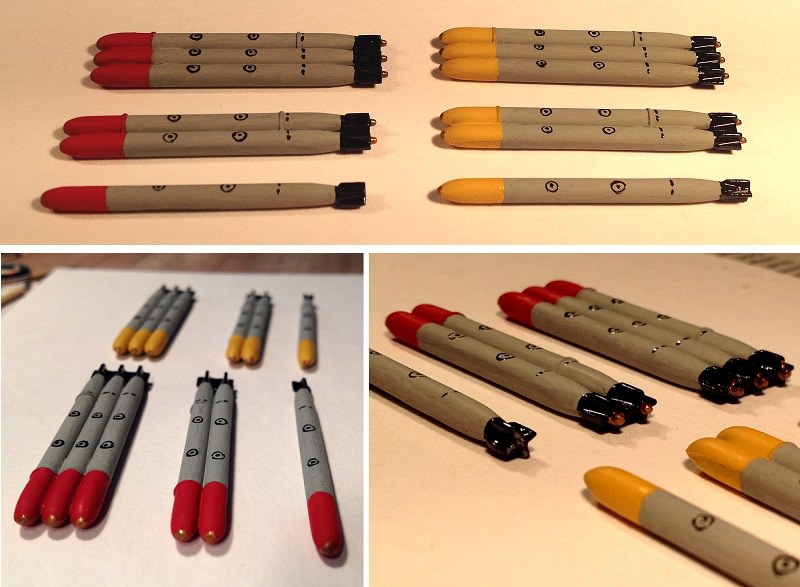 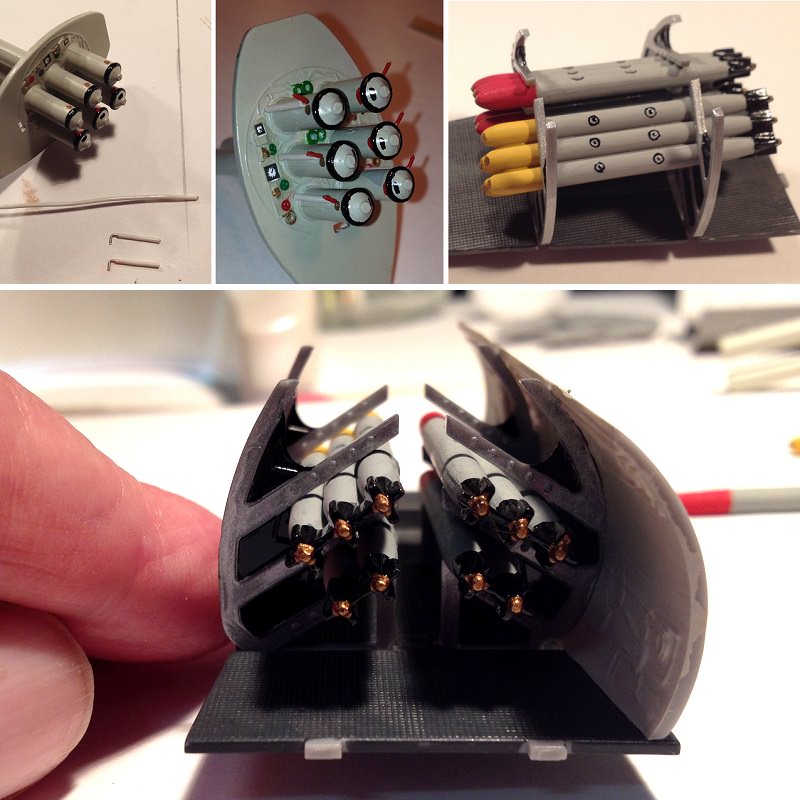 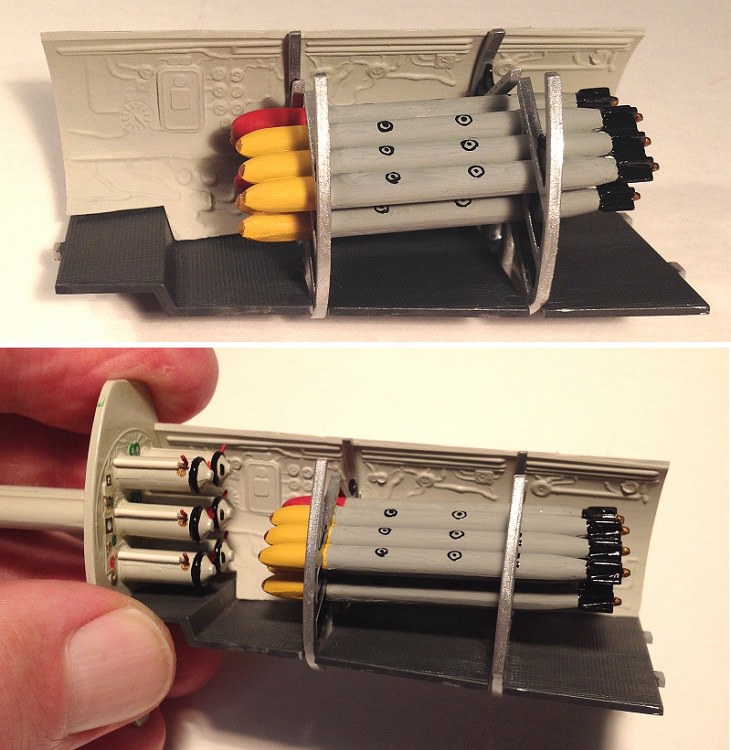 G'day Peter
Why are there red and yellow tipped torpedoes? Is it becsuse of different poundage of explosive?
Happymodeling
Greg

Peglegreg said:
G'day Peter
Why are there red and yellow tipped torpedoes? Is it becsuse of different poundage of explosive?
Happymodeling
Greg
Click to expand...

The colours various for different reasons. I chose red and yellow for the model.
They often colour coded the nose to indicate what type of torpedo design is to be used. Besides the normal straight running torpedo, there were (from memory):
Here is a link for WW2 German torpedo types: https://en.wikipedia.org/wiki/List_of_World_War_II_torpedoes_of_Germany 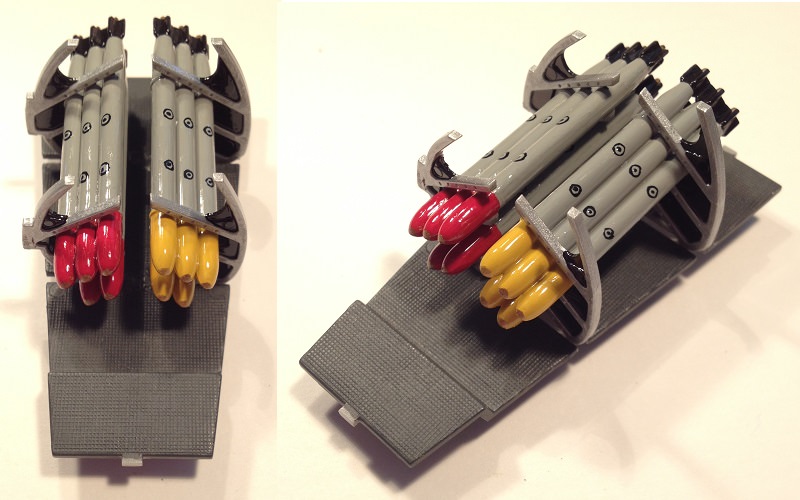 Worked on painting the torpedo compartment wall. Surprisingly the kit instructions do not show decals for this wall. Perhaps they realized that the torpedoes would obscure itl. But this model has the wall showing; so now I have to paint what I can. Made a rough plan of colours to use on the plastic protrusions. 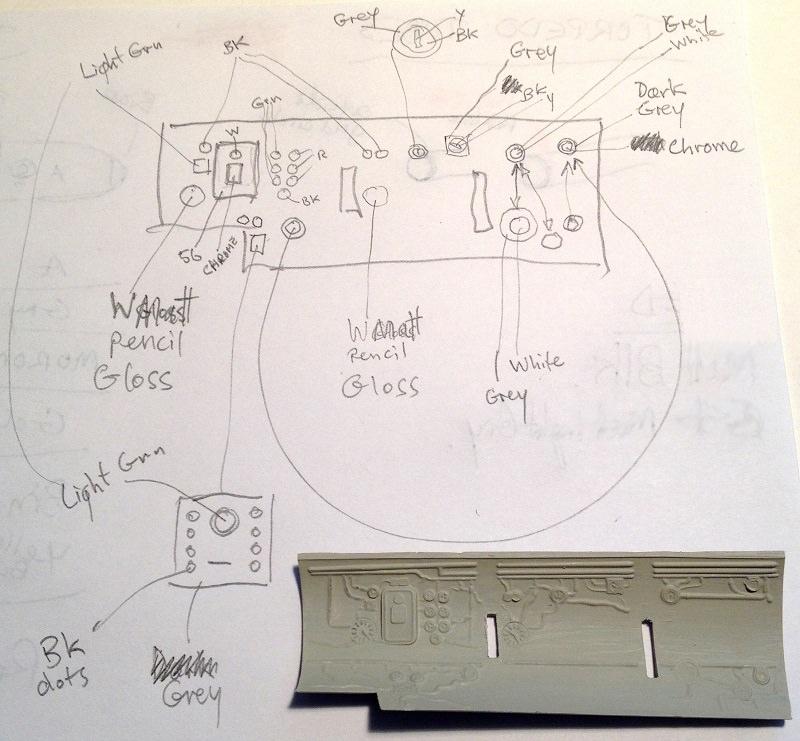 Thought of a way to make the larger dials more realistic. The idea is to paint the dial surface a matt white so that pencil marks would be easier to apply. Then paint the white dial with a few coats of clear gloss to imitate glass. I think it worked out well. 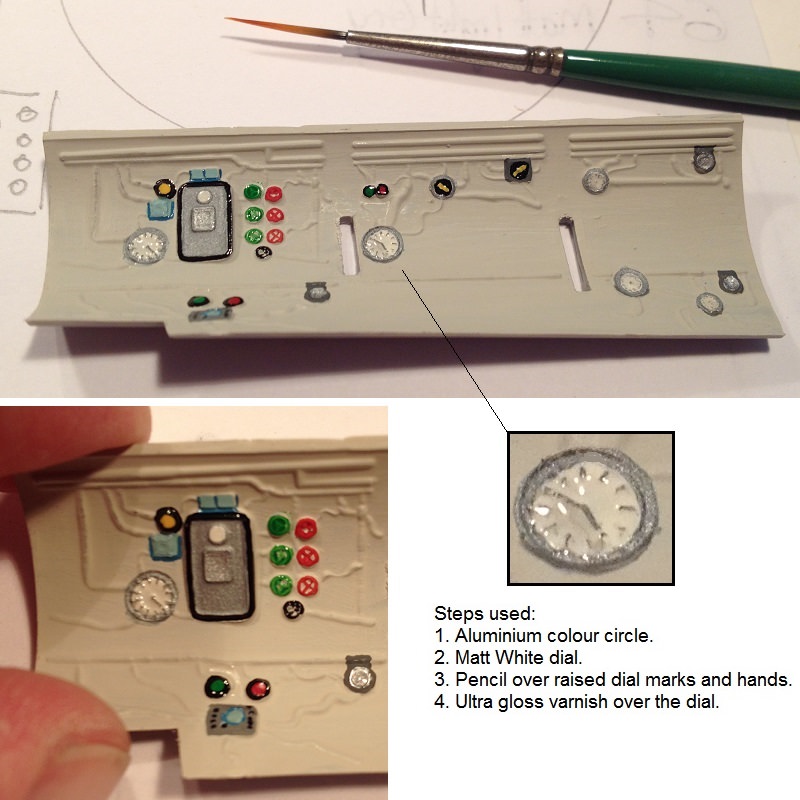 Really enjoyed painting these small bits. My confidence in doing so increased as I progressed. My hand stayed more relaxed and steadier. In that relaxed state I became more aware of what was needed to be done. I feel that my skills will improve as I proceed along on this build.

G'day Peter
I don't like to put a spanner in your works, but I don't think WWII uboat had 'lights' as such in the control sections.
I can recall in old WWII movies that the control indicators were electro magnetic coloured metal 'lights'. 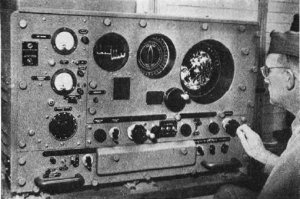 This is a radar control board. Note the black indicators.
This make sense, because the chances of a light blowing up is very high especially if they were being attacked by depth charges. The constant shaking would blow the filaments too easily. Also I doubt if the used RED at all. The emergency running lights were red so the crew wouldn't know if a red indicator was on or not.
I would say they would used yellow and and a pale green or blue. As these colours would show up in the red emergency lighting.
Happymodeling
Greg

@Peglegreg , thank you for that information. That may have be the case at the time (WW2).

Instrumentation lighting would have been minimal purely to save more energy for the batteries. If every gauge throughout the sub was lit, quite a few amps would be continually drawn. These days they mainly use digital instrumentation with the traditional 'suck and blow' gauges on the side in case of electrical failure.

In regards to the red light, I believe the German navy (WW2) did use red lights in the control room and conning tower; especially when they were about to surface in the night and need to go into immediate action.

The following photo shows the US Becuna (1942). They may have added the red lights after the war, but I doubt it. 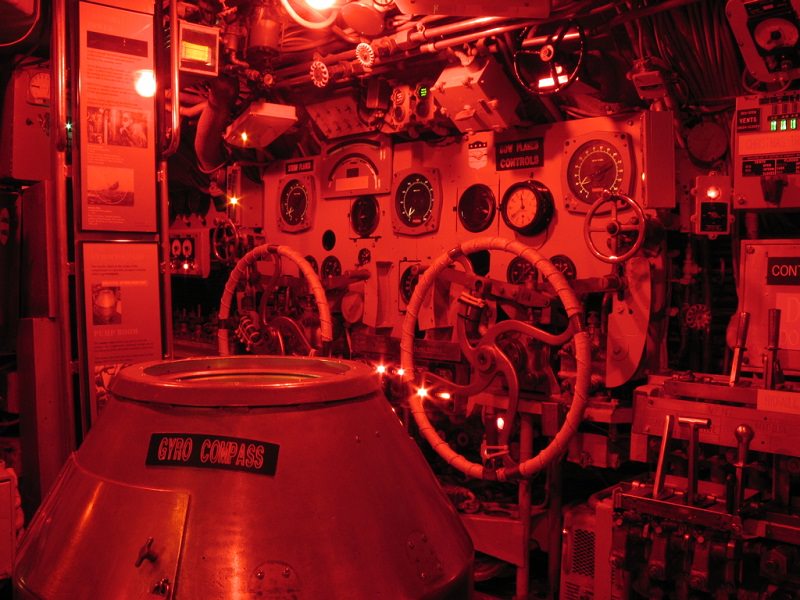 I really cannot say what is true or not. I was not going to light up instrument gauges as such, since the small scale makes that extremely difficult. But I will use 'artist's privileged' on my model .

I just found in a german forum one information, from somebody who is specialist of german U-Boote pre 1945.
There was no regulation or written requirement of the german navy (Kriegsmarine Vorschriften) to use, install etc. of red lights. They had only the request to reduce from 110 Volt to 90 volt, so there is a less possibilitiy of damages during attack by mines. Means the Germans used the normal white light.
This guy is speculating, that this „redLight“ is an invention of holiywood to make these scenes more dramatic......interesting, or?

It looks like I'm a been brainwashed by Hollywood. ​
Sorry for giving you the wrong information mate. My guff up!

Well guys, I am learning all the time. It never ceases. Thank you.
Red lights, white lights, red goggles, dimmed lights, green-blue lights, or whatever. I am sticking with the dramatic Hollywood impressions for this model.

Holywood invented Drakula too,now everybody looking for him in Transylvania Lol

Was given an enlarged image of the XXI plans, and discovered something under the torpedo floor . 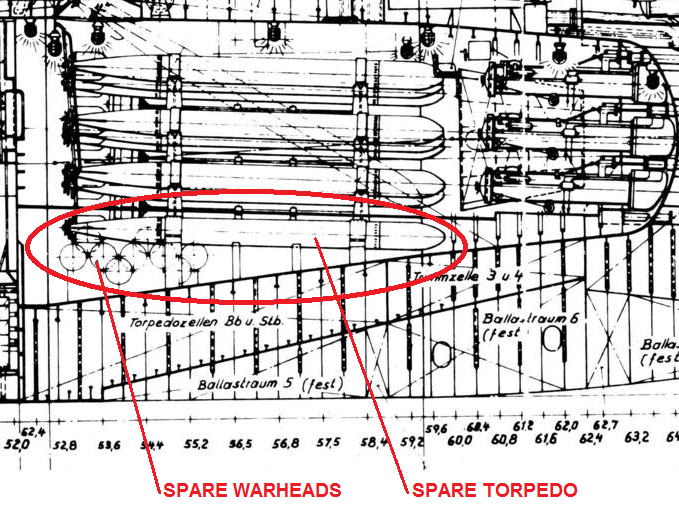 Look at all those lamps at the top

And the model cutaway allows a visual.
Of course there is nothing stopping me from cutting away an even larger visual area. 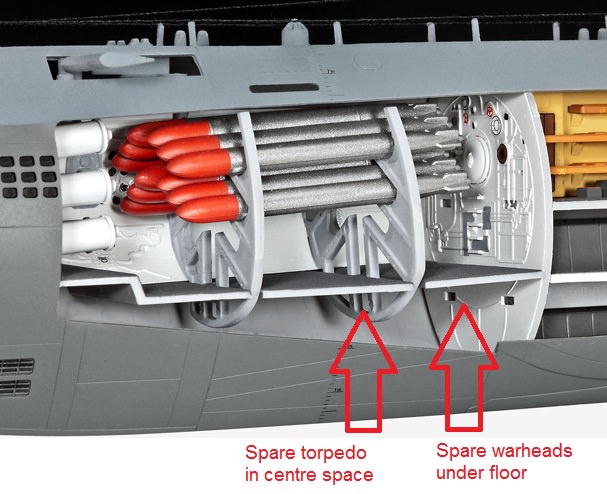 Uh oh, you know what this means . . . more coloured warheads
Soon it will be so bright in the torpedo room the crew will have to wear shades .

Will I ever get to the other compartments

I like. These open models where you can see whats inside,in a wooden ship model a hell lot of work to build up everything inside.

zoly99sask said:
I like. These open models where you can see whats inside,in a wooden ship model a hell lot of work to build up everything inside.
Click to expand...

Sometimes a modeller can go overboard, which I hope not to experience (maybe I already have but nobody told me any different). In the same vane, it requires a certain amount of awareness to know when enough is enough. Some experts would even say, to stop just short of enough, to leave the observer wanting more .

Made a spare torpedo from the kit template frame. 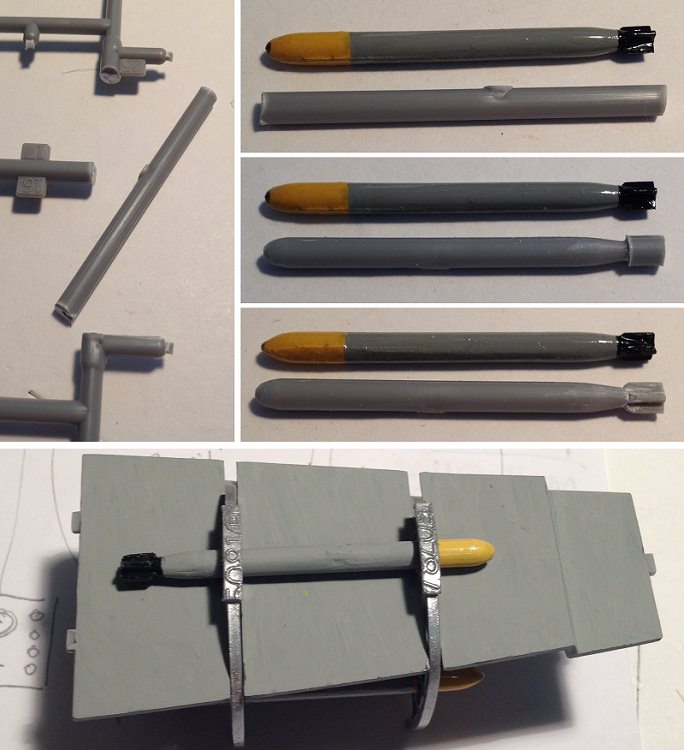 Quickly figured out what parts of the wall is visible after the torpedoes and tubes are installed.
Used single strand wire to add extra electrical conduit within these visible areas. 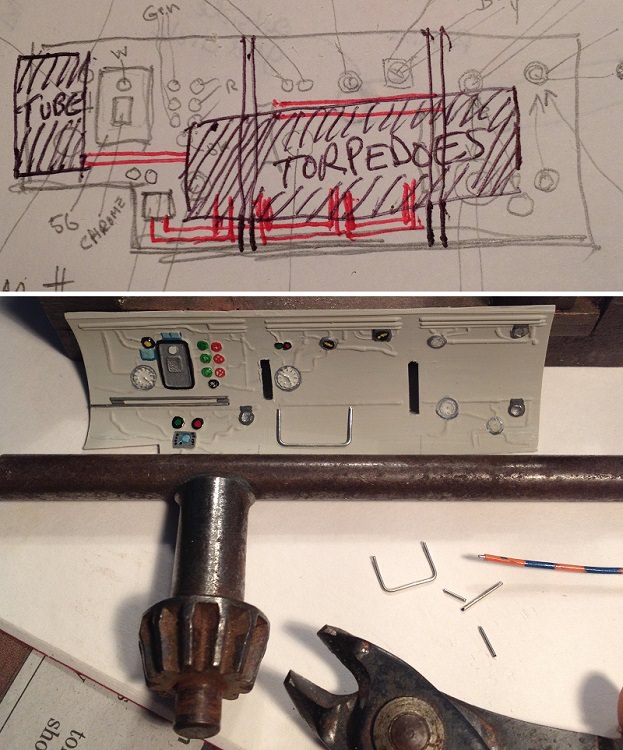 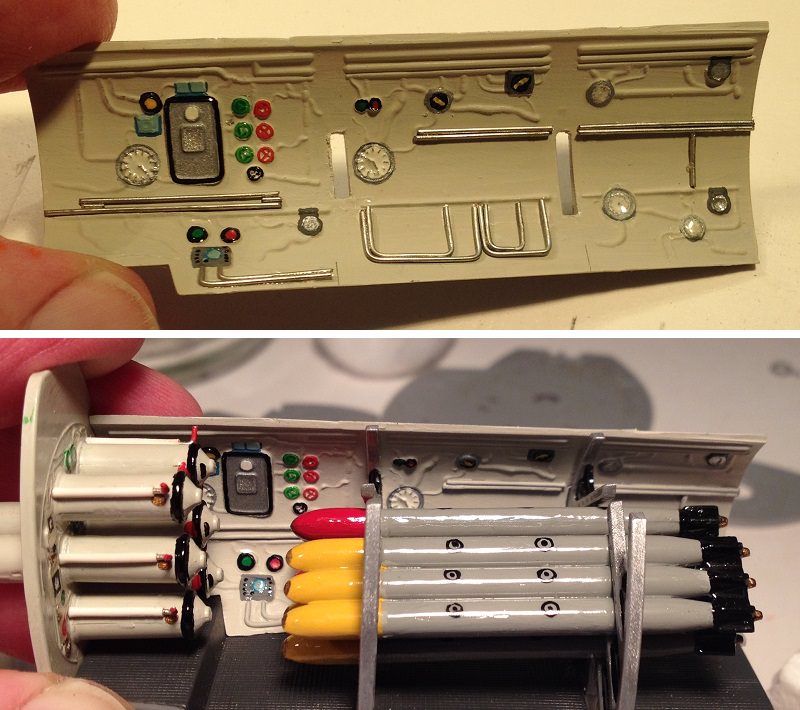 The spare torpedo is installed under the floor.
Bottom photo show the extra conduit seen under the torpedoes. 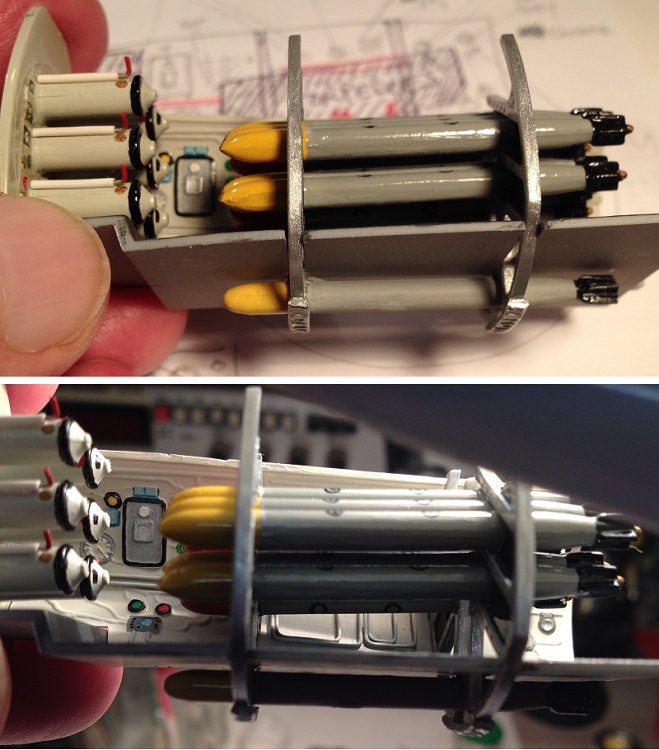 G'day Peter
There one thing that I don't understand? Well that's not right, there are oodles of things I don't understand.
Well anyway, getting back to this model, why is there a torpedo under the floor and how does the crew access it?
Happymodeling
Greg

@Peglegreg
The U 2540 museum has taken out the torpedo racks and used the space for an information centre. The floor plates are visible. 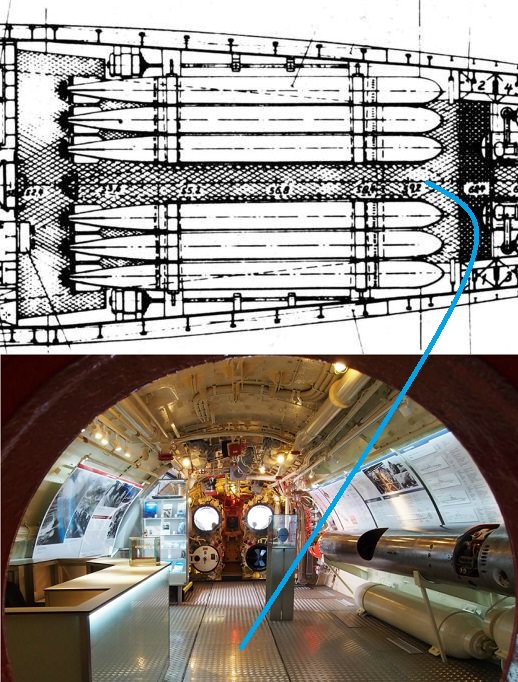