That is quite remarkable detail at that scale size. Nice !!

Bottom centre: Glued this figurine in situ, leaning against the bunkers. In this way I had created both a support for the bunkers and a guide for aligning the bunker nipples when I assemble the sections. 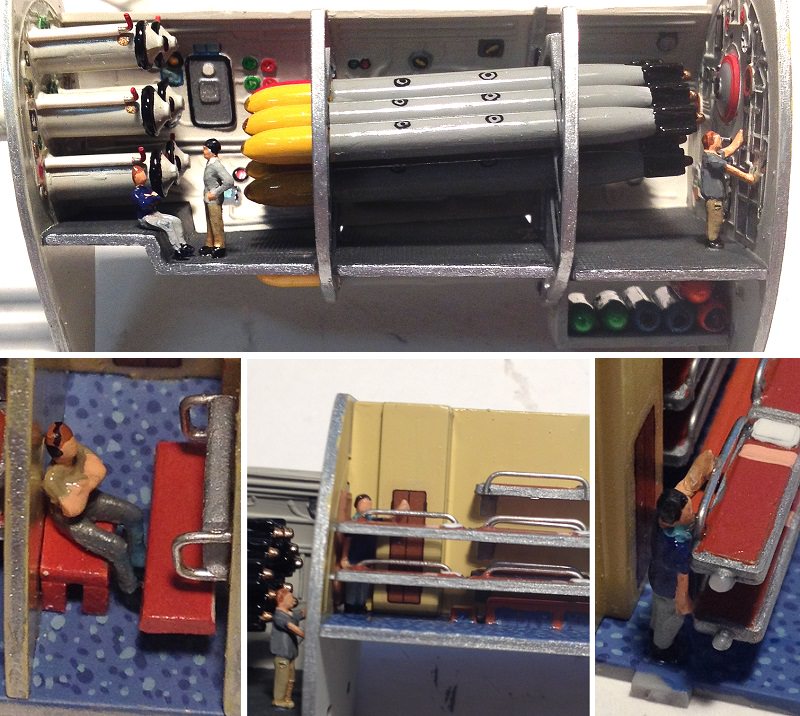 I wish to create a mini-diorama in the battery compartment. A dramatic scene could be based on a dangerous situation is of a compromised battery: where leaking sulphuric acid reacts with salt water to release chlorine gas. This gas has a distinct yellow-green colour to it. The diorama is about a crewman investigating battery damage. 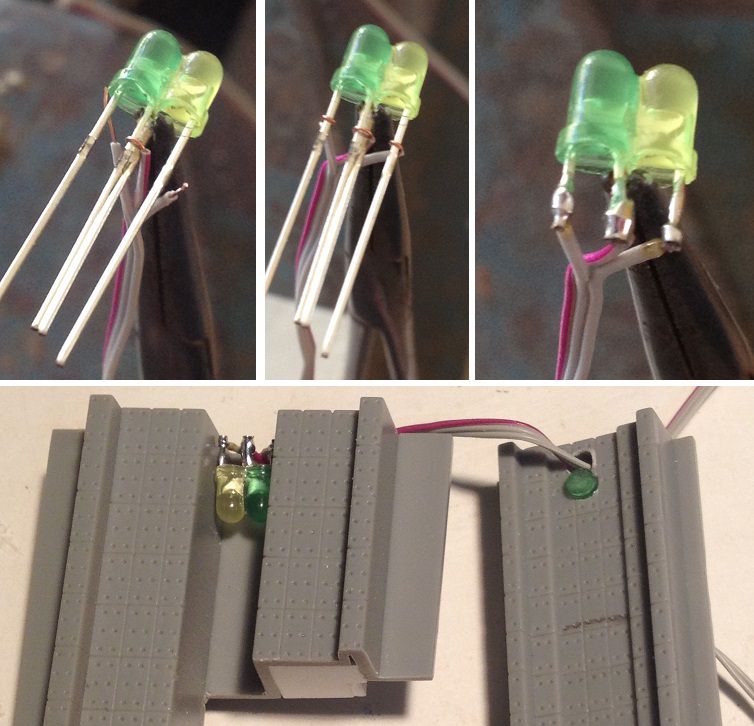 Glued and soldered two LEDs together which share a common cathode lead (earth). Had to file some of the plastic away first. Then soldered leads to the them. Installed the LEDs to the top battery bank. They are hidden, and hoping the two colour lighs will meld together. If not, I may have to use a medium that will aid in the blending. Anyway, much of the projected outcome won't be known until everything is in place. Fine-tuning will be inevitable for such a cramped dark space as the battery compartment. 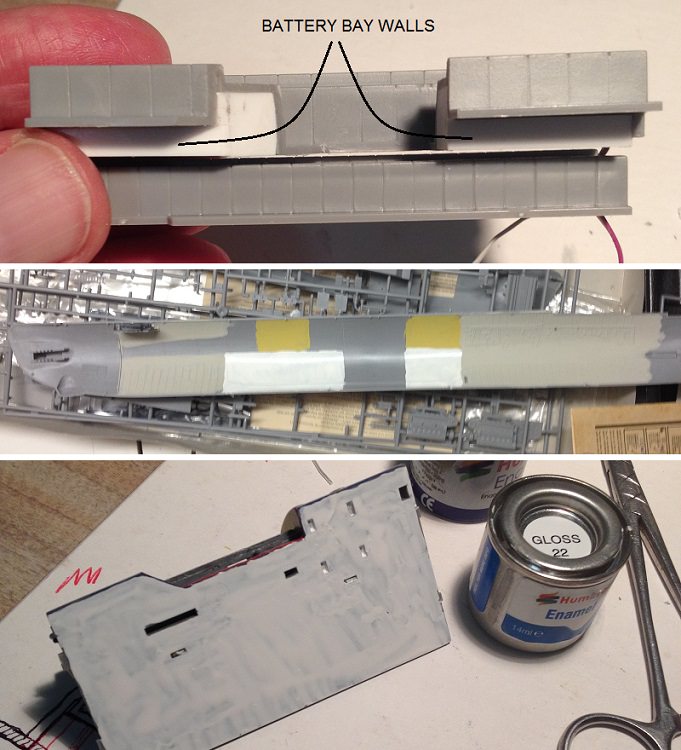 While playing around with the battery banks I realised that there is a wall missing. It is part of the battery bay. Added more styrene.
To help increase light onto the subject, the back wall (hull) and ceiling got a coat of white gloss paint. Will add another coat tomorrow.

Altered one of the figurines to look as it he is creeping along the low central gangway, while holding a torch. Optic fibre is used for the torch. Eventually the LED and fibre will be blacked out, only having the light coming out of the torch end. Drilling into the LED to have the fibre inserted, and wrapping in foil really intensified the light through the fibre. It should look okay in situ. 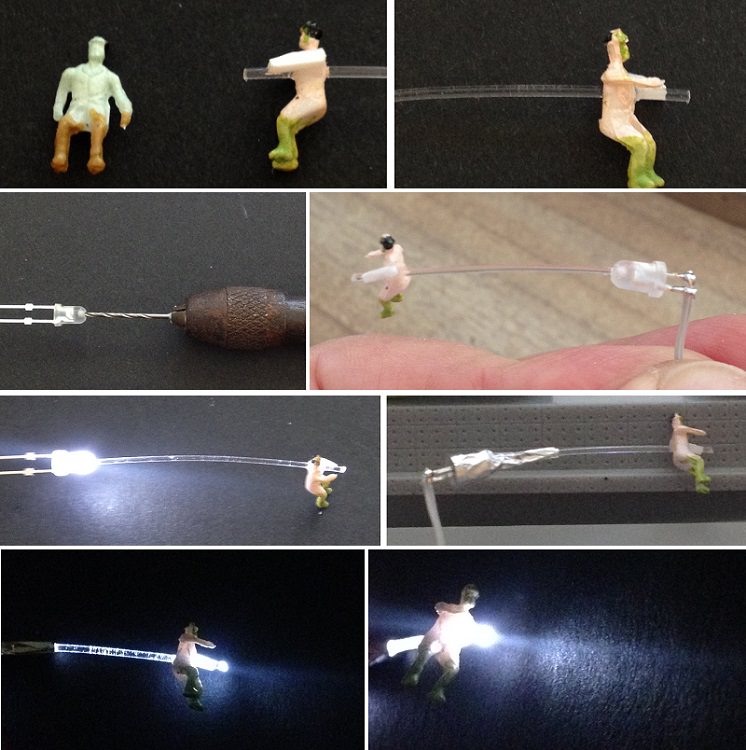 Very ingenious I must say !

Today, I focused on the bulkhead between Control and Wardroom. Decided to have the Captain stepping through the bulkhead door. Chopped two figurines to swap legs, and chopped an arm to re-position it. 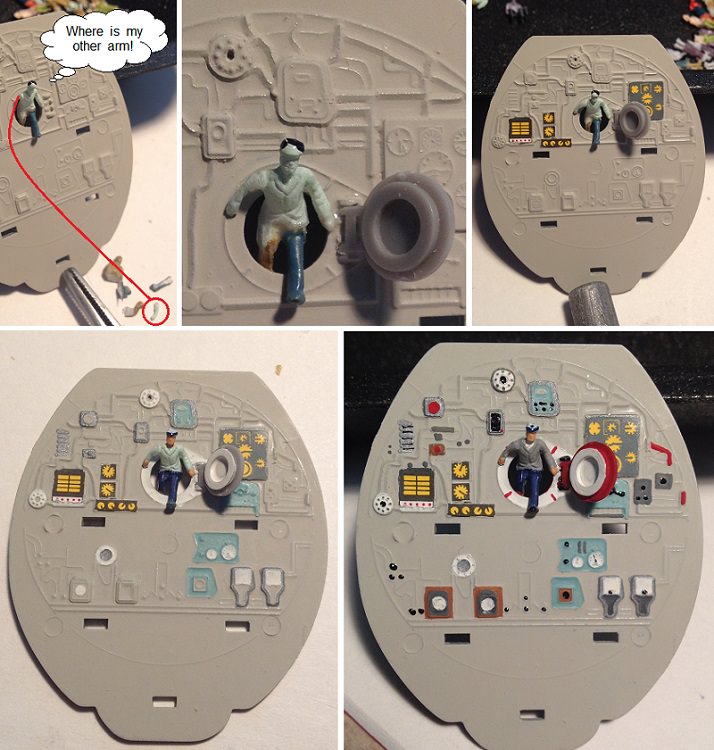 Used a few decals, and again I wished I didn't. You may not notice it but my hand is getting steadier. I am relearning how to manipulate the brush and paint consistency to improve the outcome. 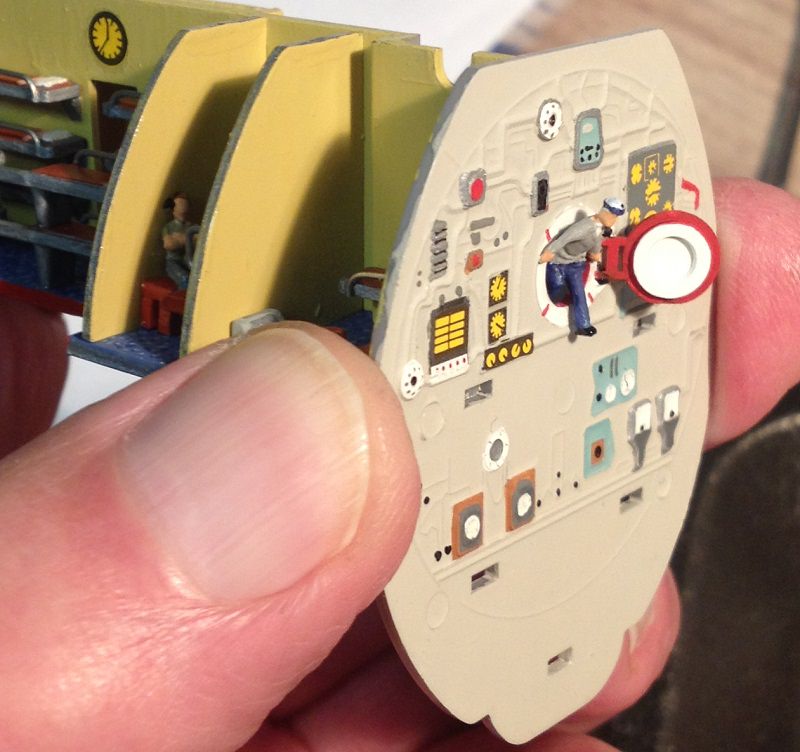 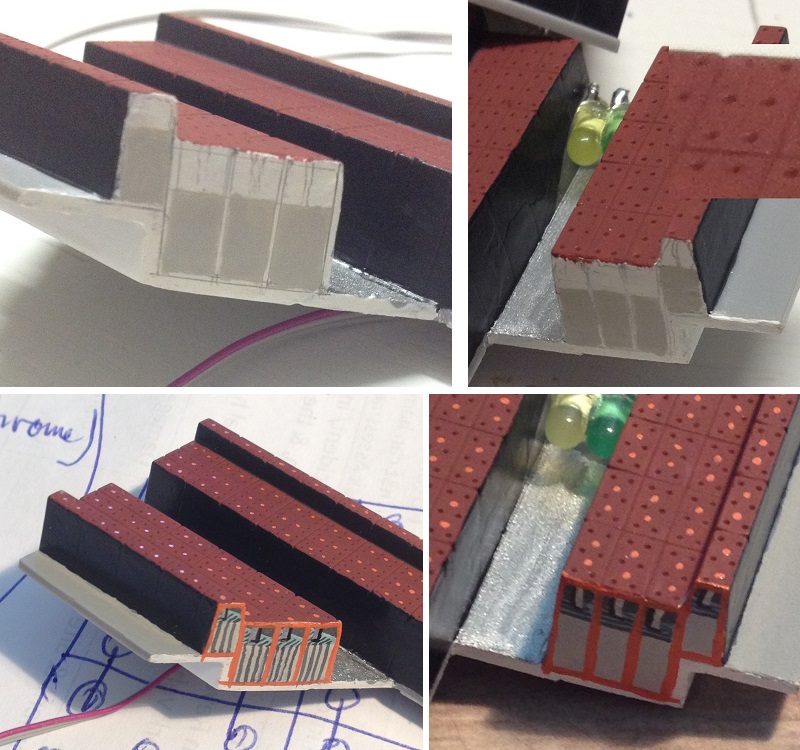 The cutaway does show what the batteries look like, to some extent. Decided against painting, or installing mini connecting leads. It looks already busy as is.

This section of compartments is complete (three done, four to go). The first section, the conning tower, is still not finished. Hoping to have that complete tomorrow. 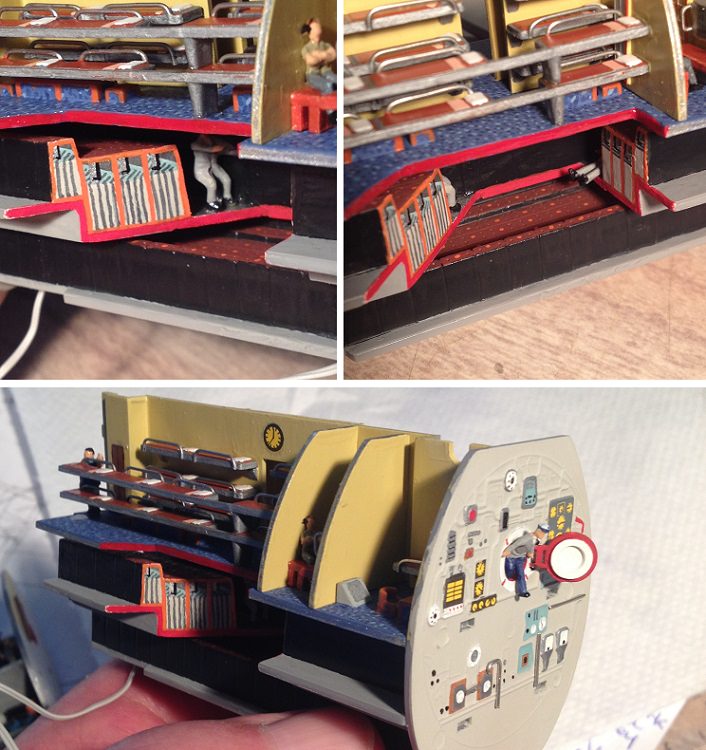 As you can see, there is some sort of drama depicted in the battery room. Besides leaking chlorine gas, there appears to be a man overcome by the gas. 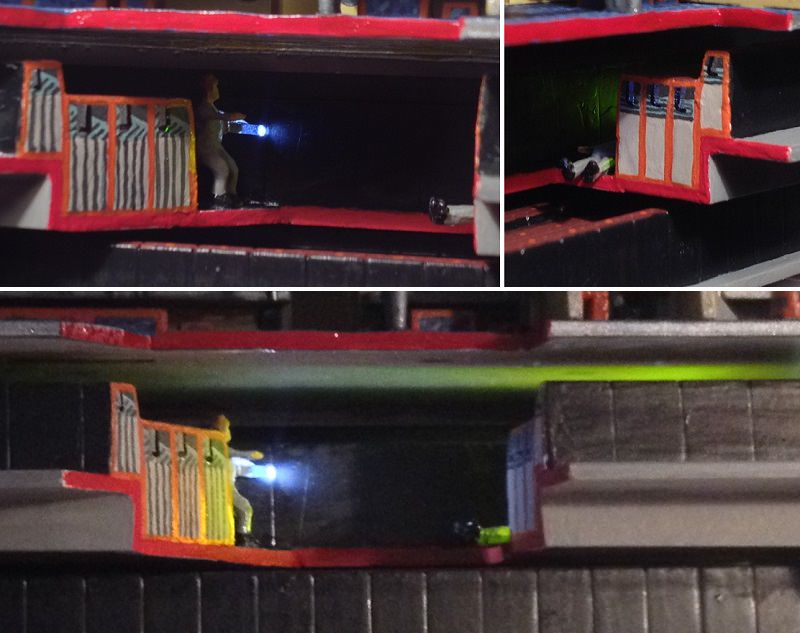 You have a creative imagination Peter and the skills to make it happen. I must watch the film Das Boot again they had a gas leak on that Sub,

Thank you for your kind words.

Aginvicta said:
You have a creative imagination Peter and the skills to make it happen. I must watch the film Das Boot again they had a gas leak on that Sub,

Thank you Andy for complement.
Yes that is a fabulous movie. Watched that one a few times. Can't believe that the actors remade the whole movie in English. The red headed guy never spoke English before and you can tell.
Yes they did have chlorine gas emissions (seawater reacting with sulfuric acid) after receiving heavy damage.

This is the big model they also used

and here you can find a research for photos of the models
https://www.google.at/search?q=bava...Mu7nbAhWG2qQKHVMGAWQQiR4IlAE&biw=1920&bih=900

Sorry Peter for high-jacking the topic.....I thought this could be interesting for you and some members....

Been busy on another ship, a ship I believe would not be suited here. A total ad-lib scratch build space ship . Guess what, I really am enjoying it. Why? Because there is not one single rule, laws of physics, expectation, ought or should-be attached to it. It is absolute liberation. Pure creativity. I believe every modeller should give it a go. It unleashes the imagination and the child within _ to run amuck without judgement.

Anyway, I forgot to add a photo to the last update. Nothing new here, just another angle of perception. 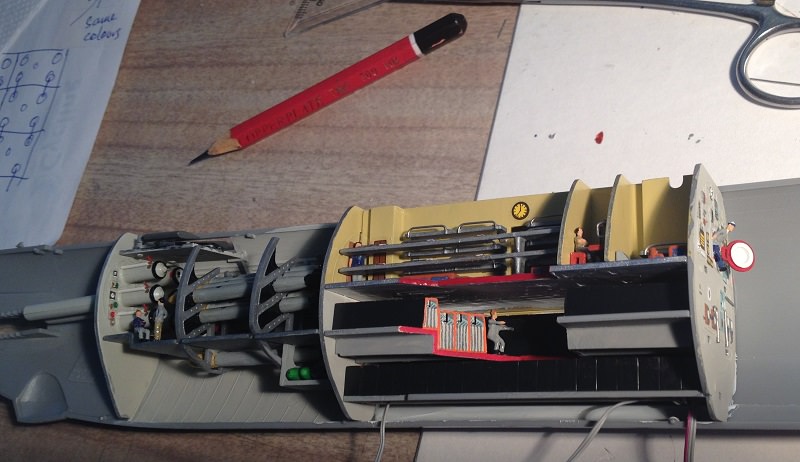 , thank you Zoltan. Will do.

Well me ship maties, it is a sad day indeed.

For a few days now I have been fiddling around trying to make the turret guns look as if they were firing. Used the optic fibre idea, as previously mentioned in another thread. I cut the barrels off, drilled holes to insert pointed optic fibers. All went well until I tried to attach LEDs to the ends of the fibres. Man, it's a small space in that conning tower. After much manipulation of LED leads I finally got LEDs to contact the fibre ends. I think I fractured one fibre; its pointed end could not be well illuminated.

, so I got them to work using my multimeter to power the LEDs, but the meter's battery was running low. So I used a 5 volt source, which means that the LEDs need a resistor to bring the voltage down to 2-3 volts. So I added the resistors. Then I did something out of character for me. I connected the 5 volts to the wrong end of the resistor. In other words, I added 5 volts to the LEDs, I think they lasted 1/10 of a second. Blown the LEDs.

Oh well, that was a short lived experiment. This one blow up in my face due to unawareness. The application originally worked. I was going to have the gun ends flashing. At this moment I am tempted to forego this application, because I really have to replace the fibres in a way that won't be so difficult to add LEDs. But I don't know how I am going to do that (yet).

In the meantime, my plan is to just paint orange-red tips at the ends of the barrels. 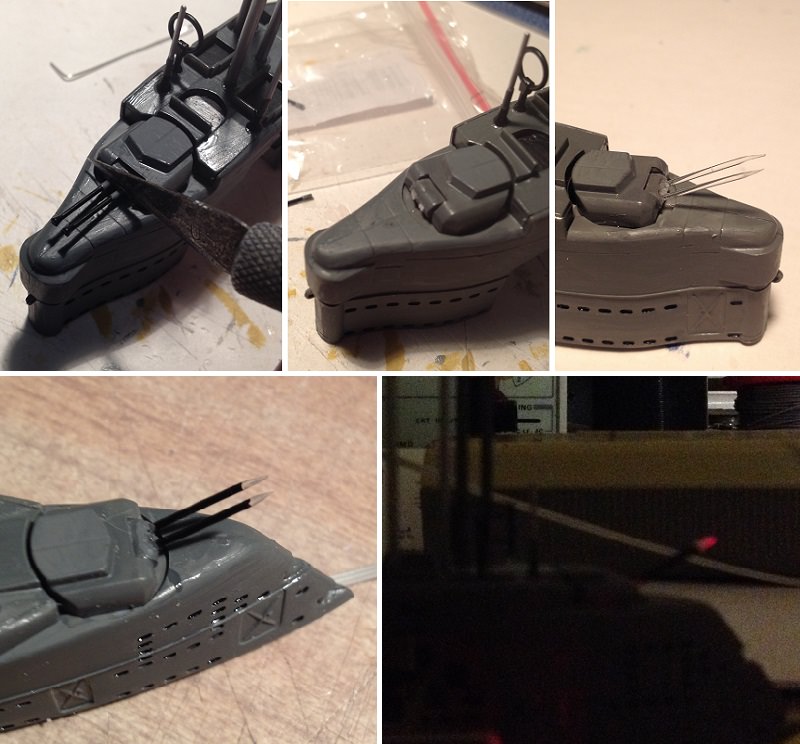 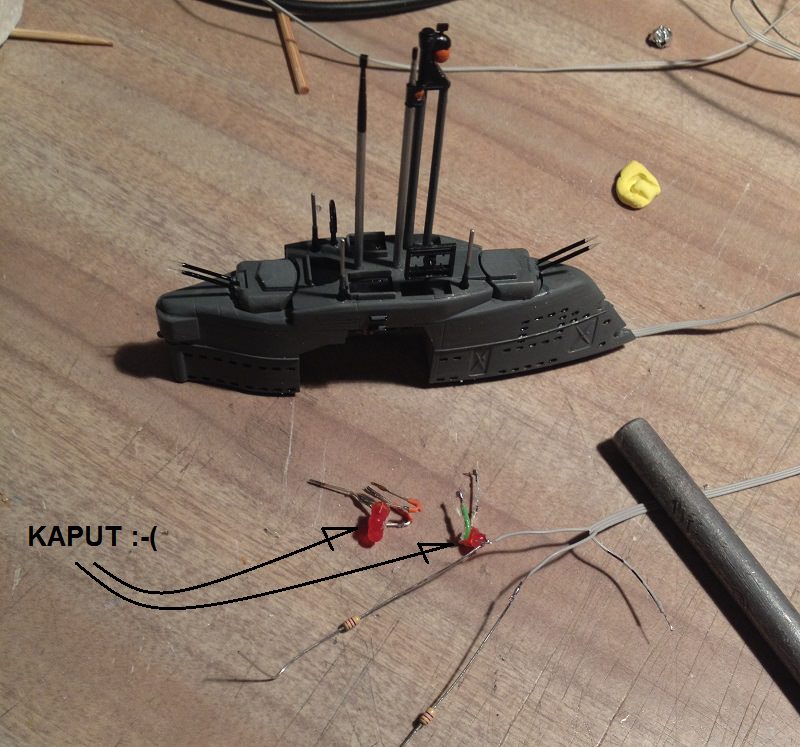 So sorry about this lighting mishap. Your detail work on everything and all of your lighting has been amazing! I'm positive that, with your skills, you'll be back in business in a heartbeat. Here's to those 'silent' killers!

Fright said:
So sorry about this lighting mishap. Your detail work on everything and all of your lighting has been amazing! I'm positive that, with your skills, you'll be back in business in a heartbeat. Here's to those 'silent' killers!
Click to expand...

I will return to this build, but have other commitments at this present time. This model, with two others, are on rotation.

Have been considering cutting out the gun axles and replacing them with scratch-build sets. Will experiment first. If I can make them to flash well, then I will install that. If not, then I'll replace the original set (hopefully nobody will notice anything different.

Hello Swabbie !
I’m a new member.
I started the U-2540 and I’m applying part of your presentation.
You seem to be reproducing this submarine as best you can.
Are you finished and do you have any other photos on the continuation of your model ?
Here my U-2540
Bye
You must log in or register to reply here.
Share:
Facebook Twitter Reddit Pinterest Tumblr Email Share Link
Top