Pin holes what they look like if you are careful.
You can also bypass the pins from station 5 to 7.

About the pins or "nails" to hold the first strip in place:
Here is a first planking strip held in place with some "clamps". It is fine as long as it is the only one in place. The thing is that eventually a second strip needs to be glued to it: the clamps come out and the first plank is loose unless it has been glued to the station mold, which I would not really recommend as then you will possibly end up with some major glue marks requiring sanding. Some people actually go out of their way to avoid gluing strips to the stations.
The pins will hold it in place allowing the subsequent strips to be added. They will also allow adjusting the curve of the strips against or sometimes away from the molds: should it be needed.

A quick photo just to illustrate that holding the first strip in place can be done but pinning is the most practical option as that strip basically needs to be firmly in place to ensure symmetry with the other side.

The strip does not need to be pinned at every station.
G.

Doesn't this first strip get covered by outside whale at midship where you are talking about pinning it to molds?
G

And another photo of the bottom of the stem for a canoe built without a keel. 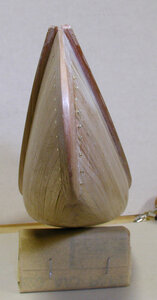 Kkonrath said:
Doesn't this first strip get covered by outside whale at midship where you are talking about pinning it to molds?
Click to expand...

Do you have any photos of build with exterior keel? Just wondering what and why someone wanted such a build.
G

Kkonrath said:
Do you have any photos of build with exterior keel? Just wondering what and why someone wanted such a build.
Click to expand...

Here is one,
It may be hard to see but it has a keel. Even has 1 runner strip on each side to "stabilize" the canoe and also to help paddle straight.

Looks nice. Have you seen full scale canoes designed like this?

Just wondering how many there may be like it.

Kkonrath said:
Looks nice. Have you seen full scale canoes designed like this?
Just wondering how many there may be like it.
Kurt
Click to expand...

It is not seen often but there are some around, although these days this type of setup is likely more seen in aluminum canoes.
It may be a feature found on Square-stern freighter canoes are sometimes built this way.
Years ago, I made a couple models of large guiding canoes used on the Restigouche river from photos taken in the 70's.
The 1:1 cedar-strip canoe I built for myself in the 80's was built this way: 16' design shortened to 13'.
G

I paddled a canoe from Washington Island Wisconsin to Fairport Michigan that was built like that. A 19 footer with a rather wide beam. Held two guys and gear for a week. It was great for paddling big, flat water, but not so good on rivers or streams. We camped and investigated various islands along the way, taking 6 days for the trip. I had other canoes for river work.

Double keel is new to me but there is always something experimental out there that some builder may have wanted to try. No real need for a second keel if you know how to use a J-stroke or coordinate with a bow paddler.
PT-2
You must log in or register to reply here.
Share:
Facebook Twitter Reddit Pinterest Tumblr Email Share Link
Top