there is enough information scattered all over this and other forums about bending planks.
I thought it might be a good idea to cover the subject all in one place. so starting with the PDF file

there are a few basic rules
1 not all wood is bendable some bend easy while others no matter what you try to do they will not bend
2 air dried and green wood bend much easier than kiln dried wood
3 in general the thinner the wood the easier it will bend, to a point as the wood gets thinner it also is loosing strength and it will snap.
4 there are different ways to plasticize wood chemical and steaming.
5 sometimes bent pieces are actually carved to shape
6 kerfing is a method used for tight bends

This is my 'crude but effective' plank bending jig 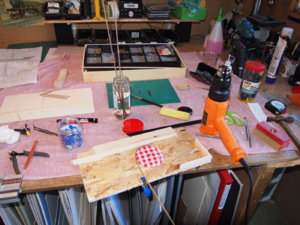 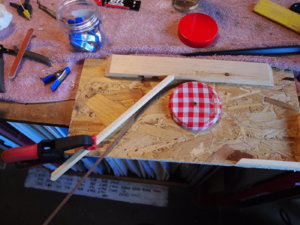 Sulaire said:
This is my 'crude but effective' plank bending jig
Click to expand...

...as long as it does the job and you are happy with it! That's all matters. Thanks for sharing.

please speak up members!
tell us how you bend planks beginners want to know

the wood you see being bent in the videos is pearwood it bends quite well not even being soaked. As a matter of fact all fruit woods will bend Apple, Plum, cherry, citrus, pear, peach.

one reason kit builders have a hard time bending wood is because kits are usually double planked so the planking material is very thin. This wood is often kiln dried and it sits for a long time in the box. This makes the wood very dry and brittle. As an example go outside and pick a twig off a live tree and bend it, the twig will bend easy, now pick a dried twig off the ground and try to bend it that twig will snap every time. Same applies here air dried wood with a moisture content of 18% will bend so much easier than kiln dried wood of 6%.

sometimes bent timbers are not actually bent but carved to fit. 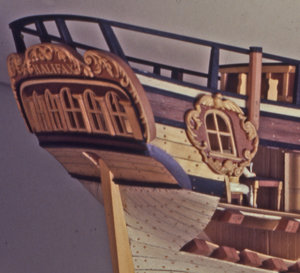 another area is a cap rail on a stern

looking down on the stern timbers there is an arch 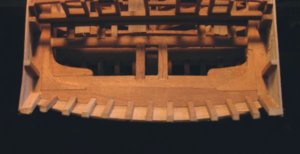 looking at the stern the cap rail also arches 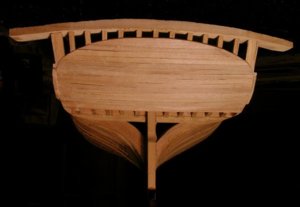 another example is the side moldings on a stern 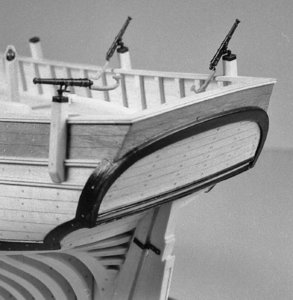 starting with a pattern 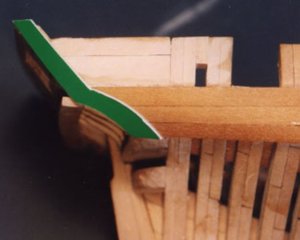 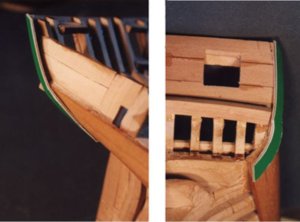 a thicker block of wood is used and the pattern traced on the wood. Next the inside surface is sanded to match the curve of the hull 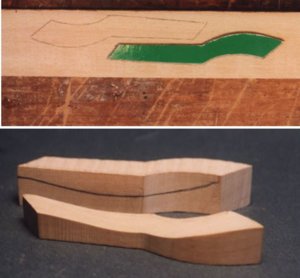 the molding is worked into a curve 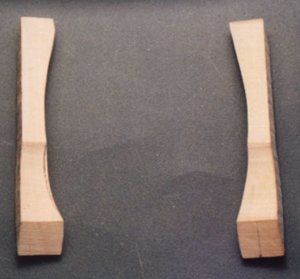 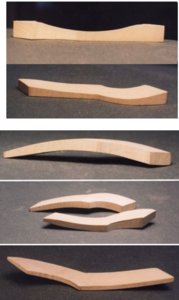 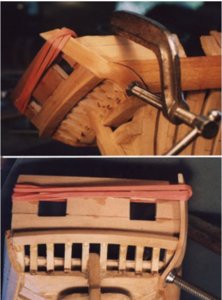 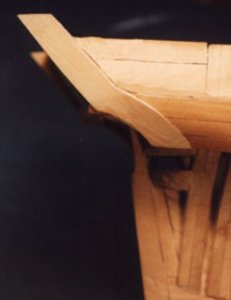 GREAT TOPIC DAVE, AS TO HOW I BEND MY WOOD AFTER TRYING SO MANY DIFFERENT WAYS I NOW USE THIS METHOD; I RUN THE WOOD OVER HOT WATER FOR ABOUT 5 MIN. THEN I USE A REMINGTON HAIR CURLER TO BEND THE WOOD, IF IT NEEDS MORE I REPEAT THE PROCESS, JUST MY WAY, ANY MORE IDEAS OUT THERE. Don

I use steam to bend my planks, I built a simple steam box out of PVC pipe and have a plywood frame built to hold it in place over a single place hot plate with a kettle on it. A few minutes in the steam box and planks are ready to be installed. 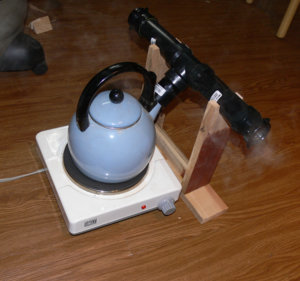 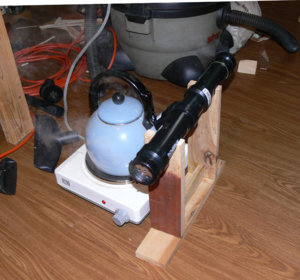 that is a nice set up Bob

I just want to remind anyone building a steam box 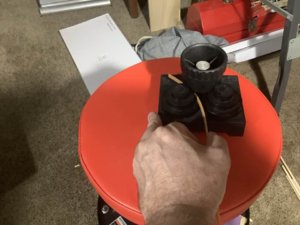 Here is a hair curler I use- works well and with a little patience will bend wood up to 7mm:

I was bending wood with a curling iron, and holding the curling iron and both ends of the wood was not working well. I made a wooden clamping collar to hold the handle of the curling iron in a vise, which was an improvement, but still not great. I noticed that this particular curling iron had...
shipsofscale.com

That steam bender is a work or art in itself. I've also use one of those notch cutters and I'm happy enough if it's in an area that will never be seen.

Well I use one of those benders that notches the back of the plank. I know many do not like it and I have been chastised by some for doing it,

kerf bending is a tried and true woodworking method for bending wood, those who chastise the method really do not know what they are talking about

In addition to kerf spacing and depth, the material you choose also affects how tight a radius you can bend and still get a smooth surface. Most materials used

Sulaire said:
That steam bender is a work or art in itself. I've also use one of those notch cutters and I'm happy enough if it's in an area that will never be seen.
Click to expand...

I tried to copy the steam box that ship builders use to bend planks, just at a reduced scale, I figured: "It works for them, why not use what works". You may notice the ends of the steam box/pipe, it has perforated end pieces, so pressure is not allowed to build up, just as Dave mentioned. Don't want the rig to explode! It works well for all species of bendable wood, some just require more time in the box, depending on the thickness and species.

Squarebriggs said:
I use steam to bend my planks, I built a simple steam box out of PVC pipe and have a plywood frame built to hold it in place over a single place hot plate with a kettle on it. A few minutes in the steam box and planks are ready to be installed.

The same, kettle, plumbing fittings and a pvc waste pipe steam chamber. One of my bodge ups that works perfectly! (very untidy compared to yours though!)
B

I build cutters generally so use larger scales, The scale may be odd but it's according to the size I want the build to be. I approximate the plank scale thickness according to scantlings where available so tend to work with planks around 1.5mm. Cherry is the poor man's nice timber here and responds well to steaming and bending. About 2/3 of the planks require a downward lateral bend (particularly if clinker, no margins) I may have to re steam a plank a few times, bend, let it set, bend a little more.....I don't think there's a quick fix. (If you get tired of waiting make some cannons!)

Dave Stevens (Lumberyard) said:
Well I use one of those benders that notches the back of the plank. I know many do not like it and I have been chastised by some for doing it,

kerf bending is a tried and true woodworking method for bending wood, those who chastise the method really do not know what they are talking about

In addition to kerf spacing and depth, the material you choose also affects how tight a radius you can bend and still get a smooth surface. Most materials used

Thanks for sharing Dave, interesting article!
B

No good for me Dave, normal bending isn't my problem, the lateral thing is a world of pain.

Very interesting topic! Thanks for starting it Dave.
I bend my timber (mainly Costello Boxwood) by boiling it for five to ten minutes depending on thickness, then clamping it in a rough and ready former until fully dry (overnight) Make the former with a slightly tighter radius than you need to allow for 'spring-back'. It will then retain it's shape and can be glued to the boat with no residual stresses, but I still trennel the pieces thoroughly!
I use the same method for bending ebony, without any particular problems, but with ebony do not rely on glue, as it is slightly greasy, but ensure you have plenty of trennels holding the piece, and do not force the wood to the bend. If the curve is too tight, then I use the same method as Dave, and carve a piece to the shape of the bend. 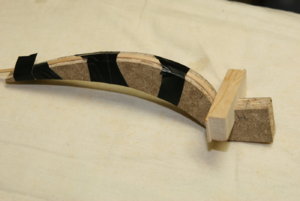 'Rough and ready' former, with plank in place. A pair of 'folding wedges' hold the end of the plank, and electrical tape is strong enough to hold the plank to the former.

I also use Dave's method to carve counter rails and the like, where they curve in two directions. 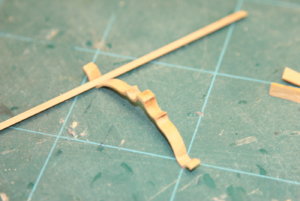 Counter rail curved in two planes, or directions. The thin dowel is there to hold the piece up ,as it would topple backwards without it!

Moving on to bigger stuff, when I built my steam launch, I steamed the 30mm x 3mm x 1800mm long mahogany planks in a 'steam chest' made from a length of copper heating pipe, well insulated with old duvets. I was also able to bend the gunwhales laterally using this method.
The ribs in the launch were bent using a length of scaffold pole fixed vertically in a vice, with a blowlamp fixed to heat the top of the tube. The ribs could then be bent by bending them around the lower part of the tube using two hands with a backwards and forwards motion. Having the blowlamp above the workpiece saved the wood from being scorched, together with my hands!

Dave, are you going on to talk about chemical bending of wood? The only experience I have had was years ago, when I soaked some timber strip in pure Ammonia (dangerous stuff) It softened the wood so well that I could actually tie a knot in it! The wood went solid again when it dried out. I didn't like the staining it left on the timber, so didn't proceed further, but had great fun watching the boat club members trying to work out how I had put a knot in the wood'
I would be very interested if you have any experience, Dave!

I do not try to bend a plank in one go. As you saw in the videos I will bend a pieces then rebend it sometimes 3 or 4 times.