This is my log for my scratch build of a cross section of the bomb vessel HMS Granado. The plans were drawn by Jeff Staudt and were based on Peter Goodwin's AOTS book, which I plan to use as a reference. The section is from the center of the ship and includes 3 gun ports on each side, and a pit for a 13" mortar, one of two mortars on board. The rectangle in the image shows the location. I purchased the plans in 1/24 scale, but that is clearly too large for the space the Admiral has alloted for the model so I'll build her in 1:32 scale. Even at that reduced scale, the model is 7-1/2" high, 10" wide and 10-3/4" long!

Granado was one of a dozen bomb vessels, or mortar-armed ships built by the Royal Navy between 1740 and 1742. She was launched at Ipswich on June 22, 1742. The vessel was 91'-1" long with a beam of 26'-2" and was 269 tons burthen. This is just about the size of HMY Caroline! The Granado was a small ship! Despite this, her framing was very robust - to handle the weight and recoil force of the two mortars on board.

The framing is one double frame, followed by three single frames with this sequence repeating. Jeff's plans were somewhat stylized for ease of construction. Each frame uses typical chock and scarf construction, rather than the sistered frame approach used by Hahn and others. One interesting feature in construction is the use of reinforcing timbers fitted to the floors and lower futtocks of the frames below the mortars. These were called floor and futtock riders and were designed to beef up the frames so thay could safely absorb the recoil shock from the mortars. 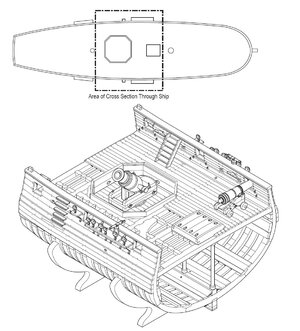 Hello Dave, You have been known on SOS as a very skilled craftsman and have an eye for all the details. This project should be very interesting, hence you have been built a few other crosssections under your belt... Taking the front seat, and looking forward to your progress updates.

Thanks, Jim, and thanks to everybody looking in!

The jig is upright, like my Blandford and POF Armed Virginia sloop. The plans for the jig top lay it out in two pieces, joined at the midline. Proper alignment is important. The first step is to use spray adhesive to attach the jig top template to some ¼” plywood and then cut out the center part and form the notches that hold the frames in place. There are 5 double frames and 12 single frames – 17 in all. The run of the frames moving aft is pretty straight except for the last few which begin to turn inward, narrowing the hull. The last three frames also rise on the hog. The jig top is positioned on 4 supports that hold the top such that the top surface of the jig top coincides with the load waterline. The jig is well designed and requires minimum tweaking with files. 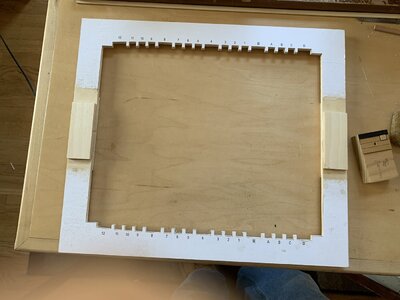 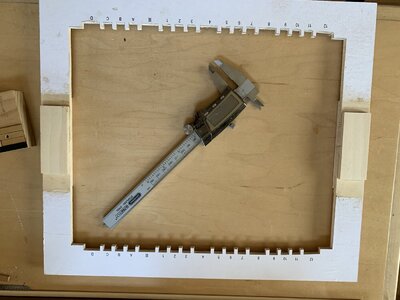 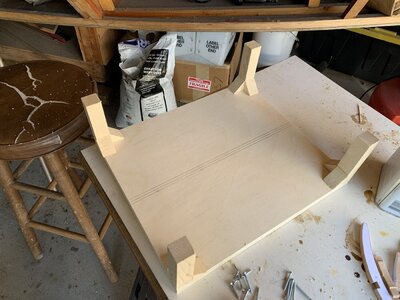 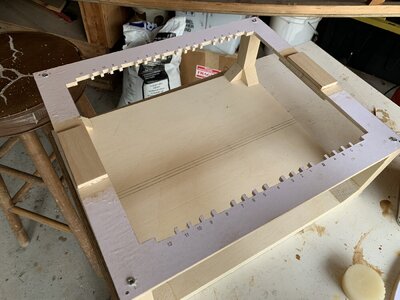 Looks like a great project Dave, where did you purchase the plans?

These cross sections are very interesting. A great way to model without having to worry about putting a 3 or 4' long model somewhere when done. This particular section has alot of great detail in it too.

DonRobinson said:
Looks like a great project Dave, where did you purchase the plans?
Click to expand...

Don: I bought them from Model Ship Builder in 1:24 scale a number of years ago. Recently, though, Winston made them available in 1:24 scale as a .pdf over at Navy Board Models. Now that the site is closed, I'm not sure where the files are now. I'll ask, though.

Very interesting project and a good idea to make a cross section of a mortar.
Years ago I started the Granado kit from Jotika..... but unfortunately it was lost by a divorce .......
I will follow with big interest

The first part to make is the keel assembly. Jeff's plans call for this to be constructed of 4 separate parts: The hog, keel, upper false keel and lower false keel. I decided to make the hog, or rising wood, part of the keel. The keel /hog assembly, and the upper false keel are European beech, the lower false keel is ebony. There are notches cut into the hog for the various frames. I was able to do this on my Byrnes saw, but it would have been far easier with a mill. You can see the notches rising at the aft end of the keel. The last task was cutting the rabbet. The keel assembly is fixed to the build board by brass rods and is removable. 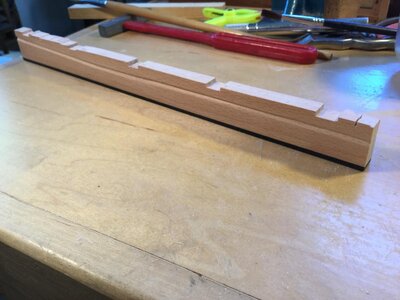 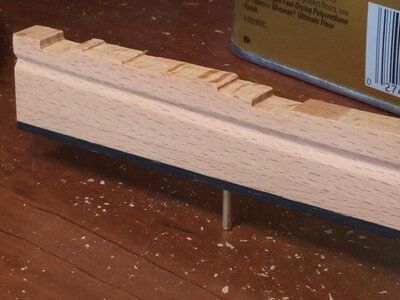 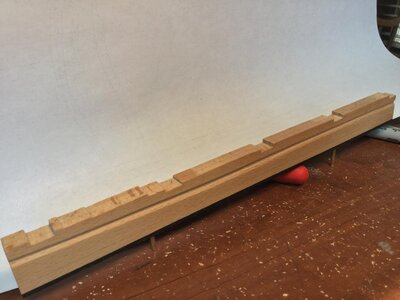 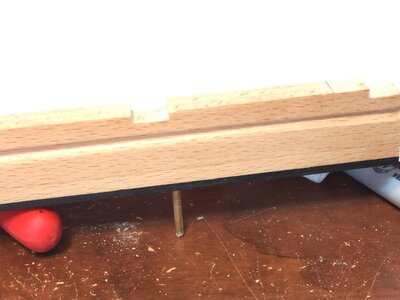 With the keel completed, I turned my attention to constructing the frames. There are 17 in all – 5 double frames and 12 single frames. The are assembled using typical chock and scarf construction. Because of the style of the joints, they must fit very tightly, because there isn’t much gluing surface and part of it is end grain, so the frames could be fragile. Still. It’s possible to get pretty tight joints. The trick is to make the chocks oversize, and sand/file them to fit first into one scarf and then the mating scarf. The photos show the sequence. 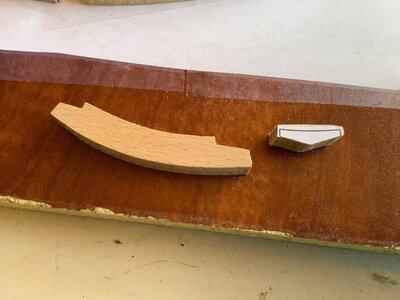 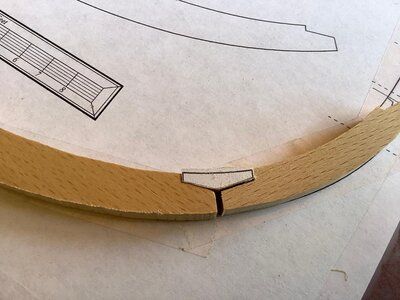 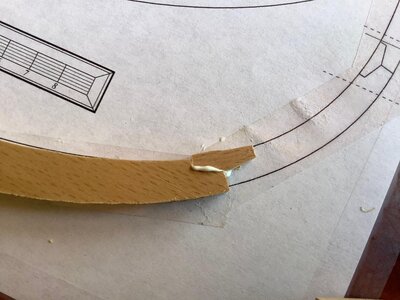 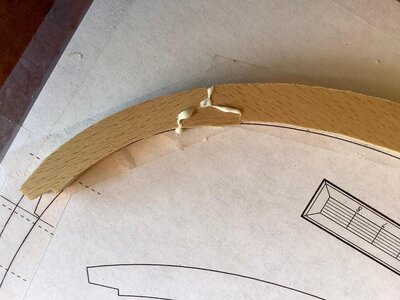 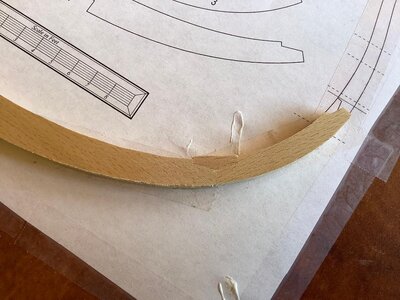 Thanks, Kent. Dead ringer for white oak at this scale!

Some photos of the chocks in a finished frame before sanding. I use a variable speed Dremel on low to sand the chocks and finish with flexible sanding blocks by Norton 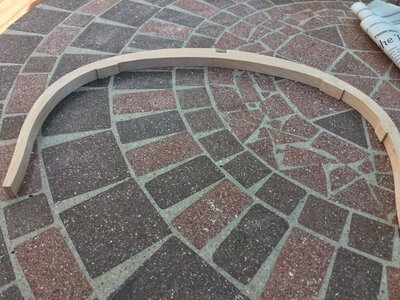 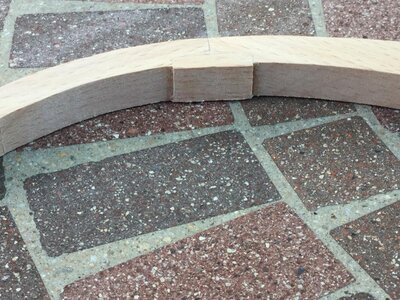 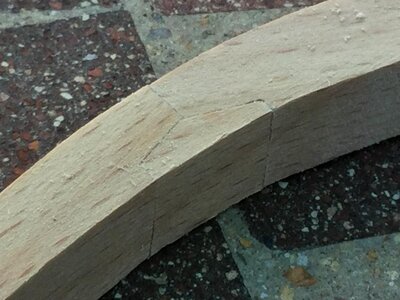 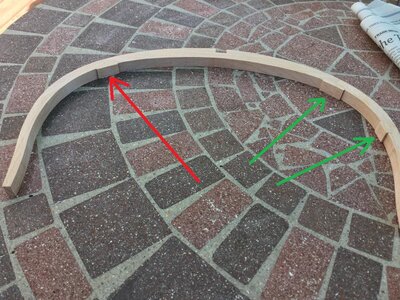 I think the 3D rendering will be very useful for other builders!

Uwe: The left second chock fit so well that unless I did a very tight closeup for the photo, it was essentially invisible!

Definitely on my bucket list of builds to do, so will be lots to learn here, thanks Doc!

Looking forward to the 3D version as well, that is going to be awesome!

FYI 1/4" and 1/2" scale plans are now available for download from the MSB Projects page.

Only the last three frames have any bevel. The photo shows how much. 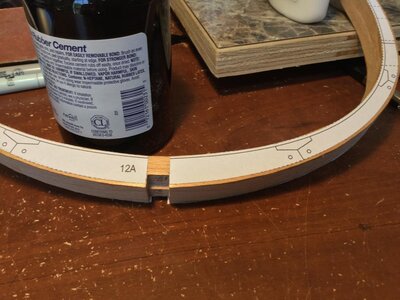 I installed model railroad spikes as bolts in the double frames only. Once that was done, the frames were given 3 coats of poly on their fore and aft faces. I used spacers above the waterline between frames and glued them all to the keel and hog. Each frame had a spreader bar that attached to the top timbers by those little yellow nails. No glue! 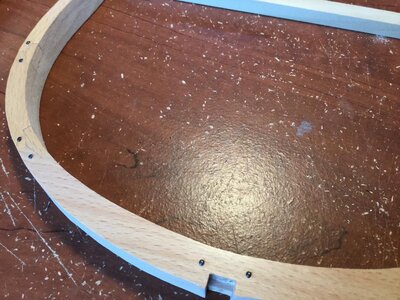 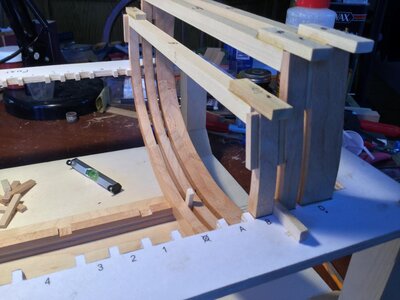