Tony H said:
Now I've finished the Black Pearl I'm going to complete a model I started around 25 years ago. The Unicorn was chosen because I felt it was the best ship in my price range at the time. This build stopped in 97 when we moved house then a new puppy, change of job and no time for models.

Hi Tony,
I can see your wood working skills were well developed 25 years ago. I'll be curious to see how the canons are set up below the main deck.

Daniel20 said:
Hi Tony,
I can see your wood working skills were well developed 25 years ago. I'll be curious to see how the canons are set up below the main deck.
Click to expand...

Thanks Daniel I'll get to them soon first I need to fix up the planking and the hull then I will continue the build.

G'day I've haven't made much progress with my new project, I striped back the planks that needed replacing then hit a problem. 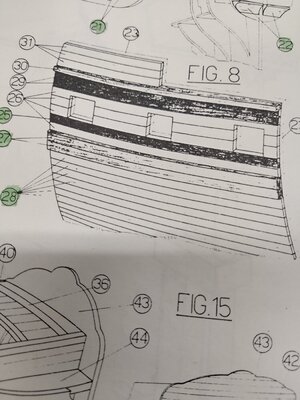 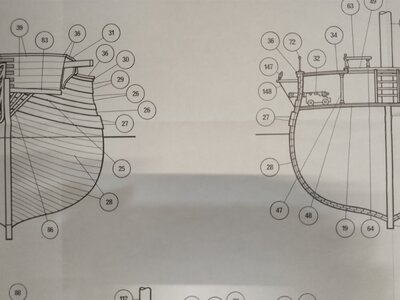 I got up to the first black plank #25 when I stopped the build. Now when I checked the remaining planks they are taller than the first planking. There's a error in the drawing one view shows two white planks the other shows three. I decided to go with 3 planks and raise the height of the deck by 1.5mm. 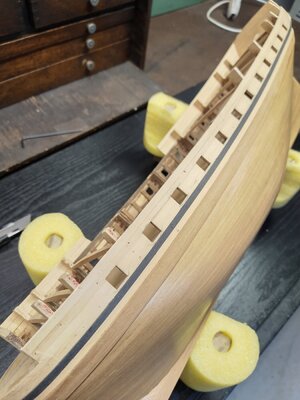 Here I have removed the defective planks from one side, I'm going to add one extra plank that runs the full length then do the repairs.

Finishing off the second planking, next job is to fix up the loose planks on the hull.

Look good, glad you got the issue figured out and how you are going to fix it.

Looks like a great workaround for a minor problem. I now see that the subfloor of the main deck is off and you have easy access to the canons.

Good progress Tony! I will continue to watch your work with interest.

Daniel20 said:
Looks like a great workaround for a minor problem. I now see that the subfloor of the main deck is off and you have easy access to the canons.
Click to expand...

Thanks Daniel the deck was only dry fitted, I will start working on the cannons this week.

The second planking is now complete and I have fixed up the loose planks. 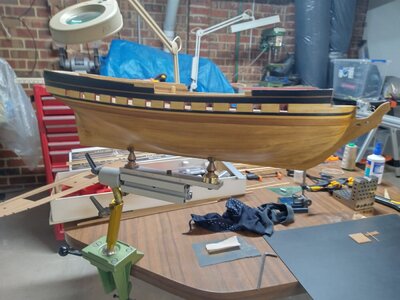 I have a different way to hold this ship and am finding it very handy. It was originally used to repair PCBs until I adapted it to hold a model. 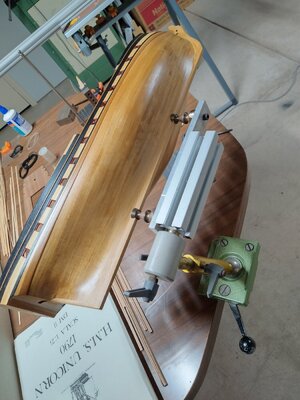 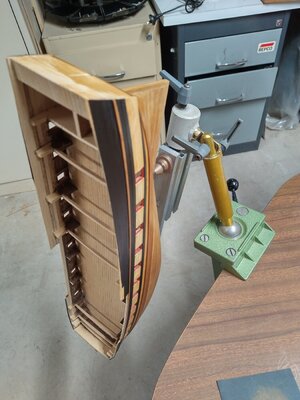 To make sure the cannons are fixed securely I will pin them in place. 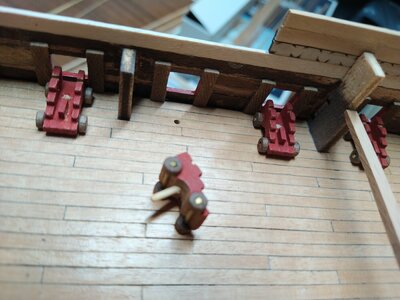 Tony she's looking magnificent! And once again you have some of the coolest gadgets for clamping I've ever seen! What type of wood is the veneer?

Daniel20 said:
Tony she's looking magnificent! And once again you have some of the coolest gadgets for clamping I've ever seen! What type of wood is the veneer?
Click to expand...

I was lucky enough to be in the right place at the right time, most of the stuff I use has been modified scrapped production equipment it's been good to finally get to use it.
The second planking is Walnut, black lime and maple, the maple was a lot lighter colour when I purchased this kit.

Firstly a big thanks to everyone who reads this, I have finalized the cannons on the lower deck. 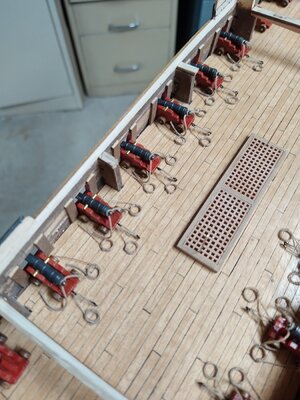 As you can see I have only done what will show when the upper deck is fixed in place. 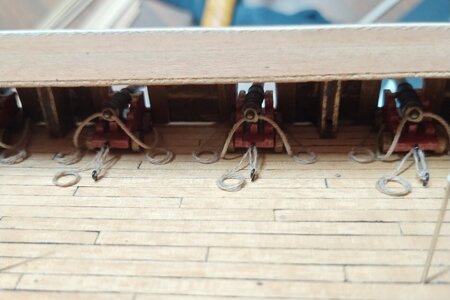 This is more than you would normally be able to see when viewing these cannons.

The gratings where a bit of a problem as about 25% of the parts where cut on a taper. As there was only 5 spare I had to use them as it would have taken too long to get replacements. Only the worst ones show. I'll use this one on the lower deck where it won't be seen. 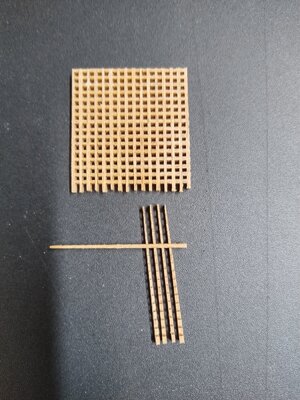 If you look at the top LH corner you can see poorly cut parts.

Next week I'll be attaching the upper deck and planking it.

I really like your work Tony. You have created a beautiful hull and your deck placings and cannons are just right. I will continue to follow with interest.