Great to see you back and feeling better, Don! God is good!

Well I found out I am a lot slower than I use to be BUT I think I can do the ship now. The following picture is the beginning of opening the captains quarters to have a view through the side windows. As you can see, I have stripped the quarters and opened up the sides. 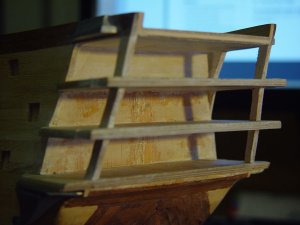 I still have some more clean-up to do. Removing the white paint is a real pain especially on wood. I used acetone but it is a slow process, plus the paint is two years old now.

From day one, I wanted to make the ST look as she did in 1805. I want to copper the hull, add the additional guns and paint her as described by Lt. William Lovell on the HMS Neptune at Trafalgar in 1805. The only drawback to this plan is the stern plate. If the research of Joaquin Rodriguez Crespo is correct, the 1805 stern plate is butt ugly. 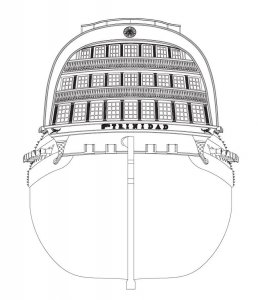 It is obvious that Spain had bigger plans for this ship than using her for a defensive gun platform in the harbor at Cadiz. She was dry docked from 1799 to 1804 where she was modified with the fourth deck and additional guns were added; none of which improve her handling or sailing qualities. Since she had already been in service (off and on) for 30 years by 1799, I am assuming the largest ship with the most fire power was truly the only goal. It would appear a fancy stern plate was not in these plans.

Sounds like it will be nice when you are done!

Since the beginning of this build, I have always fretted about the stern of this ship. The metal plate that comes with the kit is the 1778 version. The one I want to build is the 1805 version. Looking at the Crespo drawing, the windows are skewed, bowed out and rounded from side to side. Well, my decks are flat. The bowing out; I can do. The skewed windows I was not sure if it was a perspective view or a true representation. So with the flip of a coin, it is now a true representation.

Since the stern is a scratch build I like to make patterns, test them, then use the pattern to cut the pieces I need. Unfortunately, I could not use the Crespo drawing because of the rounded decks. So after screwing around with PhotoShop, I came up with the following for my patterns. 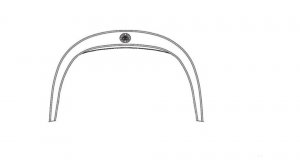 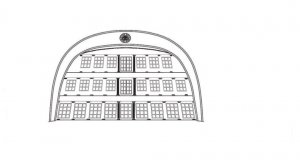 Obviously the columns and the railings are missing. What I am going for is the placement of the windows and the two doors. I skewed the end windows to match the angle of the stern plate. I then changed the skew by 3 degrees on each window inwards. I am fairly confident that the side windows will come to life in the same manner.

So onward to making the pieces and fitting them.

It's me again,
I have determined I need a stern plate arch (for lack of a better term), then separate pieces for the door and window areas. This shot is the template glued to a sheet of thin (1/8”) plywood. 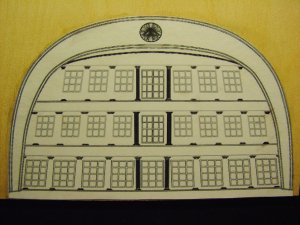 I glued the entire template down even though I only need the arch. This keeps the legs of the arch from getting cattywampus (that's a word, huh?). The door and window area templates I have glued to a thinner (1/32”) sheet of plywood. These pieces need to be flexible as they will be bowed outward some. Here is the door and window pieces that have been glued to the plywood and then rough cut. 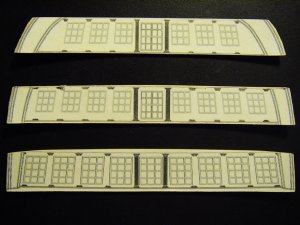 Here is the door and window pieces roughly fitted to the stern. 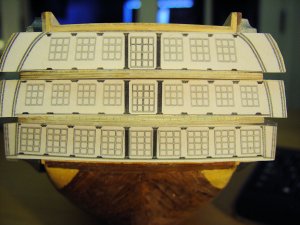 From this point several things have to happen at once. I need to fit the stern arch to the ship. Then the posts between the decks that I left when I cut out the sides needs to be removed completely. Next the door and window pieces need to be fitted precisely to the stern. Then the windows and doors needs to be cut open.

After that, I need to make the window pieces for the sides. During my down time (my hands really hurt plus there's always house projects) I have been determining how I want the quarters look. You know when you take on something like this; there is an awful lot of detail work to consider. I don’t plan on getting too crazy with it but I do want it to be worth my effort.

Thought I would show you my progress.
Later,

I was reviewing my build log and discovered I was about to make a major mistake. I found I had actually added the decks for the quarters. After two years of being dormant, I had forgotten this point. If I remove the posts as I mentioned, there would be nothing to support the decks. So I will have to mount the stern plate arch BEFORE I remove the posts. This is not an issue but something worth pointing out if anyone is following this build.

I am finally making progress; at least for me. As you saw in the last post, I have all the pieces cut out for the stern plate. Now I have the stern arch, shaped and installed, as in glued, to the ST. The two shots are directly from the rear and one side shot. The side shot is somewhat blurry but you can definitely get an idea of what is going on. Oh, I also removed the support posts from the decks. This is still in the rough phase. A little move trim here; file there but it fits. So far: so good. 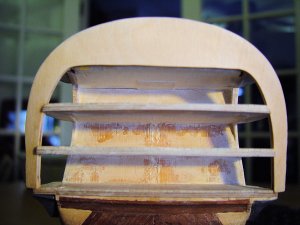 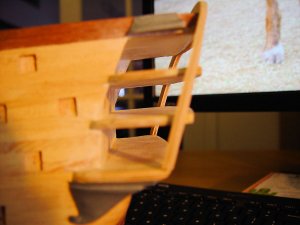 Now I have a gazillion little windows to cut out (well maybe not a gazillion but it will seem like it with my issues) and do a final adjustment fit for each of the window plates. I also need to do some cleanup in the quarters.

Before I get crazy with the quarter detailing I need to make the side window panels. All-in-all; I am pleased.

I got a question.

I have always been taught that God will not give you a greater burden than you can handle. I just wish HE was not so impressed with my abilities.

I am cutting out the windows for the window plates for the stern of the ST. Here is a shot of my rough cut. 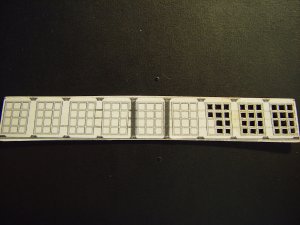 At the moment I am cutting them by hand using a very small triangular shaped needle file. The windows are typically 3/16” by 3/16”. I can do one of the panes in about 10 minutes. Well there are 9 to 12 panes per window and 9 windows on the 2nd and 3rd levels and 7 on the 1st level. Just on the 3rd level that is 108 panes. Total the other two levels and the side windows… well as you can see that’s a lot of cutting and filing. Since I have a Dremel Router Table and diamond router bits down to 1.0mm I got the bright idea of using this combination to rout out the bulk of the panes and then clean out the corners with the file.

I used the 1.0mm router bit so I would have room to move around. Regardless of router speed, it is a very slow process. Slower than doing it by hand. I was wondering if any of you guys have a recommendation for a router bit that would do this faster and easier. I have been looking at CNC router bits but am not sure they would work or maybe work too good, meaning I could not control it by hand.

I need to take a different tact on this. I can do the work but with my medical condition with my hands, it is painful.

Thanks in advance for any ideas you may have.

Short of buying a CNC router table or a 3D printer, I couldn’t figure out an easy way to do the windows on the rear of the ship. So I filed them out by hand... all 258 of the little buggers. This was a painful process for me but I “Got-R-Done”. Yeah Me!!

I still have the side window panels to do but this should be much easier (not as many windows). 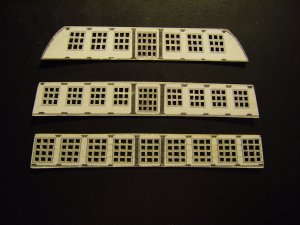 My next steps are to set the proper curve for each of the deck window panels. I need to do this so I can just set the panels in place when it is time to install them for the final time. Then create the side window panels and shape them as well. When this is done; on to the interior decoration of each of the quarters.

One part of this I must consider is the balance of the ship. Can I complete the ship with the stern completed or do I finish the panel installation at a later date? I am still considering coppering the hull since that was the configuration in 1805.

At any rate, I am happy with the results thus far. I wish I could do this faster but it’s just not possible.

Glad to see that you can do such tiny work again. Your work is interesting to follow.

Thanks for your comments. From what I can tell, there aren’t many records for the ST especially for its changes over time. Most of the focus on this ship has been its array and quantity of weapons. My research has led me to this point and configuration for the 1805 period. I am working on the sides of the quarters at the moment. As soon as I am happy with the fit and the windows, I will update my log.

After the last few years, I am glad I can do anything. I have missed working on the ST. Being able to do this has got my creative juices flowing. It is funny that some of the biggest challenges come from these tiny parts.

Ever have one of those “ah ha” moments? You know… do I want soup or sandwiches or both? I have been working on the side plates of the captain’s quarters off and on for a few weeks now. It seemed no matter what I did, I could not get the side plates to look right.

So the other day I was surfing the web looking at captain’s quarters, when, “AH HA”, it hit me. If you look at the picture below, those of you that are really skilled in building these things will probably see the problem immediately. This is looking down the side of the ship towards the stern. 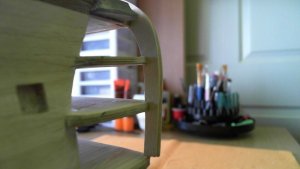 By the way, the photo comes to you courtesy of the MS LifeCam Studio 1080p HD Webcam. This thing is dirt cheap ($65.00) and once you figure out the standard camera software that comes with windows 10, it takes a really nice picture.

I have been using an old Sony DSCF707 but was getting tired of all the adjustments and then transferring the pictures to my computer. With the little webcam, I just point it where I want to shoot, move it in or out for the shot, focus and click, I’m done. What is nice is you can see the picture you are going to take on the computer before you take it. I realize you can do what’s called tethering with some of the newer cameras but sadly my DSCF707 wasn’t one of them.

I got a little tripod for the webcam, so setup is easy. I don’t care about the webcam or video recording functions but it does these equally as well.