Got rather tired of building models and have spent the last few days trying my hand at a technical drawing. I have just completed plans of the four-masted barque Pass of Brander (1890).
This is my first attempt at this sort of thing, but quite pleased with it. Not a very popular subject (big steel sailing ships), but I have always been very keen on them.
Bob 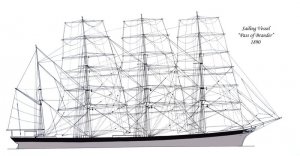 Bob:
That looks pretty good. Never tried that but do not think mine would come out that good.

Now that is incredible - very nice - perhaps you can mount this in a frame.

Thanks Donnie,
I will probably use it as a book illustration, but interest in this type of sailing ship these days is virtually zero as far as model shipbuilders are concerned.
I am now working on another. I have just finshed the sail plan and am now involved with the deck layout.
Bob 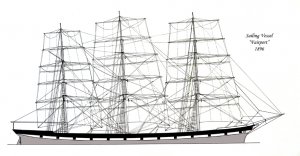 When I've read the word "Pass", I wanted it to be Pass of Balmaha (later the SMS Seeadler). Have you ever drawn the plans for that one? My daughter wanted me to build the famous raider for her and I haven't been able to locate any reliable plans of that ship.

Hello Kaz,
I have never done Pass of Balmaha (Seeadler) There are kits, but as far as I can see, they are not accurate, and seem to just be Gorch Fock with a diferent name! Seeadler had the same rig as Fairport (Above), Stump t'gallant rig - double topsails, double t'gallants, but no royals. I doubt if plans of Seeadler exist, or they would have appeared by now!
Bob
K

Hello Bob,
You are right. The available kits are not accurate and the only relatively good drawing I have seen it the one I attached. I found it on eBay, but it had been sold and I was unable to contact the seller.
While I am almost sure there are no plans of the Seeadler, there may be some of the Pass of Balmaha somewhere. There are a few scratchbuilt model out there, so there is a chance some good plans (with hull lines) exist.
Kaz 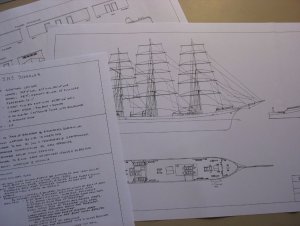 The sail plan that you have posted is very innacurate. As I said, Pass of Balmaha/Seeadler did not have any royals, and only had five square sails on each mast. Lines plans are not all that necessary, as all iron and steel sailing ships were very similar in shape, and there are plenty of lines plans in books that would suffice. It is the deck arrangement that is the problem. The sail plan of Fairport is as close as you can get to Seeadler. There are quite a few photographs of the Pass of Balmaha/Seeadler around, but the deck arrangement is not very clear.
Bob
K

It seems that the Pass of Balmaha had five square sails on each mast, but if the well know photo of the Seeadler really show that ship, she had six.
That's a bit strage, as I can't really remember reading about any modifications done to her sail plan. 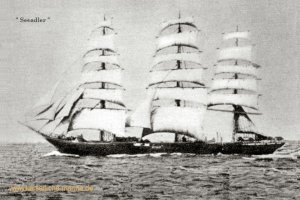 I don't believe the image above is the Seeadler! By the start of the Great War, square-riggers were finding it very hard to compete against steam, and the stump t'gallant rig was for economic reasons, by not have royals and the associated rigging. Seeadler was posing as a down-at-heel sailing ship, eking out a bare living. Why would the Germans add royas and make her look more prosperous? In recent years, interest in ships such as these has fallen to an all-time low, and probably they all look the same to kit manufacturers and modellers alike, so they just produced plans of what they thought was correct, safe in the knowledge that "no-one would notice!" They got their hands on Pass of Balmaha, why would they waste money extending the masts and fitting royals. As they put in an engine, it would have had nothing to do with speed.
Bob
A

I am enjoying this to, just having a read. Learning a bit here and there. I started playing with model ships in my retirement and like to play with a piece of wood. For me to go into history and read and read and read would be to much for me. I would not take it all in. In bits and pieces like this is great for me to learn a bit at a time.

Further to the Seeadler topic. When the Pass of Balmaha was built, she did have royals, but these were removed, as I said, for economic reasons. One of the reasons for these ships falling into obscurity, is the almost universal reluctance to read about them, despite the fact that merchant ships, sail steam, or diesel had inifinitely more interesting histories than warships. One sea battle is pretty much like another, and in between, it is just a boring round of drills and discipline! Here is a FREE dowload with a constructional and historical articles, complete with plans for a miniature Thames River tug. http://payhip.com/b/krO6 The synopsis that can be viewed by simply clicking the link, has been read by 5,082 people in about a year, but only 285 of them were sufficiently interested to download the document, despite it being completely free! I have since produced about one a month, but after the first issue (above) they are priced at £1.49 each, via Paypal, but the readership has settled down to about five people per issue, who absolutely love them! Every issue contains at least one ship plan, plus various constructional articles!
Bob

[QUOTE="shipbuilder, post: 24696, member: 464"... merchant ships, sail steam, or diesel had inifinitely more interesting histories than warships. One sea battle is pretty much like another, and in between, it is just a boring round of drills and discipline! ...
Bob[/QUOTE]
Bob
Having served in the US Navy; nothing could be closer to the truth than what you have said ... hours upon days, upon weeks upon months of drill, drill, drill, and for what? Superiority? We are among the greatests first world countries in the world. (hard to say that these days but ... )

Fear not, there still exists interest in vessels of this type and style. Here is a half model I did of a clipper built in Dunbarton, Scotland back in the hay day of the sailing clippers. 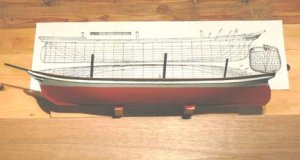 There have only been one or two merchant ships in this section not built by myself in 7 years! - Practically zero interest, I am afraid - What is its name? Bob
Last edited: Feb 16, 2019

She was called the Bonnie Clyde, a ship from the book, A Ships Tale, by N .Jay Young. The book is a work of fiction, so I modelled the half model after the Scottish clipper Annandale, 1854.

Thanks, I have heard of the Annandale. Models of this type of ship are few and far between these days. Here is my half model of the Scottish - built full-rigged ship Peleus. - Bob

shipbuilder said:
Thanks, I have heard of the Annandale. Models of this type of ship are few and far between these days. Here is my half model of the Scottish - built full-rigged ship Peleus. - BobView attachment 79638
Click to expand...

That's a beauty! Looks so very familiar. What scale is it? I did mine in 1:64. Neil has it in his home. The N.Jay Young turned out to be Neil Young the Canadian singing icon, his first novel.