Generic model of The Prince scratch built from plans by Amati, built by neptune.

I started building this model 40 years ago, we had just migrated to Australia and money was very tight so I could only afford the plans and I had to use what ever I could to build the model, I bought the Lanterns and deadeyes, the model cost approx $50 to build 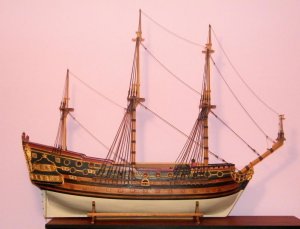 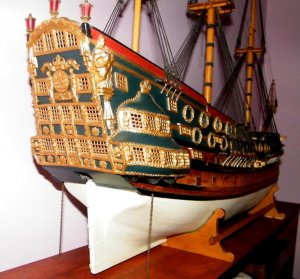 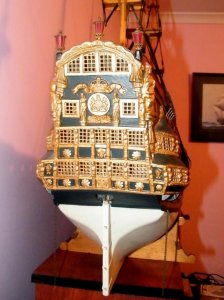 another view of the stern 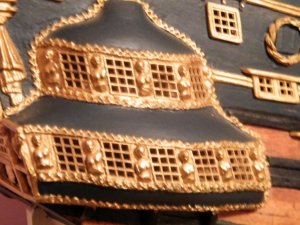 side galleries, the figures were cocktail forks which I cut down and used on various parts of the ship, the windows were a plastic mat that some ladies use to make place mats with, they sew wool through the holes, if you know what I mean
Last edited: Jul 28, 2018

Golly but you are very modest, you sure have built a very fine model ship here that sure is has a lot of very fine detail, much fancier than the little ship the Golden Hind that I am now building, WELL DONE. ENJOY.

Thank you to Mike, Joseph, Lawrence and Geoff, for the nice comments, 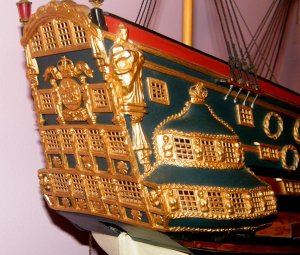 another stern view showing the decoration, I needed a figurehead so I took one from a nativity set, from this figure I made two moulds in plasticene and made two half figures out of car body filler to go on the stern and the full figure I used on the bow, see pic later on.
The drapes and arch moulding and the decoration under the stern figures feet were from Queen Anne type mouldings that were used to decorate white wood bedroom furniture
The crown badges were plastic buttons. 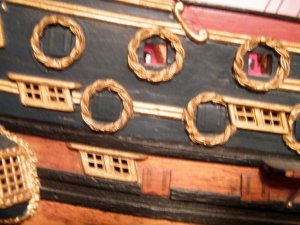 close up showing the port wreaths which were made out of Xmas wrapping cord, I drew the number of circles I needed on some card board then I cut the cord to size and epoxied it in place, when dry I cut the wreaths free and epoxied them onto the hull.

The port lid straps were cut from watch springs. 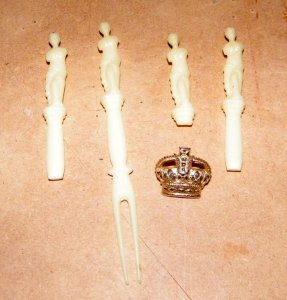 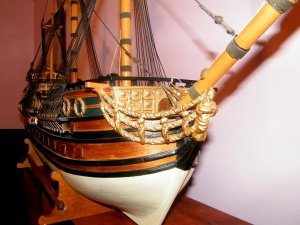 The arches around the doors were belt buckles, the rails were made from furniture decoration mouldings, and the lion masks on the bulkhead were some old billings fittings I had.
Last edited: Jul 28, 2018

These next pics are just general views of the bow 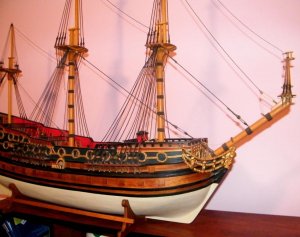 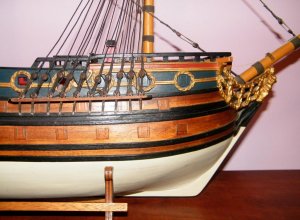 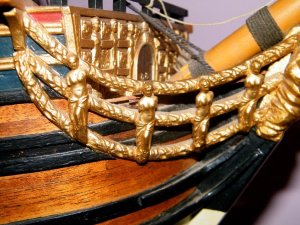 Close up of the head rails, all these figures etc were attached with CA Glue, still there after 40 years. 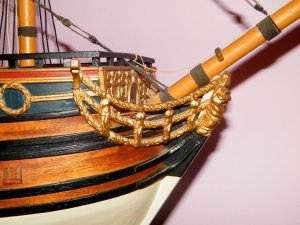 All the stanchions were the turned tops of tooth picks, I'll see if I can find one and take a pic of it, but I'm sure you know what I mean, she sure could do with a good dust off. 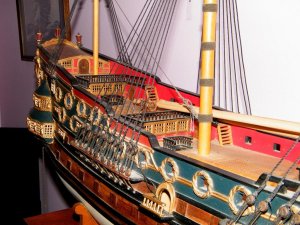 and she has a wheel which the real ship would'nt have had, but I did'nt know that back then 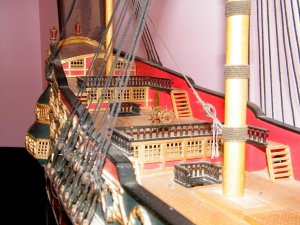 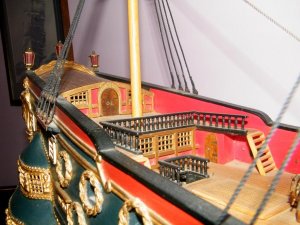 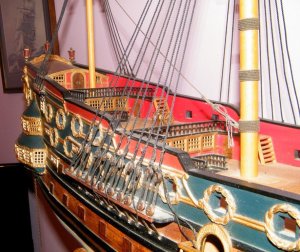 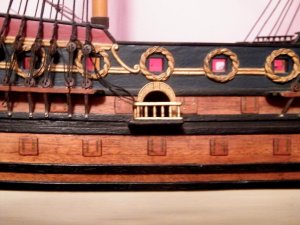 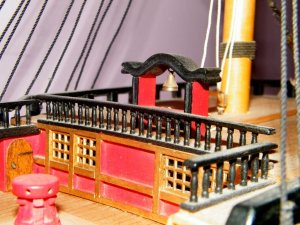 The ships bell was from a ladies earing, and the belfry was the first bit of carving I had tried, I think I will leave the carving to the profesionals, ie Janos,
Well thats all I have for you on this one, I hope you have enjoyed my little trip back in time, I know I have, so to all that have viewed and to those that will view, I thank you all for dropping by,

You just keep on amazing me. Well I will even say everyone here.

You sure are a genius in being able to take any thing at all and turning it into a thing of beauty with seemingly little or no effort on your behalf. You sure have built a ship of beauty that has stood the test of time, WELL DONE.

What ever happened to the ships rudder and are you planning on replacing it, it sure dose stand out on such a beauty, ENJOY.

Sorry Lawrence, I some how missed your post, still getting used to the Forum,
Yes I still have the rudder, I have to get around to replacing it one day, but thank you for your lovely comments,

All photos re posted and up to date,

Very high quality work. A model to be proud of.