So many comments and likes! - I'm overcome!
Thanks to all for your encouragement - it is much appreciated.

I had serious doubts about my ability to paint the frieze, but thought I would give it a try, as I could always paint over it if it looked terrible.
I actually followed the directions given in David Anscherl's book on Swan class sloops, and started by taping a photocopy of the frieze shown in his book onto the hull just below the position of the actual frieze panel.
I then painted the panel with Admiralty Paints, Dark Blue. The basic shape of the frieze was then filled in with a mix of yellow and earth ochre following the pattern and my own imagination. Highlights were added using yellow ochre and a dash of white, and shadows were introduced using earth ochre with a dash of black. The overall idea is to give the frieze a sense of depth.
When painting the highlights and shadows, decide where the light is coming from and be consistent.

Tony; Sadly, Bob Hunt sold the rights to produce his kits to an outfit called Royal Shipyard of Plymouth some years ago. They were going to take over production of the kits, but it never happened, and they now seem to have disappeared off the web.

One thing to note - I have found that as the build nears it's end and I'm doing more of the fiddly bits, that the errors you have made earlier come back to haunt you. Consequently, you might find that the pieces in this or any other kit don't fit as well as you would like, and you have to start scratchbuilding in earnest.
This is not a reflection on the kit, which is brilliant, but all the headworks, most of the stern, and lots of other smaller parts have been scratchbuilt. 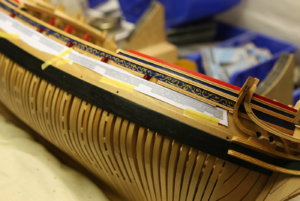 DocBlake said:
The frieze painting is spot on. Great job. I have a Kingfisher in my stash...I doubt my ability to do justice to the painting.
Click to expand...

Dave, you already have the skills to do it! - Better start building - Remember SABLE!!!

I agree, Ted. While I havent started Kingfisher yet, I did complete Bob's Armed Virginia Sloop. Very much scratch building involved.

Hello All,
I'm sorry I have not posted any pictures since mid-September. SWMBO (Ann) has been very unwell for the last two months, and most of my time has been spent looking after her.
However, I have managed a bit of work on King's Fisher, and she's very nearly complete. All I have to do is sort out her figurehead, decide what pieces I will put on the base (cannon, anchors and so on) and do the big clean with compressed air, brushes and vacuum cleaner!
I'm currently working out the best way to light her when she is sitting in my full height bookcase - LED light string appears to give the most even light (and the coolest), but I need to recess them into the shelves top and bottom so you can't see the actual lights.
Anyway, on to some photos. 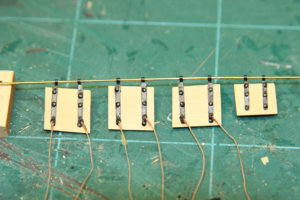 Gunport lids. The odd-shaped lid on the right with the out of line straps is for the small port in the bows. 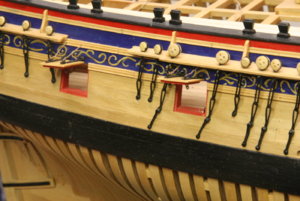 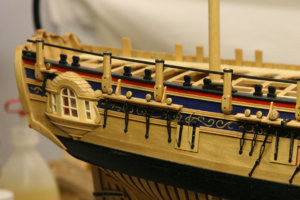 Standards to hold the hand-guns, channels and dead-eye strapping. 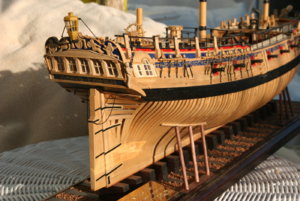 Set up on keel blocks, with shoring to keep her upright. 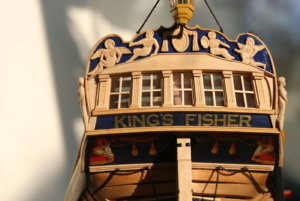 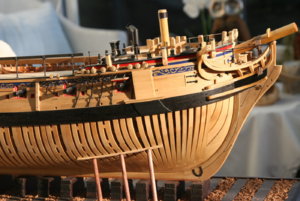 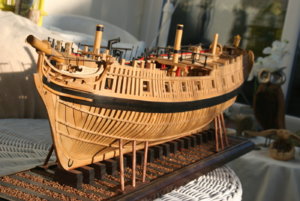 Port side of sharp end. The boxwood with sealer giving just the tone I wanted 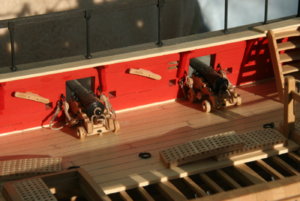 The whole reason for the ship - the cannon.

Fantastic Ted. But of course it is!

Amazingly awesome work , Ted...as always. We’ve come to expect this of you. You set a high bar.

Nicely done work Ted, I like the way you rigged the cannons, neat and tidy, thanks for showing.

Outstanding Ted, beautiful work on what appears to be a first class kit. Pity its no longer available.

Looking very good - with a great appearance - everything fits - Very good work.
Do not forget to show her finished

Apologies Ted,I am very late to the party.I can only echo the comments of others.This is stunning work and you should be very proud.

Again, many thanks to all - your kind comments encourage me to go on!

I am kind of awe struck, WOW, does not do justice to this build. You are a true craftsman! Anyone can build a kit, however, not everyone can create a work of art. Now, is this a kit or plans, I mean did you have to make that amazing jig, or was it part of the kit? Anyhow, I am honored that you have commented on my amateur builds.

SigEp Ziggy said:
I mean did you have to make that amazing jig, or was it part of the kit?
Click to expand...

Love your enthusiasm Shane!! Ted is one of the old Lauck Street Shipyard Bob Hunt crew. His Kingfisher is an amazing build of a fantastic kit that is no longer made!! We all gaze with awe at his many pounds of boxwood in this build!!!

Many thanks Shane!
As Mike says, the kit came from Bob Hunt at Lauck Street Shipyard about ten years ago (Yes, it has taken me about seven years to build it!)
To my mind the use of boxwood really 'makes' the model - it means edges are sharp, and no 'furring' of surfaces.
Glad you like her

Amazing build! I did a decent job with Hunt‘s Fair American, but the level of detail and complexity of your Kingfisher makes it seem like a rowboat in compariso. Truly exceptional!

Thanks Gentlemen!
Still working on her, but concentrating on the display shelf and lighting at present

Ted, Ted, Ted!!! Don't care much about your shelf or lighting!! But, I do need a dose of your Kingfisher!!

mrshanks said:
Ted, Ted, Ted!!! Don't care much about your shelf or lighting!! But, I do need a dose of your Kingfisher!!
Click to expand...