"I have a dream..."
These words by Martin Luther King reflect my relationship with the MSW project and HMS Triton very well. In 2007 and 2008 I gained my first experiences with wood during the construction of my cross-section model. In early 2009, after the publication of the plans for the "Full-Hull" model, I laid the keel. In contrast to the group build, I wanted to build my model right from the start with the original frame design according to the disposition of frames plan.

I had hoped to be able to realize the other frame arrangement with the drawings of the MSW project.(@Uwek: I think, you remember Uwe) Only for the cant frames would changes have been necessary that could have been made with the MSW drawings. This assumption proved to be wrong, after two unsuccessful attempts I broke off the project with a heavy heart.

Nevertheless, the project and the model never let me go. At the end of 2017 I restarted the project with an inventory:
In the last few years I was able to get some experience in the reconstruction of a layout according to original plans, so I decided to do my own reconstruction of the ship.

Note:
My goal is not to criticize the work and the MSW project. A few people invested a lot of energy and work to provide the community with documents for building a model of an 18th century English frigate. I respect this work and will use it as much as possible for my model.
Last edited: Jun 28, 2019
A

HMS Triton with its sister ships HMS Boreas and the HMS Greyhound belongs to the modified Mermaid class, which is based on a design by Sir Thomas Slade (1703-1771), the designer of the HMS Victory.

The NMM has a complete set of plans for a reconstruction of the ship:

For the HMS Greyhound I have not found an As Built Plan.

If you compare the Sheer and Profile As Built Plan with the design plan of the class, two changes are noticeable:
The As Built Plan of the Boreas still shows these details. Therefore, I assume that my reconstruction will be based on a change made during construction.
A

Last year I have reconstructed the lines of the HMS Triton based on the Sheer and Profile As Built Plan. For the reconstruction of the frame lines I used exclusively circular arcs as in old times. Unlike the procedure at that time, I controlled the lines not only with diagonals, but also with a series of horizontal and vertical lines. 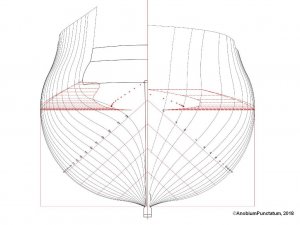 Location of the decks

If one looks at original plans of English ships, one sees that the decks are mostly represented with 3 lines:


The middle and lower lines indicate the curvature of the upper edge of the deck beams and thus of the deck. If I have understood the procedure for the construction correctly, the lower line shows deviations from my reconstruction, especially in the area of the cantframes.

I took the position of the decks in the middle line from the "Sheer and Profile Plan". The longitudinal curvature of the decks was reproduced with two arcs; in the area of main frame I used a short intermediate straight line.

In the "Shipbuilders Repository"[SR] and in "The Element and Practice of Naval Architecture"[EPNA] all important measures for the construction of the decks are given, which I compared with the values determined by me from the original plan. As you can see, there are differences between the theoretical dimensions and those used in the construction of the ship


The value "Beam to round up midships" indicates the curvature of the deck. Whether the value to the bow or stern must change, I could not determine. The specification refers to the maximum width on frame. The following sketch shows the procedure for determining the value on frame: 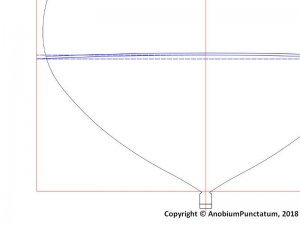 Afterwards I added the deck beams and the openings for all decks: 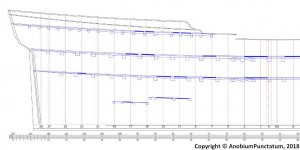 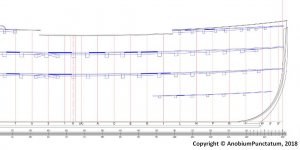 For my reconstruction I followed mostly the original design. I thought a long time if "Shipbuilders Repository"[SR] or "The Element and Practice of Naval Architecture"[EPNA] is the right choice for the work. Lastly I followed EPNA, because more details of the drawings have the same meassurement.
For my model I think I have to simplify the dimensions. In the choose scale of 1/48 are the difference of the frame width very small.

All parallel frames are finished. After the reconstruction of the cant frames there are some adjustments for the timber heads necessary. 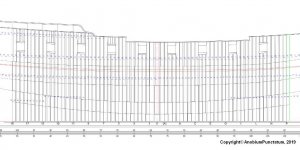 The drawing shows the 3 thick frames at station 0. This is very special for this class. I didn't see this on any other DOF drawings

Hallo Christian,
I am very happy, that you started this building log and that you explain about the basis and all available information of your project.
Especially due to the fact, that I know the "vessel" very much I am highly interested in your work......Crossing all the available fingers and toes that this model will grow and finally executed also in timber.
And I hope, that you will inform us on regular basis of your progress - very interesting project

Hello Christian,
I am echoing Uwe, a very interesting project and I am happy to watch as your progress in your build. You mention in your signature Alert 177 (on the drawing board), do you have plans to build this model someday?

@all
thank you for your interest in my project

@Uwek
I hope that I can start with timber at the end of this year. After finishing the cant frames I will stop the design fase and start with the build. I will draw each frame and then build it to make the job more interesting.

And I hope, that you will inform us on regular basis of your progress
Click to expand...

If one update every few month is on a regular basis, I'll do. For job reasons I don't have much time to work in my shipyard.

You mention in your signature Alert 177 (on the drawing board), do you have plans to build this model someday?
Click to expand...

I hope that I will build the cutter. In the moment I stopped this drawing project. It is a learning project for me. There are a few things which I could not find out, the most important: which kind of frameing was used? Only single frames, double frames or the English frameing (as Trident use for their kit)? Therefore I thought that a stylized framing as on the Marshal painting and other historic models shown is a good option. I also like to plank one side of the model, to show the klinker planking?

The Trident kit is looking like a nice alternative and to add and change parts if necessary.

It took me a long time, but now I have finished my Disposition of Frames drawing. I found it really difficult for the timberheads, which were shown in the AsBuilt drawing, to find a possible position of the frames, especially for the cant frames. If you think that there is a better solution, please let me know (for a larger view, klick on the drawing). 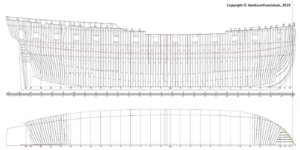 Next I will start, drawing the parts for the keel and the frames and also conitnue wtih the profile drawing

Hallo Christian,
we wish you all the Best and a HAPPY BIRTHDAY
and also that "your dream" from the first post of this topic will come true

Thank you very much, Uwe. I think I need a lot of time and years to realize my dream model.

FROM ME TOO. Don

Happy Birthday, Christian, and many more years to come! Enjoy your special day!

Thank you very much.
A

A short update from my work of the last months.
I have drawn the frames out of the line drawings. Meanwhile all parallel frames and the front cant frames are finished. The two pictures show once the outer contours and once the inner contours. On the basis of these two overviews the individual frames are checked. 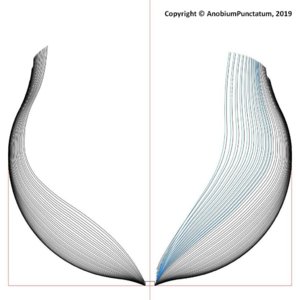 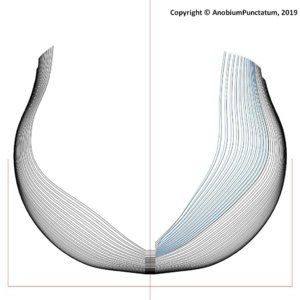 Hi Christian
This is a very interesting and challenging project.I look forward to following along as you continue.