I would like to know the correct way to install a mouse on a stay.
I thought the narrow end went against the loop. 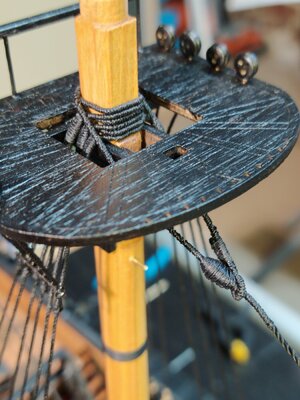 I saw a model with the mouse the opposite way around. When I checked against Historic Ship Models it looked like I was wrong.

Today I checked some other books and cannot find a definitive answer, some show a round mouse but there are a lot of models with the mouse like mine. Can anyone suggest which way is correct.

I think that one on the sketch (second picture) is right, but at the end who cares? WHATEVER mouse looks better than no mouse. Actually I am doing the muse the way you do, too, ie. served in lieu of woven. Even the served one is too complicated for a pale face...
János

The loop fits over the wide end of the musing. If worn narrow, the loop may come off. 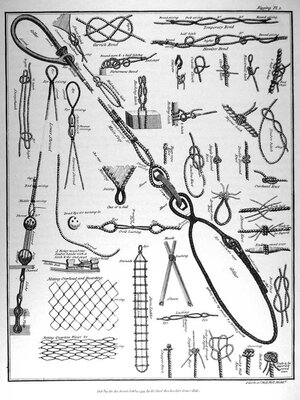 The Elements and Practice of Rigging And Seamanship A Mouse in the Rigging - USS Constitution Museum

Unlike the well-known furry variety, USS Constitution‘s many mouses are lumps of line and canvas built up on the outside of the diagonal stays that run. . . 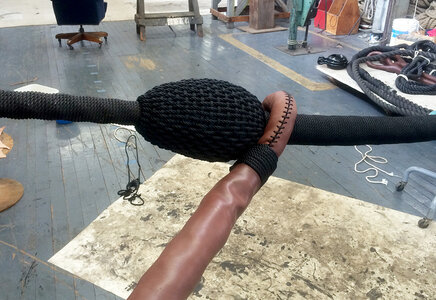 Build up the headstock to an approximate musing shape,
pear-shaped part down, wrapping it with cotton wool, and tie two
thin rings of thread above and below this thickening. Then take
a needle with a long thread with a knot at the end and, starting with passing
her through the head, pass the thread through these two rings here and there,
until the entire surface of the thickening is not tightly closed
longitudinal threads. Then, starting at the other end, so that
it turned out an odd number of longitudinal lines, skip
thread in a circle under and above the longitudinal lines, as if darning.
Finish by making a few stitches around the headstock and tracing the end
times or a couple of times through the strands of the headstock itself.

A big thank you for the feedback it looks to me the mouse can go either way around. I have checked a few books and models and it's 50/50 so let the modeller decide.

Steef66 said:
I made before a video how to make a mouse on the serving tool

Fantastic work, I've still got a lot to learn but will try your method it looks very good. Do you place the sharp end pointing down or up?

Tony H said:
Do you place the sharp end pointing down or up?
Click to expand...