Thanks for your reply but I would need you to send a wall to me as well!
Not much room left but I can admire your gift!!!!!
Paul

I understand, but a virtual wall is not what I can deliver .

Ab Hoving said:
Well, thank you all for your kind words. I hope I won't disappoint you with my simple paper products.
Since a few years I build my models in paper, just because it is fast, cheap and easy and it makes much less debris, which keeps the admiral happy.
As a test I tried my hand on the pinas, described by Nicolaes Witsen (1641-1717). You may know that I wrote a book on that ship, as mentioned above. I made several models in wood of this ship and it was pleasant to find out that, though a 1/50 model in wood took me three years to build in the 80's, I finished this one in three months.
View attachment 139248
After that a lot of small crafts followed. I planned building them a long time ago, but could never find the time.
Here are models of a kaag, a 'wijdschip' and a 'smalschip', just to show a few. They are all genuine old ship types and they were fun to do.
View attachment 139249
View attachment 139250View attachment 139251
Things became even more fun when my son suggested to make photoshop-paintings from the models. That resulted in things like these:

Then I am afraid I lost my good intentions to only make smal and simple ships, because we wanted to make sea battle 'paintings' too. So we did.

Especially the last one forced me to go outside my comfort zone and create foreign ships, which is a little bit against my silly principles. In the mean time some pictures were sold to serve as a book sleeve, some we're used as screen-savers and of course posters were made. Anyone interested can have a file he can print for his private use.
For another book sleeve we recently got a commission, which forced me to build a Mediterranean pirate. I don't have good pictures yet, but at least you can see what I mean. It is a tartan, for which I found a plan in Chapman's Architectura Navalis Mercatoria (1775).
View attachment 139264View attachment 139265

My latest project is another experiment. I try to reconstruct a Dutch galley after a contract specification of 1600. Don't know if that will deliver anything useful...
View attachment 139266
As you can see there are other models I am working on at the same time. Actually there are 6 or 7. I like to only do things I want to do at any moment. I am rigging man-of-war, which takes a long time, so I want other jobs to do if I want to. Don't know where it will bring me.
Oh yes, before I forget: all my models are on a 1/77 scale. I like that scale, not too big and not too small for my clumsy old fingers...
Hope you like it.

Hallo Ab , alias @Ab Hoving ,
we all from SOS wish you all the BEST and a HAPPY BIRTHDAY

Thanks a lot. I’m working on it

Thank you Clair G. These are interesting times to live.
Last edited: Jul 31, 2020

Sorry for missing the date, Wishing you lots of happiness and enjoyment in building the models

Working on it Shota70

OK, the birthday is over, so back to work.
But before I can work on the next ship, I first have to finish a Spitfire I promised to a friend.

Sometime ago my son and I got the commission to make a book sleeve for a book dealing with a Dutch fluit, which was attacked by North African corsairs. Of course the book deals with a lot of other stuff, but this had to be the subject for the picture.
There was a bit of a problem: I hardly ever build anything else but Dutch ships and now I had to make foreign vessel, far beyond my comfort zone...
I used Chapman's book Architectura Navalis Mercatoria as a source for a tartan. 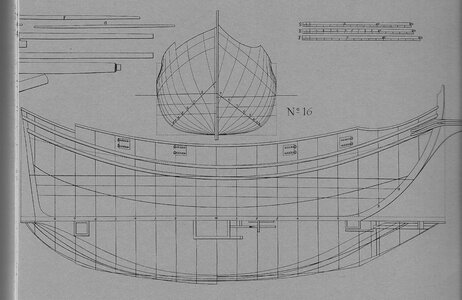 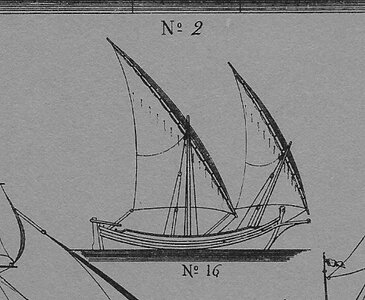 Although I had a lot of questions about details of the vessel I finished the model in a few weeks time without the use of filler, which I normally do. Inspired by Seahorse's method the build was clean and easy. 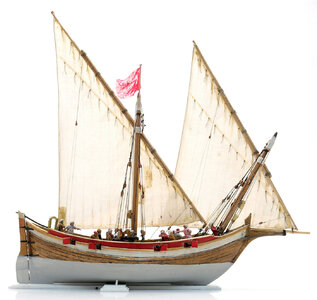 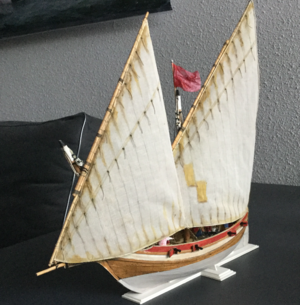 my son took the necessary pictures and produced the picture we were asked for. I think it worked out well. Hope you do too.... 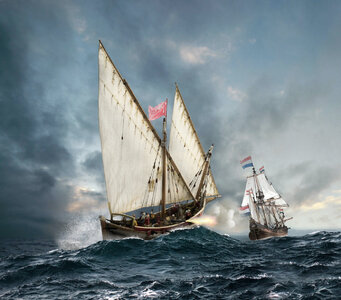 That is a fantastic final product. Congratulations.

this is a really nice little piece of art. I mean both, the model and the "painting".

I'm a little confused about the position of the gun port hinges in the Chapman plan. From what I know and what logic suggests, the hinges at the front ports should be on the left of the viewer and that of the aft ports on the right. The reason for this is that it should be possible to direct the guns in front of the midship bend forward and those behind aft. It is evident that the Chapman Plan shows the opposite of this.
All plans of ships that have the hinges on the vertical edges of the frames and that I know also show them in the way I have described. For example this one: 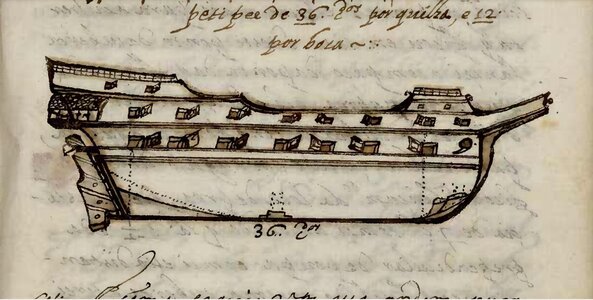 
Do you know the reason for this unusual position? It is hard to believe that Chapman made a mistake here. Of course it may be that I don't know enough of these plans.

Hello Hartmut,
You are a sharp observer.
To tell you the truth I was not aware of any rule for the position of the hinges, partly of course because they only seldom show up, as most of the time gunport lids pivoted upwards. From what I see at the model of the William Rex in the Rijksmuseum the ones in the middle of the upper deck turn according to Chapman's drawing on the Tartan. They cannot turn upwards because there is no way to manage the ropes for lifting. I do not immediately see the reason you give for not getting in the way of the guns, because especially in the midship area the ship's sides are almost straight, so it really does not matter what way the lids open. 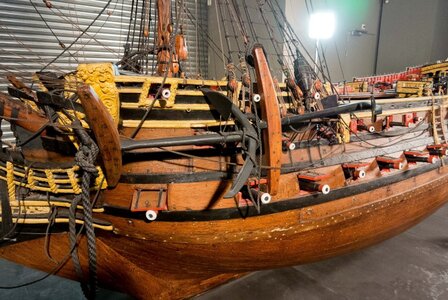