One other thing I meant to mention in my last post is how great the people at Pride of Baltimore are. The Model Shipways plans are very accurate and comprehensive, but nevertheless a couple of things baffled me (it actually doesn't take much,) so on two occasions I emailed them at POB with my questions and in both cases I received a reply right away and one response even included a photograph with an arrow drawn on it indicating the answer to my question. They couldn't have been more helpful.

I have now essentially finished the rigging. I haven't posted during the rigging phase as it wasn't very interesting and it simply progressed in the usual way. 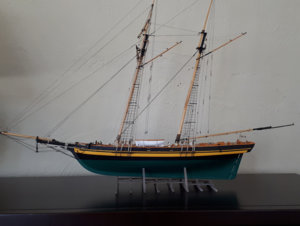 I had one minor setback though. I had the same problem on a previous model, but failed to learn the lesson. I managed to break both the aft cross tree on the fore mast and the long spreader on the main mast. In both cases I had quite a bit of rigging already attached. I attempted to repair the breaks, but the result was pretty bad, so I had to undo the rigging and replace both broken pieces. The lesson I failed to learn is to not use the kit supplied basswood for these parts. There's a fair bit of tension on them and when I caught my finger on attached lines, it was enough to snap the parts. The basswood really isn't quite strong enough. It's much better to use some walnut or other hard wood for these parts which is what I did for the replacements. I suppose it would also work to use some very thin sheets and build up the thickness plywood style. I definitely will not forget this next time around.

Three jobs left to do - add the rope coils on the belaying pins - touch up the paint in a couple of places - and add the rope railing that runs along the top rail. It's not included in the kit, but I found some really great stanchions for it at Cornwall Model Boats.

I opted to omit the netting that hangs below the jibboom. I know that I simply couldn't model it in such a way that it would enhance the model, so I just left it off.

This model has two turnbuckles which are placed just aft of the fore mast near the top. I've seen several methods for making them on-line, but I don't really have the metal working skills required and in most cases I think the results tend to look a bit bulky and over scale, so I made dummy ones by sanding down a dowel to a very small diameter and adding a small eyebolt at each end. I think they fit the bill ok and are scaled according to the plan. 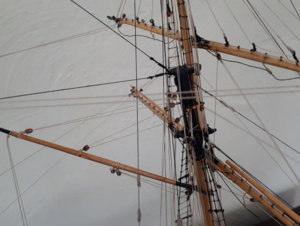 I always struggle a bit with some of the running rigging when not using sails. The plans show the model with sails and there is always a bit of tweaking involved by eliminated some of it and adapting some of it. I'm sure I haven't hit it 100% correct, but oh well. 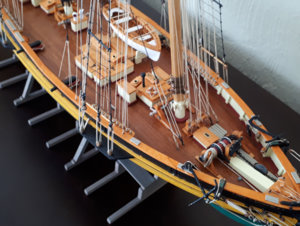 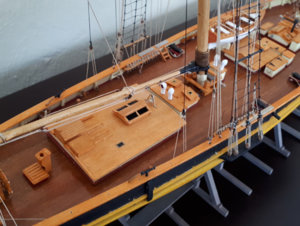 So, I'm really in the home stretch now.

Thanks for your comments and likes.