RogerD said:
I really appreciate your compliment, thanks. I also used many photographs as well. It was interesting how, over those early years, the structure of the ship changed.
Click to expand...

RogerD said:
I thought some of you might be interested in a famous but little known vessel called the R.C.M. Police. St. Roch. The ship is just over 104 feet in length, beam 24 feet 9 inches and draft 12 feet 6 inches with a displacement of 323 tons. Before I go much further, and especially for my Canadian friends, I would point out that the name on the hull is indeed as written.

The St. Roch (pronounced “Rock”) was the second vessel, after Roald Amundsen's Gjoa (1903) to traverse the Northwest Passage from east to west. However, she was the first vessel to traverse the Northwest Passage from the west to east. The ship still exists and is proudly displayed in the Vancouver Maritime Museum, in Canada. The story of the St. Roch is fascinating so rather than attempt to write my own short narrative I feel it better to provide a paragraph from a Commemorative paper by Len Canfield and then the complete 16 page document, link below.

Some of the most intriguing aspects of this famous little ship and her RCMP crew are audio recordings made by key players involved with the St. Roch. Listening to the recordings is definitely a step back in time. The link is provided below.

I had a lot of fun building this plank on bulkhead (POB) Billing Boats kit and worked slowly away at it for a couple of years. I recently finished the final small parts of the build and, with the completion of a basic stand, I feel I have a reasonable rendition of the vessel. I added some extra fixtures and fittings here and there but generally it is “as is”. I took some photos of my model, which I will add later to the SOS Completed Models section. However, I’ve attached a couple to give an idea of her size.


Commemorative document by Len Canfield
“When the RCMP Arctic patrol Vessel St. Roch slipped quietly into wartime Halifax Harbour October 11, 1942 few Canadians were aware of what this small ship had achieved since departing Vancouver in June 1940. The eight-member crew of the 104-foot St. Roch, under the command of Sergeant (later Superintendent) Henry Larsen had completed the first west to east transit of the fabled Northwest Passage (NWP). It was a remarkable achievement: a story of how the St. Roch had spent two winters frozen in ice and how the persevering Larsen and his crew had overcome the worst ice conditions in years to finally reach Canada’s WW11 ‘East Coast Port.’ It would not be the first or last of such achievements for the St. Roch launched at North Vancouver in 1928. Over the years the ship’s contributions to Arctic exploration and northern development have captured the hearts and minds of seafaring Nova Scotians and Canadians everywhere.”

Hi Roger. I have just joined the group. The St.Roch is my first model. I actually built a few others, but almost 40 years ago, before kids, marriage and a busy job. I am now retired and also with Covid, have a lot more time, so I have returned to my old hobby. I realize that the Billings Boat instructions on this kit are quite skimpy, so I hope you don't mind if I reach out from time to time for tips and hints. Even though I did build a few models, it was so long ago, that what I learned then is lost in the mists of time. Cheers, Carl (username: Carleroo) from Toronto.

Firstly a warm welcome to the SOS forum. It is a remarkable site with some very knowledgable and experienced builders. For a novice like myself I think you will get and enjoy a lot of constructive help and advice from everyone.

I thoroughly enjoyed building the St. Roch. Like you I too built a few models many years ago and then returned to the hobby just a few years back. I would be pleased to offer any tips that might assist your build. I mentioned in my posts that I used many photos of the St. Roch from the Vancouver Maritime Museum as well as historical images found on the Internet. Even though the Billing Boats instructions are limited I stayed generally to their build but added some extras here and there.

One thing I would suggest from the get-go is to start a build log. That way you can be assured SOS members will support and advise you as you progress.

Hi Roger,
Thanks for your quick response. I will start a log and look forward to the advice of other members and yourself.. If you had a build log for the St. Roch, how would I access it?

Hi Carl, no log I afraid. I had mostly completed the St. Roch by the time I joined SOS, except for the last few small items. I didn’t take photos as my build progressed, which I now regret of course . However, I have some downloaded photos of the actual ship that may help you later on. Plus a few other shots at different angles of my model.

Hi Roger. I did find your photos after searching the site. It is an amazing job - fine details and very realistic. I notice that you painted (stained?) the deck a reddish colour. I would like to do something like this. can you let me know what you did?

I tried to match the colour of the deck from a photo of the St. Roch from the Vancouver Maritime Museum. After I laid the decking I primed then brushed on a Vallejo Model Color #70.982 Cavalry Brown. I think I put down two coats. 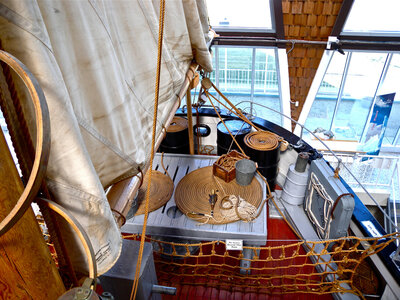 Second photo of my “near enough” colour match on my build: 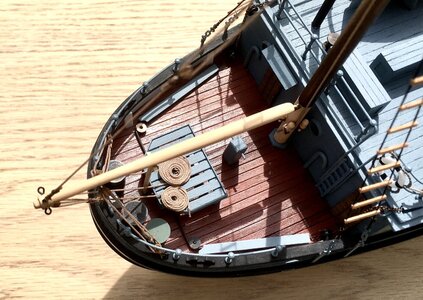 Many thanks. I notice small gaps between the deck planking? Did you lay it that way or did you somehow do something else to show up the edges?

Hi Carl,
The decks in the photos I have show a visible chamfer/bevel. I experimented with a few plank offcuts and then went with a slight rounding of the deck plank edges to simulate the same as the original. 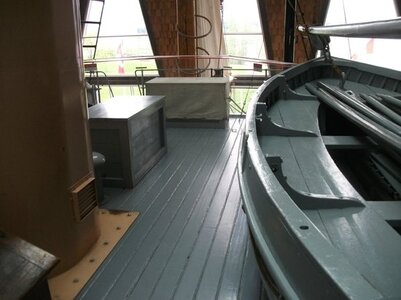