In the middle of rigging the San Felipe could someone who is knowledgeable on rigging tell me which is the correct way,
On the rear mast I see that the plans show no lines that would hold the sails when they were up and stored, but surely on this mast its impossible to have a sail underneath, ive looked at a few examples and some have it and others don't, which is correct ?
Or are these line really for access and walking along for the crew so they are also needed on this mast even though it wouldn't have a sail underneath it?
Sorry for my lack of knowledge on this. 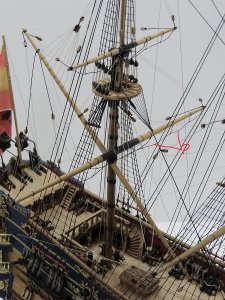 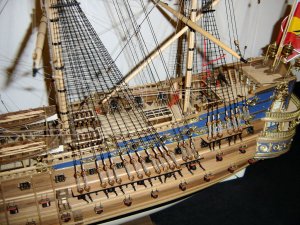 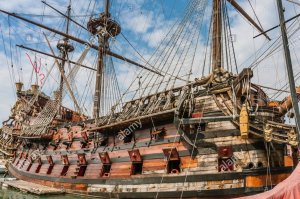 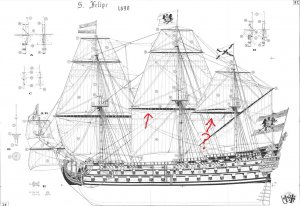 “[Our frigates] should combine such qualities of strength, durability, swiftness of sailing, and force, as to render them equal, if not superior, to any frigates belonging. . .

I have reread your question and it is a very valid point.Why would you need footropes on a spar that has no sail hung below?In short,I don't know the definative answer but I would follow Lusci's drawing and omit footropes to that spar.

Thanks for the comments, I will leave them off and follow the plans it htink

Alternate opinion on the footropes...just because a spar had no current sail does not mean the spar should not be fully rigged to receive the sail. Thus you could add the footropes and be fully correct. Also remember that rigging was easily changed to accommodate the preferences of the Captain. If a spar was not being used then perhaps strip down the rigging. No set rule on this. On...off...both are equally correct and acceptable. Personally, I would rig every spar as ready to receive sail...so footropes on!

Yes. Actually most all rigging is still in place very much so the foot ropes. These types of things STAY rigged regardless. It is considered a permanent fixture. If the sails are furled or even tightly hauled on the yard, then ALL normal full sail running rigging REMAIN in place. If sails are completely removed, then the only running rigging sail management I would remove are the clew lines, leech lines, and bunt lines. The braces also stay as a permanent fixture.

This lower yard was only used so the mizzen topsail has a point for the corners of the sail to be hauled into. A sail would never be rigged on this yard due to one the lateen mizzen of this period would make it unable to be rigged. Also in later periods. With the spanker mizzen sail - gaff rigged mizzen a mizzen course - lower sail was not usually fitted. The foot ropes are possibly rigged purely for ease to get out to the yard end if the sheets and tacks of the topsail were to become stuck etc at the block on this yard. However, foot ropes only really appeared throughout Western Europe in the early 18th century. Prior to this, it was rare to see them on continental Europe built ship’s as it was an English invention. Prior to this to loose a sail, sailors would shimmy out on the yard itself. This practice I’ve done myself on the Duyfken replica as she being a Dutch 16th century ship does not have foot ropes. But as for sails on this yard, no it wouldn’t be rigged for it at all and for the foot ropes, you could easily omit them and it’ll be correct.
You must log in or register to reply here.
Share:
Facebook Twitter Reddit Pinterest Tumblr Email Share Link
Top