Thanks guys. My surgery went well. I am on day 2 of my recovery. Will be in a sling for a few weeks so no shop work. In the meantime, I am focusing on a bunch of CAD and 3D work on the computer. I will be sharing progress along the way. I have a LOT of very cool parts in the works!!

Glad to hear everything went well, Mike.
I was preparing to have my knee replaced when all this Covid stuff got hot again. So, now will have to wait out the Covid and my increasing knee pain. I still love watching you all's builds and plans.
Jeff

Nice hearing from you Jeff!!! Been a while!!!

Yeah, I have missed chatting with all of you. Going through some rough patches as are many others at this time. Hope to stick my head in here a bit more often.
K

As we say here in sunny South Africa .......vasbyt China .....translated means " bite down hard my pal"
I've had 3 of those shoulder Ops after multiple dislocations incurred during off road bike racing ,boxing rugby etc .
Take heart from a fellow sufferer ....I tell my mates who've had these Ops .......it will after a while return to near normal !
I know ...I've been through it and at 67 ...am still surfing and still riding my beautifull worlds best KTM 300 ...
Vasbyt mate !

Now the challenge will be to listen to the doc and physical therapist to not rush things and get a good recovery first time around as I assume that you don't want to do this again, at least very soon. Take this as planning and prep time for completing or starting your builds. PT-2
M

Thanks guys. It is going better than I expected. Only 3 days since surgery and my shoulder is already less painful than before surgery. I have my first Physical Therapy appointment tomorrow. Oh joy... maybe they will have donuts...
M

@Kennyb In addition to my 3 motocross race bikes, here are my other off-road toys just for riding fun.... these along with motocross racing might explain some of my MANY injuries (shoulder surgery, knee surgery twice, broken scapula, 3 broken ribs, concussions, epilepsy)... I also used to road race in Germany back in the 80's. 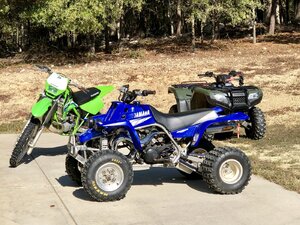 Clair G said:
I see lots and lots of future ship models in the background
Click to expand...

Oh yeah.. we live on a 53 acre farm surrounded by over 2 miles of wooded trails. The backside of the property rests along a river where we have a shooting range. We share the property with our friends, he is an ex-pro motocross racer (with 3 bikes) and currently builds/flies R/C planes. He has his own R/C landing strip on the property. His son is a commercial pilot. Our houses are 1/4 mile down a private gravel road. Lots of deer here and as few humans as possible!!

Wow man, that sounds sweet. Everything is conjested here, here's a pic of my auto repair shop just behind the house. Property ends
at that rickity fence wayyyyyy back in the forground. lol 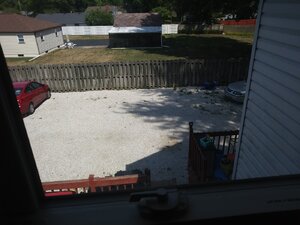 PoulD said:
Have you noticed that Harley riders don't do it?
Click to expand...

I forgot to comment on this. That used to be true but no longer... at least not here in the States. Street riding all changed some years ago... it is now very common to see Harleys riding with Japanese sportbikes, alongside BMWs, Ducatis and dual-purpose bikes. The diversity bug finally caught up to the biker scene!! All motorcycle riders wave at each other now... to ride, is to ride.

You cannot have enough toys...well...and tools!

I rode a Yamaha MX175 when I was a teen, and years later, on a sort of a whim, my buddy talked me into buying a CR500.
I told him "What do I need all those CC's for?", and he said "Well it weighs almost the same as a CR250, so just don't turn the throttle all the way open if you don't want the power".

I went to the dealer and pointed to the CR500, and said "I want to buy that bike".
The salesman said "You don't want that bike; its a man-killer".
That got my attention.
I said "Yes I do".
Back in the day, they let you sign a waiver, and do a test ride, and I did just that, and was really intimidated.
The test ride went well, and the bike is so light that it felt like my MX175.

I have been riding it since 2001, and loved every ride.
No crashes (yet), but I ride to live, and I don't throw caution to the wind.
I realize I am no Robbie Knievel, and so it is a matter of staying within the limits of my abilities.

I am turning 61 this year, and I don't break or heal as well as when I was 18.
And I had shoulder surgery a few years ago, from water skiing into the side of a stationary boat.
Shoulder is all good now, and no real damage to the boat luckily; that was many years ago as a teenager (teens have no fear of death).

And I have 40 wooded acres that I bought this year, and will be making an Enduro track (work in progress).

Life is good and no virus so far (knock on wood).
And my CR500 is in pristine condition, with little wear on the original tires (have not had much time to ride, or place to ride).

Good luck with your shoulder.
My doctor said don't lift anything for I think 8 months, or some long period, and he said if I did, we would have to start all over with more surgery.
So I took it easy, and have not had any more pain.

SteamRUs said:
I have been riding it since 2001, and loved every ride.
No crashes (yet),
Click to expand...

Sail on AND Ride on!!

LOL, well I worked with a guy for a while who raced a CR250, and he was having surgery after every race, and so I vowed (after the skiing incident where I tore up my shoulder) to not break myself again.
So I ride it a bit like a little old lady, but I have had the throttle wide open.
Hard to hang on with the throttle fully open; it starts sliding you off the seat, no matter how tightly you grip with your legs.

And I did not want to bend the bars or frame, since bikes never quite track correctly after that, and I can feel a bent bike when I ride it (I had one of those).
So I ride to survive, an no racing, or no "official" racing anyway.
Seems like those informal rides always turn into an unofficial race.
I can remember many times riding with a group on my 175, and I would go to shift to a higher gear, and it would not shift, and I would realize that I had the throttle fully open, and was in 5th gear (which for a 175 is not really that fast).
With the 500, I basically accelerate in bursts, where you pop the throttle open for a second or two, and then back off, doing that repeatedly.
Holding the throttle open for more than a second or two (depending on the gear) is risky on a CR500.

Had I know that it was the last year the bike would have been available, I would have bought two of them.
I guess one is enough though.

I live in TN, but intend to set up for riding in Arkansas.

Looks like you are somewhat within driving range, so perhaps one day we will meet up and ride, virus allowing.

Edit:
I really love the feel of a CR500; it becomes like an extension of your body, and feels featherweight compared to fourstrokes I have ridden and own.
And if I get into trouble, I can lock both wheels and slide to a stop, regardless of how fast I am going, or pretty much regardless of the terrain, except loose rocks and such.
Some of my other bikes will do a 180 if you lock both wheels.
And if the bike gets out of whack, and gets all sideways and stuff, just let off the throttle for a second, and it will straighten itself out quickly.
It is a very nimble bike, and a real joy to ride. No bad manners at all, as long as you lean forward.
.
Last edited: Jul 28, 2020
M

By your description I can definitely say you ride a CR500.... HAHAHAHAHA. Everyone that has one says the same thing!!

mrshanks said:
TN eh... I went to the National at Muddy Creek the last 3 years....
Click to expand...

I will have to look that up.
I don't get out much these days due to work load, but I would like to see that.

And a funny story about when I was first trying to learn to ride the CR.
The CR500 has a tiny flywheel, and no torque from a standstill.
The throttle is basically on/off, zero hp or 55 hp.
So I was trying to ride it like my Yamaha 175 enduro, which does well just poking over rocks and things.
No dice, I could not do much of anything with the CR but stall it.

So one day I was riding down the trail, and some guy was resting, and his CR500 was leaned up against a tree (they don't have kickstands).
I stopped and said "Hey, how the heck do you ride these things slow?".
He laughed, and said "Oh you don't ride a CR500 slow, just open the throttle and go, go, go".
So I tried that, and sure enough, the faster you go, the better the bike handles.

And I accidentally ran over a 12" log at high speed, and I thought I was going to meet the great dirt bike man in the sky, but I felt a slight bump in the bars and pegs, and that was it. Like running over a broom handle.
I rode fast after that, and just popped the front wheel up and rode over anything and everything. Works like a champ.
.

Ok to date myself my one and only bike was my brothers used Honda CL70 from 1970!