Kkonrath said:
Ok to date myself my one and only bike was my brothers used Honda CL70 from 1970!
Click to expand...

I started riding my 175 dirtbike around 1975 I think.
I use to ride it around town, and rode it to college one day, and chained it to the rail outside the English building.
Nobody said a word back in those days, and I did not have tags on it or anything.

Below is my CR.
I bought a Honda CB500, and rode it for a few weeks until I crashed it in a ditch.
That cured me permanently of ever riding a multi-cylinder bike of any kind, and a street bike of any kind.
But I had a friend who had a Yamaha TT 500, and it was like riding a tractor; you could literally plow a field with it, with its torque (The TT was similar to the photos attached below, but without the lights and such; not my photos of the XT). 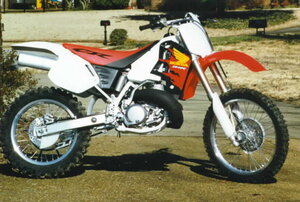 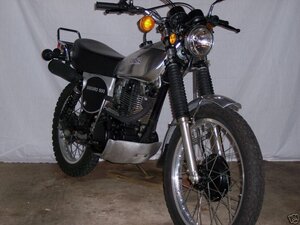 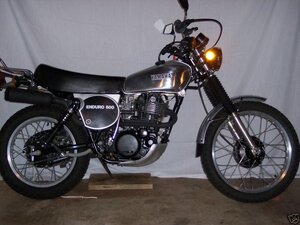 I always wanted to buy a TT500, but they all looked worn out completely.
I did find a nice SR500, and so I bought that cheaply on ebay.
I stripped off that dumb seat on the back.
The torque curve on the SR500 is completely flat across the rpm spectrum, and the bike basically runs like a hairy ape.
Need more power? Just open the throttle at any speed, in any gear, and hang on because you are going to go.
But I don't ride it on the street.
And the wife was none too keen to have it in the entry hall, but where else would you keep such a pristine bike? 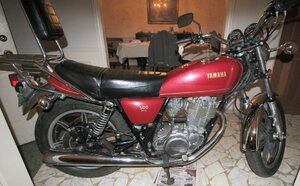 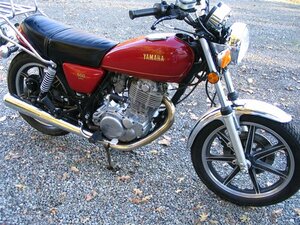 And I remember going down to the local motorcycle shop and marveling at the new Nortons.
He had a whole lineup of them on the showroom floor and several still sitting in crates.
I really wanted a Norton 750, and still do.

And the advertisements were dreamy too !

A guy down the street had one, and he would wheelie down the street, and go through every gear.
Times were different back then, and you could pretty much do what you wanted as long as you did not hit anyone or anything. 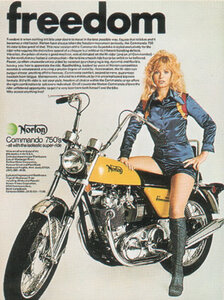 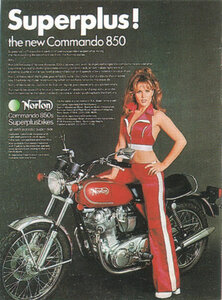 Said I can have a Harley if I want!

But that would cut into my hobby budget!

mrshanks said:
Thanks guys. My surgery went well. I am on day 2 of my recovery. Will be in a sling for a few weeks so no shop work. In the meantime, I am focusing on a bunch of CAD and 3D work on the computer. I will be sharing progress along the way. I have a LOT of very cool parts in the works!!
Click to expand...

hi Mike
Glad to hear everything went well, and thet
you are receiving & feeling well
M

Mike, I'm glad you are recovering well, and it's great you are using your time to learn CAD. I'm impressed with everyone's motorbikes. My sport is bicycle riding, and and my 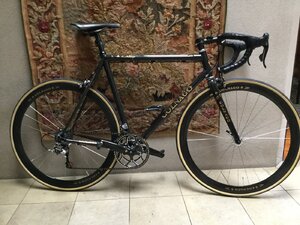 other hobby besides ship modeling is to collect and refurbish vintage bicycles. I have a really superb collection, 32 bicycles total.. One part of my collection is for show only, another group I ride periodically. They are all Italian bikes with Campagnolo components. I have at least one copy of every drive system Campagnolo has ever made. Here is a picture of my latest: A Colnago Gold anniversary model with Campagnolo carbon 10 speed drive train. The wheels are some of the earliest carbon rims made.
Great to see all the interests and hobbies SOS people-a balanced life !
Cheers to all, stay safe
Alex R

Very Impressive. Alex! Where do you store all 32 bikes?
M

Jimsky said:
Where do you store all 32 bikes?
Click to expand...

Thanks Alex. I am recovering well. One week in a sling... 5 more to go. I get my stitches out tomorrow. I also ride bicycles for "motocross fitness training". But no where near your level. I have a Trek mountain bike with many hundreds of miles on it.
D

OH MIKE YOU ARE SOMETHING, HEAL WELL. GOD BLESS STAY SAFE YOU AND YOURS DON
M

Got my stitches out today (only 6 of them). Doctor says I may have sling off in 4 weeks instead of 6. This is very good news. There really is not much pain (motocross riders can take a lot of pain). I have learned a huge amount about CAD and 3D drawing in a very short time and learning more skills every hour. I have a few requests for some small simple parts from SoS model builders and this makes me very happy. I also continue to work on Hahn stern decorations and a very special secret project. All is well!!!

WONDERFUL TO HERE MIKE, STILL NEED TO SEND YOU THE SCANS OF THE STANSIONS I NEED, HAVE TO WAIT FOR MY DAUGHTER HOPEFULLY NEXT WEEK, LOST YOUR EMAIL ADDRESS DO NOT SEND IT UNTIL I CAN CONFIRM MY DAUGHTER CAN SCAN THIS. GOD BLESS, STAY SAFE YOU AND YOURS DON

Im really glad you're recovering so quickly! Best news of the day for me

Jimsky said:
Very Impressive. Alex! Where do you store all 32 bikes?
Click to expand...

A lot of them are on display at a bike shop (Contender bicycles) in Salt Lake City. A few (limited by Admiralty orders) inside my house in Houston, some hanging in my garage, and some in storage.
K

I started with a '69 Bonneville chopper and then bought a new '75 Triumph Trident.
M

Clair G said:
I had 4 all together.
Click to expand...