Hello
This will log my third plank on hull ship build. I am learning that one of the major attributes for this hobby is to go slow. I took nearly a year to build the BENJAMIN LATHAM, but did so in somewhat hurried spurts. The results were varied but usually entailed multiple instances of tear out and redo. Although my skill sets are improving, they are in no way a match for some of the fantastic quality builds I see here at SOS. So with that disclaimer I start on number 3.
I understand that I need to have dialog on each picture post, so pardon any initial foul ups.
I really like this Occre kit. I comes with instructions in English consisting of photographs of build steps and numbered keys to material to be used . 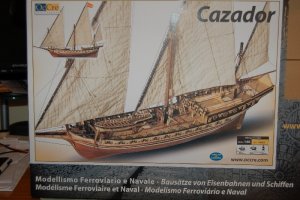 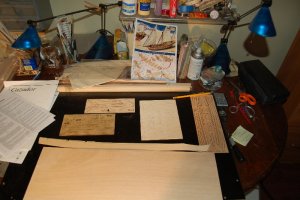 I have several Occre kits but have not built any of them. Will be interested to watch you build this one.

Another Xebec, fabulous . They are becoming a popular subject for ship modelling.

I've just finished mine. It was a real pleasure to build. Lots of wood leftover.

The only issue I had was the belaying & rigging plans. In the end it was a feels right, look good. to me.

Also the rigging line is not sufficient. I ran out of the .5 natural. An Amati thread replacement was needed. for the final sail rigging.

When you come to the rigging have a good look a the plans and I suggest doing the inner mast block rigging first. I followed the a-d plans and it was very fiddly getting hands in past other lines( broke a few).

It makes up a decent model, that is no to complex or difficult.

Thanks to all for comments.
I confess that I have progressed somewhat on this build b4 setting up the log, so I will bring it up to date.
Removing parts from wooden sheet went smoothly. The parts appear to be die cut rather than laser cut. False keel and frames appear to be plywood. Much stronger than the last model I built. All fit snugly with almost no sanding. Used small pine blocks at the under deck joints of keel and frames to ensure a perpendicular fit. This is not absolutely needed but it was something that I had issue with on other build. The lower (and upper) deck is plywood with 2 compound curves, It did not just snap into place. Used push pins and rubber bands plus quick dry adhesive to muscle it into place. Instructions say to use brass nails and grind off heads. Sounded messy but as I found out on bulkhead install the heads come off smoothly using a flexible abrasive disc on power tool(you even get a mini stream of sparks (woo hoo). In planking the deck I used kit furnished wood in lengths of 3,6,9 cm. but mostly the 9cm lengths.Lined the interior of frame 9 and transom per directions.Planked uper deck. 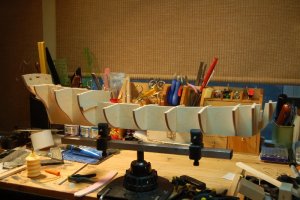 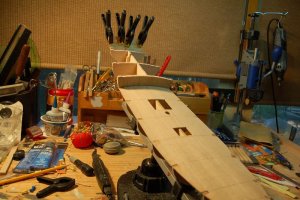 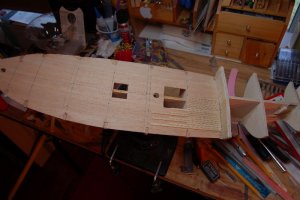 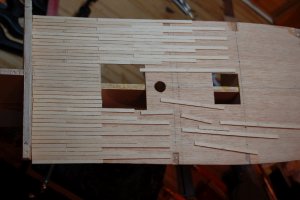 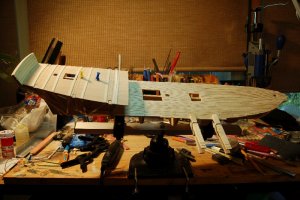 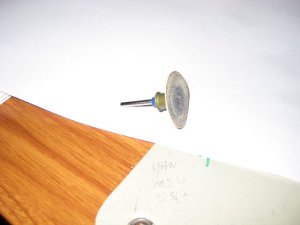 Steady as she goes!!! Looking good.

Continuing with update of build progress, I next installed bow and stern false keel reinforcements and sanded to fit. Next glued on below deck reinforcements which aid in installation of bulwarks. I was a little confused about these as the pics do not show clearly how they are positioned. Ultimately I followed the instructions to be sure they "stick out a little". I guess the idea is to give the bulwarks a step on which to sit. The lower bulwarks are next. Made of plywood they, port & starboard, need a fair amount of forming, mostly at the bow but also critical at stern. I was afraid to soak or steam (de-laminate?) so I applied moisture with a wet cloth and formed using my handy hair curler. Eventually I was mostly successful. I did the forming before lining the interior of bulwarks with furnished ramin wood. Plan calls for use of contact cement. I used Titebond wood glue instead (not as messy). I think this was a mistake because when mounting starboard bulwark, the lining pulled away as I pushed it to fit and later when opening the gun and oar ports some of the smaller lining parts popped off. I think the contact adhesive might have prevented this. I used CA to glue on and added brass nails at the stern, grinding heads off as described earlier. The upper bulwarks mounted flawlessly and required no preforming.
I still have a little catching up to do to get me to where I stopped before starting this log. Will cover in next post.

I would appreciate any comments on my log. Am I too wordy? I know much of what I describe must seem elementary to many skilled builders. If I am I can cut back on some of the description.
thanks
sideliner 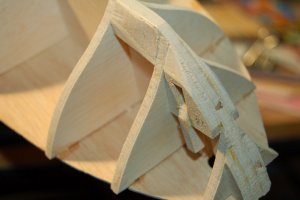 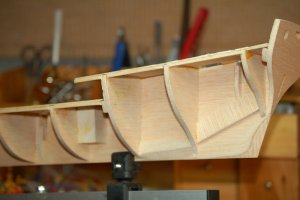 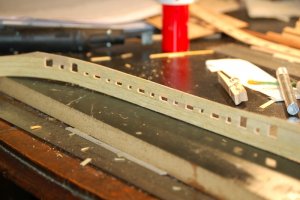 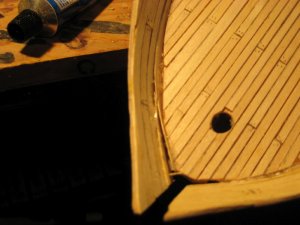 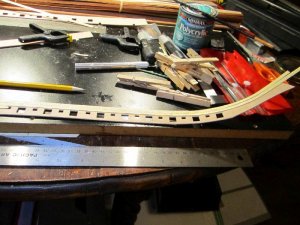 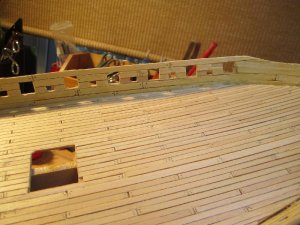 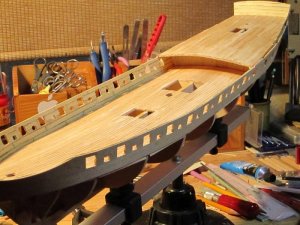 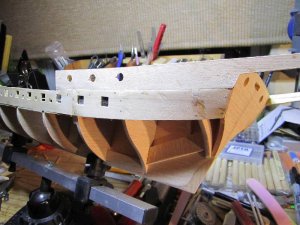 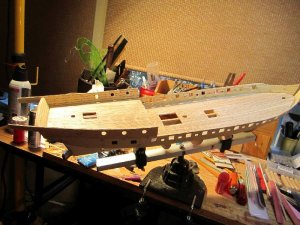 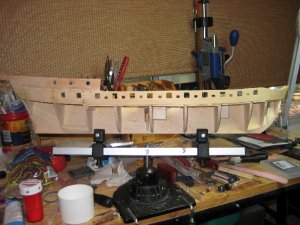 Good morning
Here is the last of my catch up photos. I will be starting hull planking shortly and this time I plan to really try to fit planks in position and not force fit. The attached pics show stem and keel installed. No problems there. Next was lining of transom. I drilled two 1/32 holes in post and pinned it to transom to guide in lining using furnished sapelli (also known as African mahogany) strips. I deviated from plans which said to totally plank hull before installing keel. I felt that I would rather have the keel in place when installing planks, especially the garbard plank. We will see how this works out as I progress. 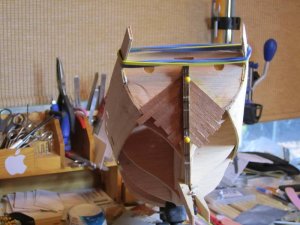 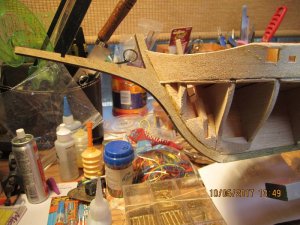 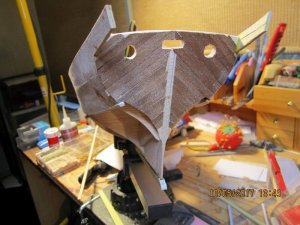 Xebecs are such lovely ships! I like what you are doing!

well done keep it up.

Hi Sideliner,
I found it helpful to make up a single cannon carriage and fit its wheels and the barrel in place. Then you can use it as a gauge for temporarily placing it on the deck and determining whether your gun ports are too high or low.

I did this with my Xebec and it was helpful to get the correct run of gunport heights in relation to the deck.

Thanks for comment, guys, and Brian I will pre-build a cannon for port height check.
In the meantime, I am beginning the planking of hull and immediately have a small issue. Please note in attached pics that the transom takes a jog from a smooth vertical flow. My concern is that the first plank following this jog creates a small overhang of the deck. This may be intended by Occre but I don't see it on other builds Re: Paul V's superior build log here on SOS and it's not visible in instructions. Did I miss something in frame attachment? Also plank shown is just for illustration. Actual will be 2mm (5/64in). 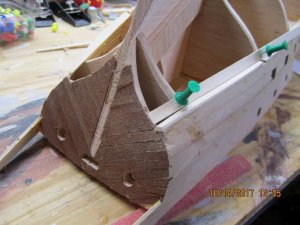 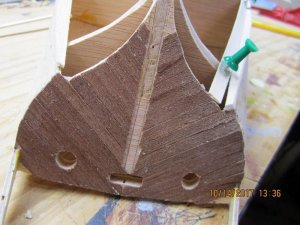 She is coming along nicely!
W

I just won the old Aeropiccola Indiscret Xebec on eBay. I am curious about how the different kits compare.

Not sure how they differ. Are you starting a log. So far each manufacturer seems to have a different approach. Another xebec on this site is totally different.
sideliner

The planks just fit against the hull, & edge of upper formed ply. Your rear bulkhead, should be a smooth shape curve from top to bottom. Looks like you put a plank on face wise at the start rather than edge. should be easy to fix. Your ply upper looks like it is also sitting above the deck. It should be flush on it. you may have to sand the edge of the deck so that he planks fit edgewise hard against the ply . Its all fixable and not a major problem, just take your time.

I suggest that you tear off * (sand) the planking on the rear bulk head so you can see the shape clearly. Plank all first planking then re add the rear fascia planking. ( They give you heaps.). IT looks neater in the end run and you avoid damaging any fascia.