Shipwrights,
On my second build. It's a Mantua Cutty Sark 1:78. This is probably a kit manufactured in the early 90s. I'm finished with first layer of hull planking. The next step is to lay the copper sheathing at the top edge of hull, all the way round the ship.
Unfortunately, this sheathing, plus all the windows and miscellaneous stuff like decorative name plates are simply part of these copper sheets, sort of like how you'd get photo etch parts included with or add ons to plastic model kits. With one giant exception. They are not precut. These parts are defined by being shaped and formed as "thicker" parts of the copper sheets.
And of course, none of the lines are straight...
I still suspected I'd have no trouble removing them: simply get my x-acto razor knife and carefully cut along the raised edge of the part to separate it from its sheet.
First problem is: the copper sheets are rather thick to begin with. And I've spent the last 20 minutes carefully scoring the line with my very sharp knife of the very first part I'm attempting. After multiple draws across the line/edge, I'm not close to creating a cut. And yes, I've begun to exert some serious pressure as I get more confident the cut is not going to wander as I draw the blade across.
Second problem: the parts are too close together to even think about using sturdy scissors. Plus I suspect scissors would deform the shape of these parts too much to make them usable.
My next attempt without any advice from folks that have solved this issue already is to try the dremel tool with a cut-off wheel. But I suspect this will be less than ideal, as I know how "tough" copper is, from my experience of drilling copper buss bar many times as an electrician in my youth.
Hoping somebody here has solved this issue in the past...

Hallo Sid,
maybe it would be good, if you could show us a photo of the copper sheets, so we can get a better understanding of the problem (you described it well, but often a photo is helping in addition)
Normally the copper sheeting plates of this kit are already separated in a small bag, like this one here 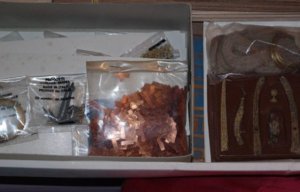 BTW: I found some photos on a web-page showing some working steps of the coppering:

Here's pictures of the parts I'm stumped as to how to safely cut them from the sheets...
I contacted Mantua because this same model now is shipped with precut, even embossed examples of these parts. They gave me a quick reply, but it's looking like it would cost around 179 pounds to buy and ship from Britain. Yikes again. Didn't look up the exchange rate but I'm feeling its well over $200 american... 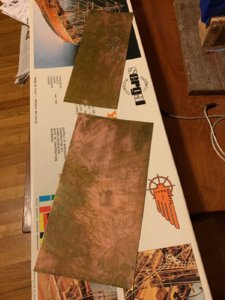 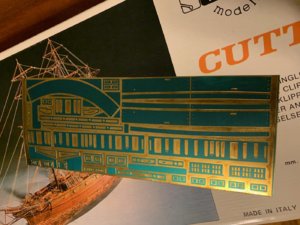 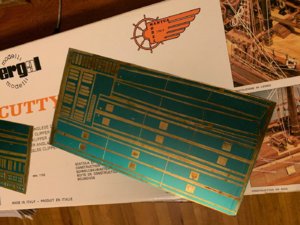 Hi Sid,
I would suggest you replace the copper sheets with copper tape and make your own - i have listed an example: Copper Tape , but there should be many other places selling it in different widths and lengths.
The photo etched stuff is a different kettle of fish - a jewelers coping saw or a scroll saw and a steady hand might do the trick.
Good luck

if you can get acess to a large paper guillotine that will work.

Get a carbide scriber and scratch along the edges. They should pop out. Micro mark mini tin snips are pretty maneuverable as well:

All good suggestions...but the 179 pounds is sounding mighty good considering the worth of your time and patience! The current exchange rate makes it $231.52

All great suggestions folks. Alas the paper guillotine won't work coz of zero straight lines. Carbide scriber, perhaps... But the item the piqued my interest was the mini tin snips. I know certain types of scissors would work, but at the cost of distorting the materials, I fear. I am going to pop over to the micro mark site and take a look. I may also invest in a scroll saw at some point. I just wonder if any scroll saw would handle copper sheets without securing the material to prevent the "stickiness" of copper from gumming up the teeth plus stretching the item to be cut. I don't know of course, I've never attempted it. I only know the experience of working with copper (cutting, drilling, bending) when I was a young electrician working on electrical distribution equipment.

Scroll saw would work very well...just get the right blade...very fine teeth with very low offset if any. There are also diamond abrasive blades with no teeth. It will all be in the blade...

was doing a search and ran across the, maybe it would work for what you need

Rio Grande jewelry making supplies for the best in jewelry findings and gemstones, tools, jewelry supplies and equipment, and the packaging and display items essential to the success of your jewellery business since 1944. Rio Grande offers competitive pricing, excellent service, ordering...

Thanks for your research!!

firedog5213 said:
was doing a search and ran across the, maybe it would work for what you need

Rio Grande jewelry making supplies for the best in jewelry findings and gemstones, tools, jewelry supplies and equipment, and the packaging and display items essential to the success of your jewellery business since 1944. Rio Grande offers competitive pricing, excellent service, ordering...