Zwarte Zee, a sea-going tugboat from 1933

André de R. said:
The Zwarte Zee, which I am going to build, is the third in the row of four tugboats from L. Smit & Co's International Tug Service, bearing this name.
In 1933 the Zwarte Zee came into service. The Zwarte Zee was not only the company's flagship for years, but also the world's strongest sea tug until the Clyde came into service in 1957. The ship was designed to compete with the Seefalke, equipped with 4,200 hp diesel engines, from the German company Bugsier. In order to be able to quickly reach ships in distress, the Zwarte Zee designed with a top speed of more than 17 knots, a very high speed for a tug. The ship cost 600,000 guilders, a large sum for that time and partly a gamble due to the crisis.

For the construction I use the drawing from NVM (Dutch Association of Modelbuilders) no. 10 14 038. It is the intention that the ship will ever sail (RC).

Hallo André,
we wish you all the BEST and a HAPPY BIRTHDAY

The older we get, the more toys we have.

Hi André:
I just want it to show you that Im a "TUG LOVER".
Here is one that Im scratched building.
Its calle "Statia Relaint".
This vessel was buit in 2007, by the ZAMOKANA YARDS of the Canary Islands (Hull#658) as the Statia Relaint for the SeaBulk Inland Transportation Company. A foreign operating subsidy of SeaBulk Towing Services Incorporated of Fort Lauderdale, Florida, very close to where I live.

The towing equipment consist of Iberc Towing Winch, with windlass. 2,2969(ft) of 1.9 (in) towing wire, with tow hook, and a deck crane.

Here is how I started to build her after I found the original blueprints on line. 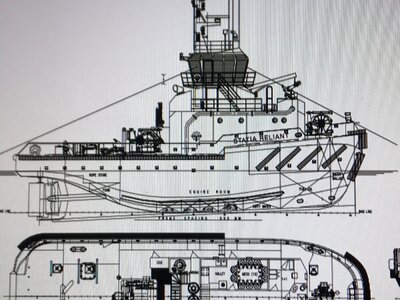 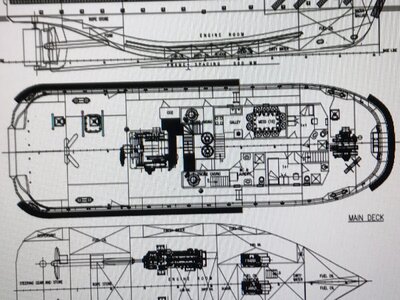 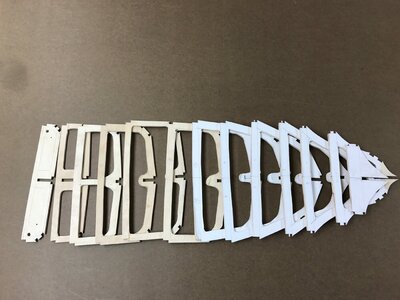 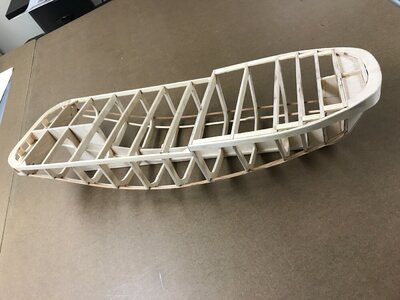 I have the fittings printed 3-d at Shapeways. I make the designs using PTC elements. A nice working 3-d design program.
Although the drawing of the windlass is rather unclear, I was able to make the following design with some improvisation. 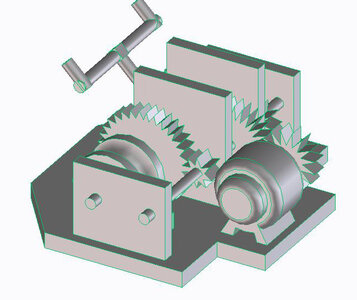 After printing it will look like this on the ship. 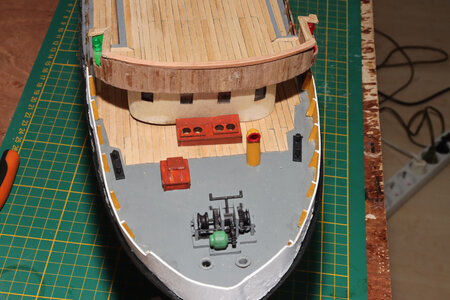 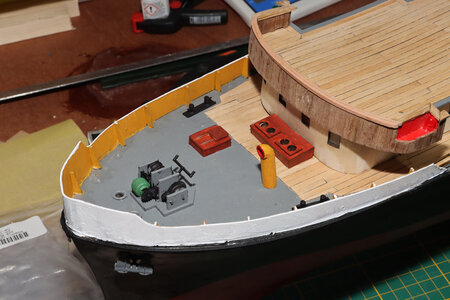 I made the sloops from a piece of balsa that was then sanded to shape. Covered with a tarpaulin. I had the davids printed at Shapeways. 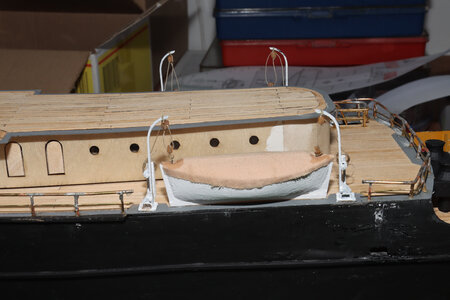 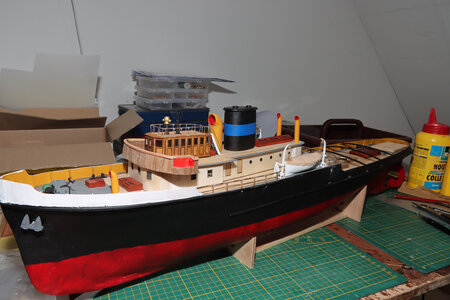 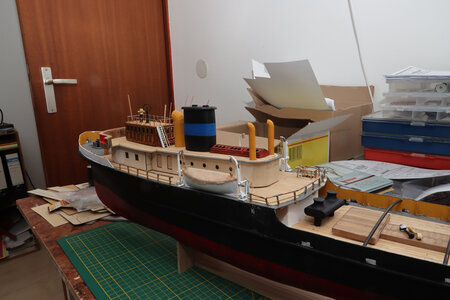 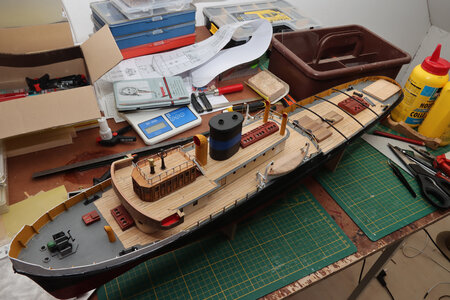 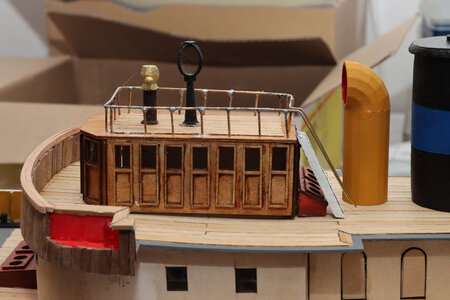 The anchor is also a 3-d product from Shapeways. 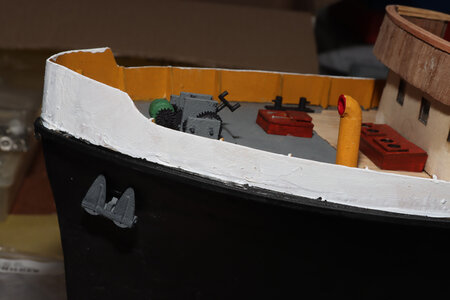 Unfortunately, the second test in our pond showed that the metacentric height of the ship is too small and perhaps even negative. In simpler terms, the ship capsizes. Unfortunately, it turns out that this construction method requires too much space within the ship, causing the battery to get too high in the ship. I am going to build a second hull of epoxy with fiberglass using this hull as a mold. I hope it will be okay then.

Hi Andre,
You make a nice progress with your Zwarte Zee. Better a capsize then sinking . Enough space for some weight.
Regards, Peter

The old hull has now been stripped of the deck and superstructure. The hull was then rubbed about 7 times with release wax to serve as a plug for the new hull to be built. The hull is then constructed from two layers of twill fabric of 300 g / m2 impregnated with epoxy. 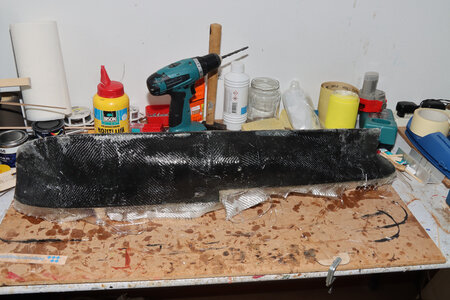 The excess glass mat at the top of the hull is cut with a grinding disc on the dremel. After which the struggle to separate the hull from the plug can begin. Despite the release wax, the hull was very attached to the plug. 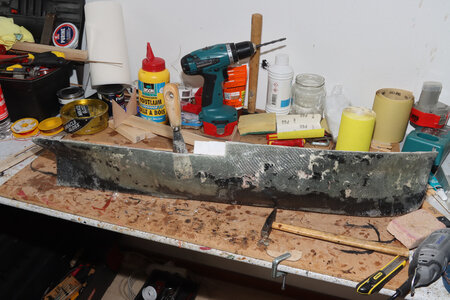 After an afternoon of tinkering with putty knives and pieces of airplane plywood, which are poked between the hull and the mold, the hull finally succeeds in separating the plug. 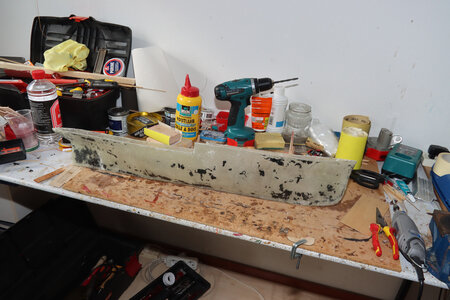 Despite the fact that the skin thickness is only 1 mm, the strength of the hull is not that bad for me. Nevertheless, I still glue 15 frames in the hull with epoxy glue. 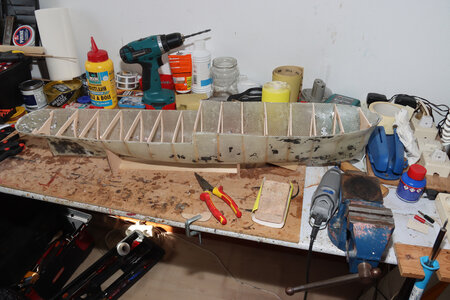 I coat the hull again with epoxy to hide the glass fabric structure as much as possible.